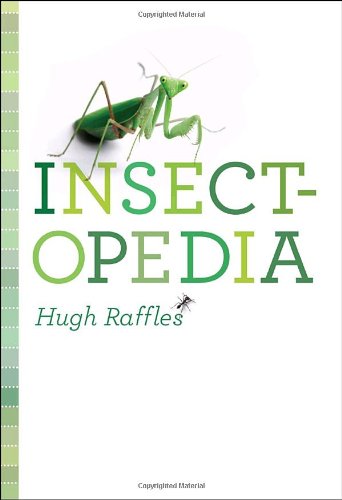 It is surprising that a Web search did not turn up a blog for Hugh Raffles. Like all the best bloggers, Raffles is an accomplished essayist, and Insectopedia, a collection of 26 essays around the theme of insects, is the proof. The title, suggesting an encyclopedic treatment of the subject, and the 26, alphabetically-ordered chapter headings, is just a bit of presentational whimsy. This is a book of essays, some long (42 pages) and some very short (just 2 pages). One might say it is a book you could dip into, and perhaps you could, but not this reviewer. Once started, the whole book had to be read from cover to cover.

Raffles is an excellent writer. His style is light and lyrical and absolutely not what you expect. His theme, insects, takes him around the world and backward in time (especially to the early 20th century and the late 19th century.) He takes in the politics, anthropology, and personal sides of our relationship with insects, as well as treating us to some of the science. He covers cricket fighting in China, biographies of entomologists, the art of Cornelia Hesse-Honegger (who depicts insects deformed by radiation), aerial surveying of insect populations, locust migrations in North Africa, sex (sex-play between species, insect-related sexual fetishes in humans, and the economics of courtship gift-giving among flies), and plenty more.

Each essay is a treat and a surprise, each one a new and fresh approach to whatever its subject might be. While the human-insect relationship is the dominant theme—and one Raffles is peculiarly ambiguous about—there are other motifs in the book. Raffles displays a strange anthropomorphism toward his six-legged subjects, a tendency to talk in high literary terms about them.

His essay on bee vision, for example, makes the simple point that the interpretation of perception is something negotiated between an organism and its environment over time. Yet Raffles invokes economic models, history, politics, and aesthetics, as well as science, in discussing bee vision primarily to push us out of a purely mechanistic view and toward one that allows our six-legged fellow-travelers to share some more human traits: personality, likes and dislikes, thoughts, and feelings. He's not saying they’re just like us, but he is saying that, maybe, they’re not so different.

And why not? There is a powerful reaction building these days among scientists against the received wisdom that human cognition and human emotion is special. Increasingly, the emphasis is on cognitive and emotional similarities between ourselves and other animals. Insectopedia can be seen as an extreme statement of support for that theme. Extreme because even Raffles is well aware of how alien insects seem, how utterly, scarily unlike us they can be. His essays return to both points again and again.

Another recurring theme is that of how attached to insects people can be. There are many passages that stay with one: the naturalist Jean-Henri Fabre lying on his belly hour after hour, full of excitement, watching wasps capturing and immobilizing larvae for their young; the intense care, grooming, and training of fighting crickets in China, with all the specialist paraphernalia and folk wisdom it involves; and the striking comparison between how Italian children in Florence once cared for and loved crickets, and the Tamagochi craze that once swept the world. It is probably on this theme that Raffles’ writing is at its most exalted.

Insectopedia is not a book of science, although there is much science in it, and it is not a book about insects, not really. It is a book about us, and the part that insects have played, and still play, in our lives: as objects of fear and loathing (he draws our attention to the comparison made by the Nazis between Jews and cockroaches) and as objects of admiration, compassion, and even love.

As a scientist, I found some of Raffles’ speculations almost mystical (“Yet, if cognitive processes are irreducible to electrochemical function, what exactly are they? Nobody seems very sure.”) Yet it is hard to be irritated with someone whose main purpose in writing this fascinating book seems to be simply to ask us to have an open mind.