The Innovators: How a Group of Hackers, Geniuses, and Geeks Created the Digital Revolution 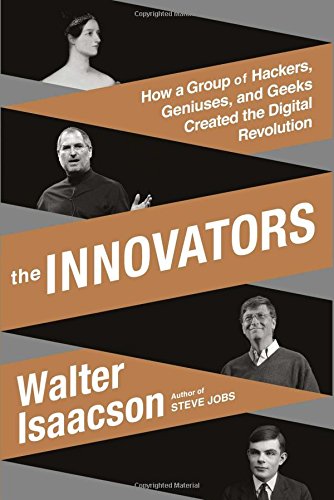 “relish The Innovators. If you love technology, it’s a rollicking ride.”

Walter Isaacson is the master storyteller of the digital age. His towering biography of Steve Jobs, based on extensive interviews in the months prior to Jobs’ death, is the defining work of our technological times. Now Isaacson returns to the bestseller list with The Innovators: How a Group of Hackers, Geniuses, and Geeks Created the Digital Revolution, which tells the stories of the inventors of computers, from the 1840s to the present day.

Ada Lovelace was the daughter of Lord Byron and, in the 1840s, one of the earliest innovators in the field of computing. Most of Isaacson’s subjects in this book are male, so it’s quite striking to find a female innovator launching what became the computer era.

Isaacson details successes and failures, alliances, and lawsuits, collaboration and idea theft, those who made fortunes and those who died penniless. He brings alive the personalities over a 170-year period, whose brilliance, sacrifice, hard work, and marketing acumen made possible the wondrous devices that today we practically take for granted.

The 19th century stories are by nature shorter and less detail-rich than the stories of the innovators of the last fifty years. That makes sense; there’s simply less source material about them, and they certainly aren’t available to be interviewed. But the 19th century section of the book offers surprising insight into individuals whose names might otherwise have been lost to history, whose contributions to computing were substantial and became the foundation for what modern technologists do today.

The book is not just about computers. Computer games and the Internet itself are subjects Isaacson treats with fascination and a keen eye for great stories and intriguing detail. For example, there’s a story of Nolan Bushnell and the invention of Pong, a now-prehistoric computer game, all the rage in 1972. Bushnell tried out a Pong prototype in a seedy bar, where guys played pinball in the back. After a day or so in use, he got a call that there was something wrong with the machine. He rushed over, fearing all manner of technological mishaps. Instead, Pong had become so popular, perhaps because it’s a great game to play while drunk. The problem Bushnell diagnosed:  the place into which you packed quarters had become so jammed that money was spilling over onto the floor and the machine simply couldn’t accept any more money.

Bushnell, Isaacson recounts, told a high school class that he used as a model for Pong ads a topless dancer from a strip club near his office. Isaacson notes that the high school students were puzzled—they weren’t quite sure what a strip club was.

The fact that out of all the stories in the book, that’s the one that entertained me the most probably says a lot more about me than it does about Nolen Bushnell or Walter Isaacson. But it’s still an awesome story.

Similarly, you might think you know Bill Gates, or Steve Jobs, or the folks who created the Internet. Yet Isaacson shows you aspects of their lives that don’t turn up anywhere else. An example is a story of how Bill Gates was discussing a particular computing problem in the dining area of his dorm room. Another student, also a computer geek, piped up and mentioned that he knew how to solve that problem.

As it turned out, he did, and Gates paid him $400 for his services. The guy went on to make millions as a Microsoft employee. Isaacson noted that it paid to be at Harvard, because there you would be surrounded by other math geeks, who could lighten your burdens.

Isaacson then recounts the eureka-like moment when Gates’ first computer prototype correctly identified that two plus two equaled four. It might not seem like that big a deal today, but at the time, it was everything.

Isaacson’s previous works focused on a single individual, like Steve Jobs or Benjamin Franklin, which makes this book very different. It’s a much bigger challenge to create a throughline over the course of 170 years, with a cast of characters sweeping across the decades and located from Britain to Massachusetts to California. But Isaacson pulls of what would be an impossible task for pretty much any other writer. If you want to understand exactly how it came to be that your laptop or cellphone can do a lot more than play Pong or tell you that two plus two is four, you’ll relish The Innovators. If you love technology, it’s a rollicking ride.