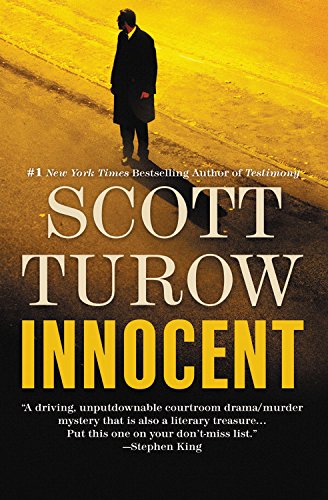 No one writes better courtroom dramas than Scott Turow. In Presumed Innocent, he told us the story of chief deputy District Attorney Rusty Sabich. When Sabitch’s Midwestern boss loses his re-election bid, Sabich—who is married—is charged with the murder of a former colleague-mistress. His prosecutor is Tommy Molto, a lawyer who started in the office at the same time as Sabich.

With this novel published in 1987, Turow created a new genre: the crime novel with the shocking and surprising ending. All of a sudden a number of novels ended with an unexpected twist and such endings came to be known as “Turow-style endings.” One of the best recent examples of the application of Turow’s style was Tell No Lies by Julie Compton.

Now, after these many years, Turow has done something he said he would never do, which is to provide us with a sequel to Presumed Innocent. Boomers are going to buy it by the millions no matter what the reviews might say. As one avid reader said to this reviewer, “Everything Turow writes is going to be big.”

With Innocent, we reconnect with Rusty Sabich, who is now a state appeals court judge seeking a seat on the state’s Supreme Court. Things look promising for Sabich, except that his brilliant wife has been quite ill, and he’s once again made the mistake of taking a mistress—one who is literally his lawyer son’s age. When Sabich’s wife dies in bed, he stays with the body for 24 hours before contacting the police. This is rather odd behavior for a judicial officer, and Tommy Molto—the man who earlier unsuccessfully prosecuted Sabich—now sees a chance for a rematch.

So, yes, this is a re-mix of the earlier story contained in Presumed Innocent. The protagonist and the main characters remain the same, if only older (an aspect of the story that Boomers will latch onto). No one, however, appears to be any the wiser.

As always with Turow, the courtroom scenes soar even if the rest of the telling is more down to earth. Turow presents the criminal justice system as a gritty one where normal people are “caught in the thresher called justice.” This is not your sanitized version of justice. At one point a fellow prosecutor suggests a theory of Mrs. Sabich’s death to Molto and he shakes his head in disdain: “It sounded like ‘Law and Order.’ A little too tidy.”

In real courtrooms, justice is not tidy, pretty, nor predictable. If there is one thing that Mr. Turow should be credited with, it is with getting this message out. The criminal justice system is staffed with dedicated and talented professionals, but often even they cannot see what’s coming around the next corner. In Innocent, prosecutor Molto is doing a bang-up job examining Sabich until he makes a cardinal mistake: asking a question for which he does not know the answer.

Little more should be divulged about the plot except to say that the story is resolved before one arrives at the final page. This will likely surprise some of Turow’s fans, but he has matured and has no need to make use of the literary device he invented. Is Innocent just as good a read as Presumed Innocent?

In the opinion of this reviewer, Innocent comes off as a four-fifths scale version of Presumed Innocent—which means it is nevertheless better than 95 or so percent of the courtroom dramas you can find out there. See, no surprise ending here.