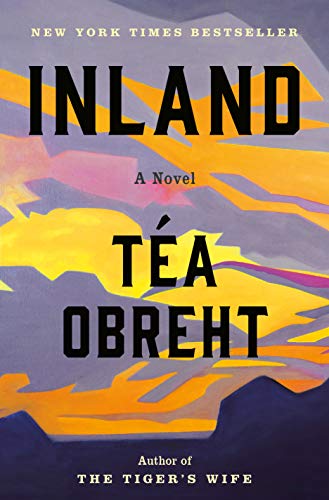 The braided narrative is not a new novel form. Authors have long used interwoven but seemingly disparate plotlines to achieve a whole that is greater than its parts. These plots are sometimes separated by time—years, decades, or even centuries—or in some cases unfold contemporaneously. One of the simpler pleasures of reading such a novel is discovering the connection between the two narratives, something not always readily apparent.

Barbara Kingsolver’s Unsheltered is a very recent example of the form, with two stories that occur at the same New Jersey address more than 100 years apart. Let the Great World Spin by Colum McCann is an example from earlier this century, with several narratives linked by a single background event. Ultimately, the reader expects that the resolution of these various stories will shed light on how and why they are connected.

Téa Obreht’s new novel, Inland, is the latest braided narrative to emerge, and astute readers may recognize the connection between the two threads right away, while others may take a bit longer to catch on. The first narrative focuses on Mattie Lurie, an orphan of Levantine extraction who falls in with a group of cameleers, men crucial in exploiting an imported herd of camels thought useful in the parched desert of the American Southwest in the mid-19th century. This story, unfolding over four decades, is told in sections named after the various rivers that outline Lurie’s journey and is addressed to someone named Burke, who, we eventually realize, is Lurie’s camel and constant companion.

Alternating with the story of Lurie and his camel are sections named after times of day that tell the story of one day in the life of Nora Lark, a woman who has accompanied her husband to a homestead in Arizona and in 1893 is struggling to survive. Their life is harsh and in recent years has become nearly unbearable owing to the scarcity of water. Given her struggles, one might forgive Nora for becoming increasingly unhinged as the day wears on, although she never quite wins our sympathy.

The two narratives share some common themes and elements. Nora communicates with the spirit—or perhaps the imaginary spirit, because she insists she does not believe in the paranormal—of her daughter, Evelyn, who died as an infant. At the same time, Nora abuses her servant, Josie, for reaching out to the spirit world and encouraging Nora’s son to believe in ghosts and monsters. Josie is “fixed in her belief that spirits, occupying the self-same plane as their living counterparts, could announce themselves by script or knocking. That they could be summoned from their heavenly abode to appease human frailty and frivolity. Called down from Heaven for confessions and parlor tricks.”

Lurie, on the other hand, frequently encounters the dead who, because of the violence of the time and his rough lifestyle, are particularly plentiful. He discovers that the dead are not aware of each other, however, only of the living, when he comes across the spirits of a family slaughtered by bandits. They aren’t even sure they’re dead. When he first encounters his friend Donovan’s ghost, for example, the spirit remarks, “I was in the square. Then I fetched up here. But I can’t remember how.” And Lurie observes, “His sour maddog look was softened by his general lightness, that fearful disconnect that sits in the hearts of all the dead.”

The characters in both stories are deeply affected by water and its absence. Nora’s spring is dry, and on this day her household is completely without water, adding to her distress. Lurie also encounters dry spells, but as the master of a camel, he has a tool that is less water-dependent than other travelers, since the camel can go several days without taking on water.

Being on the run is another common theme. Lurie is constantly running, even as a child when he and his father flee to America. Speaking to his camel, also on the run, he says, “And wasn’t I right to wait—for habit if nothing else? I knew you had flight in you yet. You still do; as do I, as I have all my life—since long before we fell in together, when I first came ’round to myself, six years old and already on the run. . . .”

Later he kills a man in a fight and is from then on constantly running from the law (with shades of classic pursuit stories like Butch Cassidy and the Sundance Kid), from time to time over the years encountering John Berger, the marshal who has been hunting him. Later, when Lurie and his partner Jolly acquire a valuable gold-veined stone, he is again on the run from those who would steal it or his camel.

Nora is not yet on the run, at least not literally, but it’s on her mind as a way to cope with her troubles. She had considered it much earlier, during another unhappy episode on the frontier, and she’s considering it again now, particularly because she suspects that her husband, Emmett, has also run off. Her sons, too, Rob and Dolan, are on the run, for reasons that she doesn’t yet understand.

Both Lurie and Nora are aware of the danger of “depredation,” a word that comes up frequently in both narratives: “With our already meager forts drained by that Baylor nonsense to the south, and by war in the east, the only thing on anyone’s lips was depredation. We were forever fearful that the Utes would come flying off the range to butcher us; and the Utes were themselves fearful of us, and we were none of us too keen on the Mormons generally.” Given her fondness for the word, Obreht must mean more than the common attacks by Indians and bandits, and perhaps she is referring to the constant assault on humanity that the frontier hardships brought.

While each of the two narratives is engaging in its own way, the link between them is tenuous. In fact, that link seems merely coincidence, a bit too cute, and that is a serious flaw. Furthermore, Lurie’s story is a picaresque tale, full of entertaining adventure and displays of imagination, but one without plot. The more compelling story is Nora’s, but it leaves the reader with far more unanswered questions. Although the whole is an entertaining read, ultimately it isn’t fully satisfying.