The Initiates: A Comic Artist and a Wine Artisan Exchange Jobs 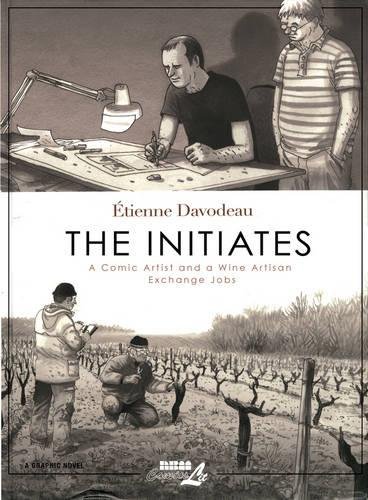 “. . . this book will teach [you] something new in an entertaining form.”

Most people, when they drink a glass of wine, have little sense of the work that went into producing that wine. The details of how grapes are grown and wine is made may be too dull to entice wine drinkers to want to learn more. But putting the process into comic book form may provide a more painless way.

Richard Leroy is not from a long line of winemakers. He was a banker in Paris who decided to go into winemaking. He bought some land already containing old vines in the Loire Valley, and proceeded to make wine, first dessert wines, then solely dry wines, from 100% Chenin Blanc.

Comic book artist Étienne Davodeau proposed to Leroy to join him for a year at his vineyard and winery, while Leroy would join Mr. Davodeau for a look at the world of comic book publishing. The result is this comic book, or graphic novel, if one prefers that term. It was titled Les Ignorants in French.

Leroy gets by far the better end of the deal, as he has Mr. Davodeau help him with the pruning, weeding, plowing, spraying, and harvesting the grapes, while all Leroy has to do on the comic book side is read some books, go with Mr. Davodeau to visit his printer, publisher, and other comic book artists, and go to a comic book convention.

The reader gets a high-level look at the stages of grape growing and wine making, especially getting an introduction to the oddities that go into growing grapes not only organically but also biodynamically. In part, this entails spraying a mixture of cow manure that spent the winter buried inside cow horns. Only a tiny amount of manure is sprayed over the vineyard, but proponents of biodynamic farming believe that this improves the life of the soil.

At one point, “Robert Parker’s assistant” comes to visit to sample the wines. He is later identified as David Schildknecht, and he is recognizable as drawn. He paces among the barrels by himself, sampling and muttering notes into a Dictaphone. Leroy talks him into visiting the vineyard, but he barely stays and drives off to catch a plane.

Later Leroy gets Schildknecht’s notes. “The comments are full of praise, and the Rouliers [one of Leroy’s two vineyards] remains in the royal clan of the 90/100. But Montbenault has slipped to an 87. The critic notifies his readers of an eventual ‘slight oxidation’ over the long haul.”

Leroy fumes: “Ah, it’s always the same! Compared with the wines he’s used to drinking, I fully understand why he doesn’t understand me! I’m taking an approach that’s still too much in the minority for him to comprehend it effectively.”

Naturally, this reviewer had to try the wine. It is available in only one store in the Washington area, a rather specialized shop featuring only one importer. There, the cashier knew all about Leroy’s wines, had just visited Leroy in France, and knew about the French and Spanish versions of The Initiates. He recommended that the 2009 Les Noëls de Montbenault can be drunk right away, but that the 2010 Les Rouliers needs to be aired for a while before drinking.

The Montbenault is being sipped while this review is being written. Right away, a characteristic that could be described as oxidation is noted, but it is not really that. Rather, the wine is full-bodied, with a rich complexity of aromas and flavors, spices and minerals, and a wonderful, lingering finish.

It is, in short, a spectacular wine, which should be rated far higher than an 87. At $40 a bottle, it is not an everyday wine, but comparable quality wines from, say, Burgundy, or even the more well-known Loire producers, would cost far more. It is also not an entry-level wine in that casual wine drinkers may not find it to their liking. They may also be alarmed by the tartrate crystals at the bottom of the last glass.

We are less familiar with the comic book artists that they visit when Leroy explores Mr. Davodeau’s world. Fans of graphic novels may recognize Lewis Trondheim or Emmanuel Guibert, whose works make it over here in translation. We, along with Leroy, meet and learn about the different artists and their styles.

The illustrations, in black and white, are relatively simple but expressive, and convey the grape-growing and wine-making processes well. The extent to which this is hard work, especially for organic and biodynamic vineyards, is vividly portrayed. The prose is not electrifying, and, naturally, is mostly dialogue, but it accomplishes its goal of teaching us about the worlds of wine and comics.

It is hard to decide who the potential audience for The Initiates is. Graphic novel fans may find the subject matter too unusual, while readers interested in wine may find the format too unusual. Both groups, however, may want to stray from their comfort zones, because this book will teach them something new in an entertaining form.