Inhuman Land: A Wartime Journey through the USSR 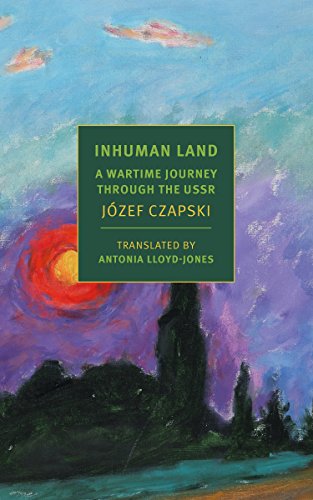 “Inhuman Land is a vivid lesson of what that war entailed, conveyed with an artist’s eye, and well worth reading.”

My parents first introduced Czapski’s memoir, the1962 Polish edition by the Instytut Literacki in Paris, and later the 1987 English edition, published by the Polish Cultural Foundation in London, to me in the 1980s. I had just embarked on writing their story of deportation, imprisonment, and escape from the Soviet Union during World War II, the same path that Józef Czapski had the misfortune of enduring and about which he wrote in his classic, engaging memoir.

This new English translation by Antonia Lloyd-Jones, from the 2001 Polish version by Wydawnictwo Znak, is extremely well done, while Yale University historian and author, Timothy Snyder (The Bloodlands:  Europe Between Hitler and Stalin, Hatchett, 2012, and On Tyranny:  Twenty Lessons from the Twentieth Century, Duggen Books, 2017) provides illuminating historical background to Czapski’s unique life experiences that enabled him to write such a compelling memoir.

Born in 1896 into wealth and privilege just south of Minsk, Russia, during Poland’s long period of partition by the Russians, Austrian-Hungarians, and Prussian Germans, Czapski came from Polish nobility. Such an early beginning contrasted sharply with the horrors of both world wars he endured, showing how his character from shy, artistic introvert, keen observer of human nature, and pacifist blossomed into fierce-minded fighter and defender of Poland. He takes us on an adventurous journey, his journey, and enlightens us as to the trail of human misery.

Although he was raised as a Pole, he admired Russian literature and the works of Tolstoy and Dostoyevsky, as well French writers, Balzac and Flaubert; his memoir is peppered with their thoughts and quotes. He quotes Polish poets and writers such as Słowacki and Mickiewicz to show us his patriotism to Poland. “I used to leave that room late at night as if drunk, as if spellbound by poetry, repeating the winged lines that I had just heard, lines that even in that place could get through to us and make us happy.” To the Polish poet, Norwid, he ascribes many of his thoughts and recollections with attempts to maintain his sanity while imprisoned in Russia during World War II in the years 1941 to 1942.

Czapski brings his famous artistic painter’s eye from the canvas to the words he writes on the page. Throughout his memoir, no matter how difficult the hardships and the horrors evolving around him, through his writing we see poetic beauty in the landscapes he describes. We learn the history of these seemingly obscure places and peoples in the Soviet Union and the Middle East.

Through his descriptive writing, we are present as he highlights the culture of a people previously unknown to those Polish refugees and prisoners, so summarily scattered throughout the Soviet world during their exile in that inhuman land.

We meet interesting and learned fellow prisoners, later escapees, and compatriots joining the newly forming Polish Army under General Władysław Anders. This is the same army that my father, Polish Lieutenant Wawrzyniec Solecki, joined after his release from the prisoner of war camp at Kozelsk, near the infamous Katyń Forest, where in the end over 22,000 Polish officers and Polish intelligentsia were murdered by the Soviets.

While trying to discover what happened to those missing officers, Czapski includes this rarely told story in his memoir to bring that history to the foreground as an example of the brutality and deceitfulness of the Soviets. The same group of Polish prisoners en route to work in the Russian tundra stopped at Gryazovets in the spring/summer of 1941 when Germany attacked Russia and where Czapski landed. Czapski and this reviewer’s father may have even met there.

With Germany’s attack on Russia in June of 1941, the Polish government-in-exile in London managed to negotiate release of the many thousands of remaining prisoners of war and labor camp workers who had been captured and deported from Poland in 1940 and 1941. Czapski was assigned to represent the Polish government in securing the release of his fellow countrymen and to find out what happened to all the missing officers, as that was slowly coming to light. This release was referred to as a kind of “amnesty,” which suggested that the Poles had done something wrong to warrant arrest and deportation when it was Russia’s mission to annihilate all Poles.

We meet some of these characters along the way who convey the sense of depravity as well as spirit, such as an old Polish Jew Czapski encounters in Moscow while on a mission to help find those missing officers. The man reminds Czapski of beautiful Warsaw when the he talks of that great city and says, “.  .  . I’m Polish too, I’m from the Pińczów area, I was a landowner there. If I could see my country again before my demise, I would die without regret.” This brought Czapski to tears and he writes, “After all this time waiting amid strange and hostile faces, .  .  . thinking gloomy thoughts about shrinking Poland, strangled and slaughtered, the poor Jew’s red, tearstained eyes saved me from total loss of faith and bitter despair.”

Czapski’s memoir is a testimony to the absurdities and contradictions of the Communist system, including its deceitfulness and tyranny, something not widely known in the Western world of the 1940s. “.  .  . it was the normal Soviet attitude toward human beings, to their own citizens, too—extreme wastefulness and disregard for human life, and the same disregard for the tons of wheat we regularly saw at the stations along the way from Buzuluk to Totskoye. This wheat lay on the platform in the snow and rain, not even covered, though guarded by a soldier.”

And later while in Moscow, Czapski observes Russian political attitudes. “I met plenty of people among the privileged strata whose every word was an ostentatious declaration of their blind devotion to today’s [Communist] government and today’s [Communist] system. They were united by a single feature: a total lack of criticism, or worse—a total incapacity to think for themselves.”

In the end, it is poetry that saves Czapski, and he quotes various poets like Władysław Broniewski, who imposed himself for all-nighters at Czapski’s lodging with recitals of his poems. “I never felt a breeze as sweet, as I did then, in prison; now, as I write these lines, I remember a young soldier, and listening hard, to the hush of spring .  .  . I hear these words: Convict, step back—step back from the bars .  .  .”

We see Czapski fall into despair as he witnesses thousands of women and children struggling to escape the Soviet Union from those dreaded work camps when he writes, “.  .  . a sense of the fruitlessness of my work and a diminished will to live .  .  . that ever since leaving actual Poland, my entire life had been an illusion.” He describes these women in poetic misery conveying to the reader the sense of utter hopelessness that invaded their lives. “Most of them were women in rags, often wearing strange foot wrappings instead of shoes.” And then there were the lice and diseases to battle.

Czapski spent a considerable amount of time in Uzbekistan, near the city of Tashkent, where this reviewer’s father was also stationed. During that time, the forming Polish Army was preparing for battle against the Germans in the Middle East and eventually in Italy, and Czapski was assigned to manage the educational department.

His memoir is full of the history and culture of the region as well as stories of his various encounters with people assigned to his department and those Russians assigned to oversee his work. During this time, he meets General Anders and continues to draw on his artistic curiosity and exploration of poetry. Norwid continues to enter his mind when he quotes, “For the land where they gather a crust of bread, from the ground out of pure respect, for heaven’s gifts, I am yearning, Lord . . . for the land where it’s a grave offense, to harm a stork’s nest in a tree, for they serve us all, I am yearning, Lord . . .”

Czapski’s memoir ends with his finally being able to leave the Soviet Union and to continue with fighting the war in General Anders’ Polish Army, like this reviewer’s father, through Iraq, Syria, Palestine (Israel today), Egypt, and finally Italy.

The last part of the book was written as an epilogue some 20 years later and conveys the story of those Czapski encountered later. It has a subdued tone and reads more like a history intertwined with the current political developments of the day. In any case, Inhuman Land is a vivid lesson of what that war entailed, conveyed with an artist’s eye, and well worth reading.