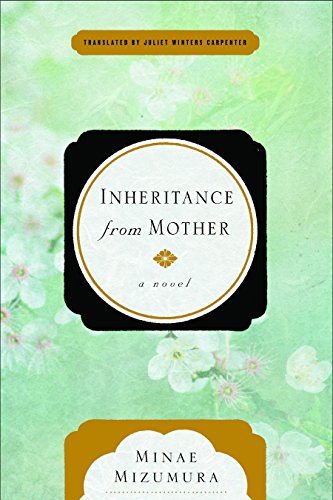 Inheritance from Mother is a novel for the connoisseur by an author regarded as one of the most important writers in Japan today. Central to the novel is the relationship between Mitsuki who studied in Paris but who now lives in Tokyo  and teaches and translates patents; her sister, Natsuki, who studied in Germany who also lives in Tokyo but married into a rich conservative family and now occasionally teaches piano; and their mother Noriko—demanding, pretentious, and yet still inspirational—who dies approximately half way through the book to her daughters’ great relief.

The story moves skilfully back and forth between the present and the distant past of Noriko’s childhood memories of her geisha mother.

Mitsuki was her mother’s least favourite daughter but assumed the burden of care for both her parents in their last days, and cannot forgive her mother for neglecting her dying husband for a late-life fling with “That Man.”

In addition, while caring for her dying mother she discovers, or rather re-discovers, her own husband’s infidelity.

This bleak plot overview cannot do justice to the psychological, emotional, and social class intricacies explored. Nor to the depiction of the complex heritage of modern day Japan.

This is a novel about the choices faced by women, in which love and money are inextricably intertwined. In fact a good many pages are dedicated to the sisters’ sensible calculations of money owed to them consequent on death or divorce. A coolly rational tone is maintained throughout.

Mitsuki’s finding emotional and financial liberation at the end of the novel is surprising and entirely credible, and will not be revealed here!

It would be a great pity if this book were to be dismissed on account of its content as “a woman’s novel”—a term generally regarded as an insult.

The excellent translation by Juliet Winters Carpenter manages both to retain a flavor of the Japanese original, and to spoil the reader for the next ordinary novel they pick up in English.