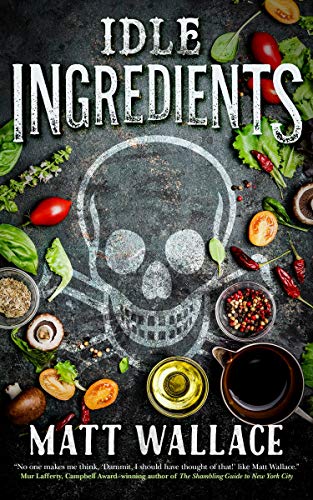 "You're not safe out on your own right now," Bronko tells her. "None of us are."

That is the tone set in Matt Wallace's fourth entry into his Sin Du Jour novella series, a series centered around the Sin Du Jour Catering & Events company that services the paranormal, supernatural, cryptozoological, mythical, and less than human elements of the world. They are called upon to cater events for goblins, demons, and even the producer elite of Hollywood. They do so with professional aplomb while usually having to defend themselves against magic and otherworldly encounters gone wrong. Totally normal for a catering service out of Long Island.

In Idle Ingredients, the Sin Du Jour staff has just come off the events in the previous novella, Pride's Spell, events that almost led to the deaths of every single one of them. Deaths ordered by Hell itself. Disillusioned, afraid for the future, and afraid for themselves, the staff is forced to go on the defensive and take on a new executive liaison sent from their coordinator in the shadow government, a liaison that quickly undermines Head Chef Bronko Luck's authority and takes control in a most deadly way.

Part of Wallace's appeal is his ability to write likable and unlikeable characters and set them side by side without forcing the reader to choose sides. Whether the reader likes them or not, they are guaranteed to entertain. Each character in the series is a perfectly fleshed out individual that helps to emphasis Wallace's sense of satire and wit without becoming over the top caricatures that sometimes fill lesser works of humor.

Filled with the same great mix of humor, action, violence, adventure, and foreboding as the first three entries, Idle Ingredients is the perfect pivot point in the seven book series, foreshadowing a darker, more intense direction for the remaining novellas. Each of the main characters, and supporting characters, are given time in Idle Ingredients, so that whatever plans Wallace has for the final three books, they are sure to be a bit of an emotional roller coaster ride. While nothing explicitly was nodded towards, do not expect every one of the entertaining personalities to make it all the way to the end.

If you haven't had the pleasure of reading the first three books, do so. An ebook bundle has been announced, making it easier to access the series, but they are also available individually in print and ebook format. All of the entries into the Sin Du Jour series are well worth the time and should be read from the beginning as each builds perfectly upon the other. Get started immediately.