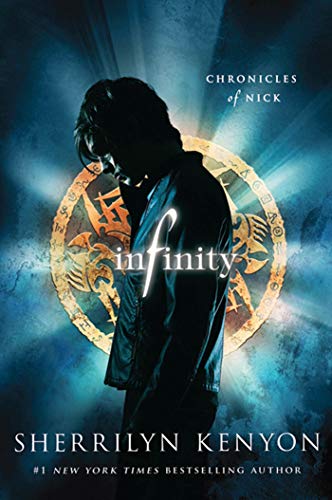 Sherrilyn Kenyon is a prolific writer of a number of paranormal series. Infinity: Chronicles of Nick, a teen novel, is the first in a series for young adults. It is a prequel of sorts, telling the tale of one of her adult characters from his earlier, formative years.

Nick Gautier is a fourteen year-old boy from a single-parent home and the wrong side of the tracks. His classmates at the private school he attends on scholarship never let him forget it, either. Each day is a struggle to find acceptance from his peers, seek understanding from his mother, and keep himself on track so he doesn’t let her down. Nick always knew his father, incarcerated, was a monster and a threat. He just didn’t know he should take it literally.

One fateful night, Nick turns back from joining his so-called friends in a scheme to make a few extra dollars the wrong way. It’s cataclysmic and the beginning of a new era in Nick’s life. If he thought he had it rough before, he hasn’t seen anything yet. He’s about to learn that a lot of creatures exist beyond what mortal man can see or believe and they’re all after him. He just doesn’t understand why. Life’s about to get a whole lot better—and a whole lot worse.

Au currant young adult novels are rife with paranormal elements. I am fond of such and looked forward to delving into what Infinity had to offer, and surprised to learn that a significant focus of the supernatural posse consisted of zombies. The scenes with zombies had a slapstick quality that was less than engrossing. That being said, this is more an issue of the reviewer’s personal preference than an issue with the writing or the story.

Zombies aside, the story is well-written and interesting. Infinity is well paced. The characters have depth, are fleshed out, and reveal many interesting layers to each personality. Supernatural or not, the characters all have varying conflicts that weave and intertwine with one another in a way that keeps the reader engaged and turning the pages. Even the storyline with the zombies, while not a personal favorite, had this reader laughing aloud more than a few times at their antics and how the other characters chose to deal with them. And Ms. Kenyon has done an excellent job of capturing the teen voice.

Nick’s story will be told over a total of twelve books in the series. Zombies or not, the reader is sure to look forward to hanging in for the duration of the ride. This saga will likely only get more engrossing and interesting as the Chronicles of Nick unfold.