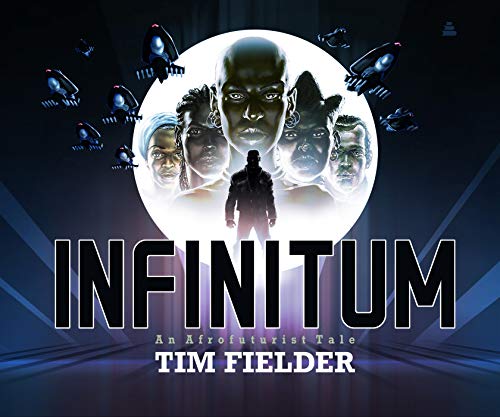 Tim Fielder’s book Infinitum tells the story of Aja Oba, an ancient African king who steals the son of his concubine and is cursed with immortality in revenge. He sees the destruction of his kingdom and the rise of Europe as a global power, the triangular slave trade and enslavement in the United States (where his name is changed to John), wars through the 19th and 20th centuries, and lives into the future, never dying and gradually regrowing any limbs or other body parts he loses through violence.

In the face of an increasingly uninhabitable earth in the near (and then increasingly far) future, John uses his ancient wealth to establish an all-black colony on a terraformed planet. Yet human galactic expansion and conquest eventually lead to intergalactic war with other species, establishing a millennia-long cycle of cultural collapse and resurrection which John observes, manages, participates in, and sometimes guides.

Infinitum is marketed as a graphic novel, but that isn’t quite accurate. It’s closer to being a picture book: each image takes up a full page, and the text appears in blocks largely separate from the images. The resulting book lacks the intimacy of a conventional graphic novel and emphasizes overarching narration rather than character interaction.

John’s adventures are briefly narrated from the margins of shadowy, vividly hued illustrations. After murdering the slave master who torments him, “John hacked his way through the American South and beyond. Notably, he came upon an area he’d visited thousands of years before when his kingdom had been focused on seafaring, exploration, and trade. He had been quite popular with the Olmec people.”

The problem with this kind of history-based approach is that there’s so little time spent in the moment. Anyone John loves introduces themselves on one page with a short monologue, only to be brutalized and murdered immediately after. John’s devastation is graphically rendered, but it’s difficult for a reader to keep up emotionally. With each atrocity, John sinks deeper into (justified) violence, so that his character is subsumed beneath his rage. The shining future into which John enters is only ever sketched out, and its attractions and subtleties are largely lost.

For readers seeking an epic tale of Black triumph, Infinitum will generally offer what they want. This book has a powerful mythic foundation, and its full-page graphics have poster-like energy, such that one can easily imagine them displayed on bedroom walls. However, readers who have more experience with Afrofuturist fiction are likely to find it a limited, unsubtle book. There is little focus on community or inclusiveness. John-the-character vanishes behind John-the-body, making his masculinity a kind of elemental force, in the face of which women can only be sacrificial victims or vindictive witches. In the entire scope of history, the idea that women could have so little significance is deeply discouraging.

Fielder’s book is a cathartic externalization of rage and frustration, but it lacks the optimism and scope of works by contemporary Afrofuturists like Nnedi Okorafor and N. K. Jemisin, or those of foundational authors like Samuel Delaney and Octavia Butler. The novel’s one acknowledgement of other Afrofuturist writers comes in the idyllic planet NALO-4. “Nalo” is an African name, meaning “loveable”; it’s also the given name Science Fiction Grand Master Nalo Hopkinson, whose books are much more character-driven, and much more complex in terms of their engagement with mythology.

Infinitum does little to imagine a Black future, or to explore the range of Black experience. Instead, it centres and deifies a particular kind of warrior culture. It’s unsurprising when John ultimately achieves a kind of godhood, since commanding power is so fundamental to his character, but he’s not a creative god. He’s a source of power that exerts control and demands stasis. He is, finally, able to achieve a post-racial existence, but it’s not one that stands as any kind of utopia. That world mostly signifies exhaustion, with racism fought to a standstill at the price of complex humanity. It’s far from an illegitimate vision, but it’s a deeply pessimistic one, and likely to frustrate readers seeking paths to the future.