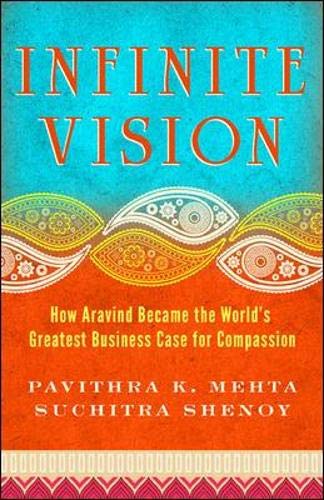 “It’s hard to see how any reader interested in best business practices would not be inspired in some way by Infinite Vision: How Aravind Became the World’s Greatest Business Case for Compassion.”

It’s a bit difficult to classify a book like Infinite Vision: How Aravind Became the World’s Greatest Business Case for Compassion. On the one hand, it’s essentially the prototypical foreign business case study; on the other hand, it’s a compelling read with well-drawn characters—a surprising page-turner for a business book.

The book is devoted to Aravind, a nonprofit organization in India that deals with the lofty hope of curing the world of blindness—a highwater mark for a goal. But after reading Infinite Vision and understanding more about its driving force, Dr. Venkataswamy—a name that is thankfully shortened to “Dr. V’ throughout the book—one gets the feeling that Dr. V and his team may have the world’s best chance to accomplish this.

Starting with the relatively straightforward immediate aim of performing large-scale surgery for cataracts—a disease that accounts for 48% of the blindness throughout the world, but 60% in India—Aravind defied conventional business logic to become the largest provider of eye care in India. Actually, that’s being modest; Aravind is the largest in the world. And it became so with some mind-boggling stats.

For example, consider that “[t]he National Health Service for the United Kingdom does a little over half a million eye surgeries annually; Aravind does 300,000.” But that’s not the impressive part. The impressive part is that Aravind does this—about 50% of the ophthalmic surgical volume of the U.K.—at less than 1% of UK’s costs. That’s 13.8 million GBP versus 1.6 billion GBP. Even accounting for differences in economies, the gulf between the two is still staggering.

Equally impressive is the ability of authors Shenoy and Mehtaa to take what might otherwise be dry statistics and imbue them into the narrative of Infinite Vision. Consider that in 35 years, Aravind has treated more than 32 million patients with more than 4 million surgeries, the majority of which are either highly subsidized or completely free. This is in a country where the majority of the population survives on less than $2 per day. Yet Aravind still manages to be, for the most part, self-reliant and innovative. So much so that even a former President of India was once a patient. And it did all this with a business model that while surrounded by cutting-edge business practices, holds compassion as its core mission.

One such business practice is Dr. V’s unabashed respect for, of all companies, McDonalds. Aravind holds itself to the fast-food giant’s devotion to “consistency, reliability, clear standards, and low costs.” And just like McDonalds standardizes to provide fast food and fast service, so too does Aravind; in the U.S., “high-volume” means 30 cataract surgeries a day; members of Dr. V’s team regularly performs 100 a day at 3.5 minutes a case.

The impetus behind all of this speed and innovation is the fact that there is so much at stake. If there is one thing that drives Dr. V and his team of 21 ophthalmologists across three generations of his family, it’s that in India, blindness is more than just a tragic twist of fate—for many it is simply a death sentence. A triple loss of “eyesight, livelihood, and a sense of self-worth.”

“There is a cruel phrase in India that refers to a person who is blind as someone who is a ‘mouth with no hand’”—in other words someone that only consumes without contribution.

It is this impetus that drives Dr. V and his team to consistently improve their practices and procedures, in turn compelling the reader to want to understand just how they managed to do it. It’s hard to see how any reader interested in best business practices would not be inspired in some way by Infinite Vision: How Aravind Became the World’s Greatest Business Case for Compassion.