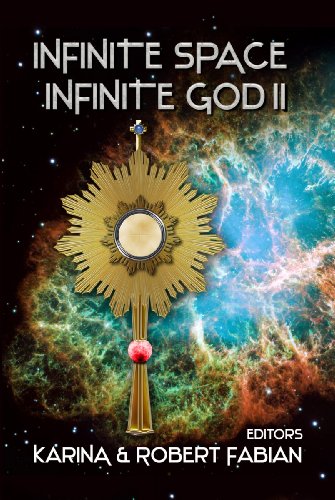 Nuns in outer space? Churches in virtual reality? Priests as robots? Sometimes the most unlikely pairings lead to the most interesting literary achievements.

In Infinite Space, Infinite God II, the creativity of science fiction is merged with the morality of Catholicism. The result is the second collection of 12 short stories edited by the husband and wife team of Rob and Karina Fabian. While fun and imaginative, the anthology forces the reader to confront some serious issues. Would a human clone have a soul? Would aliens be considered a part of God’s creation? Would religious vocations continue to exist beyond Earth’s gravitational pull? These thought-provoking issues are explored in a way that satisfies both the techno-geek and the religious philosopher.

The standout piece, “The Ghosts of Kourion,” by Andrew Seddon is placed in the lead-off spot for good reason. It is a fascinating look at the open-ended possibilities of time travel. After tragically losing his wife and daughter, Professor Robert Cragg leaves the confines of the year 2655 to journey to the ancient Greek city of Kourion circa 365 A.C.E. His goal is to witness firsthand the destruction of the fabled city on the day it was ransacked by a legendary earthquake. Christianity is in its infancy and the pagan gods of Zeus and Apollo are succumbing to the writings of Paul and the rulings of Constantine. Knowing he cannot change the past, Robert nevertheless fosters an urge to save a young girl and her family from the impending disaster. However, the Self-Consistency Principle holds sway. Robert expounds on it by saying, “I can’t travel to the past unless I’ve already been there, and when I get there I’ll do what I’ve already done.”

The moral implications of time travel are staggering. Why doesn’t Robert revisit a time when his wife and daughter are alive? Because he’d merely be observing what had already happened. He’d be watching a rerun of his past life, not living his current one. Why doesn’t he warn the citizens of Kourion before the earthquake? No one would believe him. The alarm had never been raised, so he could not raise it. His powerlessness is acute.

Seddon explores Robert’s emotional conundrum in a telling passage:
“Knowing that I could not avert the disaster should have helped me observe with clearer objectivity and act more naturally. It should have helped prevent mental and emotional damage. It should have helped avert self-condemnation. My job was to observe history, to do what I had done, and not to despair over how events had turned out. How could I have foreseen that this poor, simple girl with the mule would affect me so?”

The collection is filled with mind-bending imagery. A nun battles poisonous snakes during a spaceship rescue mission in Karina Fabian’s “Antivenin:” “Her screams stuck in her throat. Not twelve, but twenty snakes, at least, writhed on the floor and shelves and over the dead man—from his puffed and discolored face, she knew there was no way he could be alive.”

Aliens hunt their prey inside a church during Mass in Alex Lobdell’s “The Battle of Narthex:” “Suddenly a massive black figure emerged from behind a forward column, glided into the sanctuary, and leapt up onto the white marble altar. It stood staring coldly out at the people. It was an unnerving sight to see the ghostly figure standing upon their altar, peering out coldly for its victim while the smiling young priest continued talking just a few feet away. The pygmies had a word for such a wrongness: abomination.”

With human cloning moving ever closer to reality, its moral implications are becoming a pertinent issue. In Derwin Mak’s “Cloned to Kill,” the question raised is: Is a human clone a piece of property or a human being worthy of an immortal soul? The flip-flopping of rhetoric is addressed by clone creator Dennis Rowicki: “The baptism of clones shows the hypocrisy of the Catholic Church. For years, the Church opposed the cloning of humans. For years, you said only God has the right to create human beings through natural procreation. Yet you eagerly baptize the clones created by the process you condemn.” Mak depicts the Church as standing firm on human rights regardless if the person is naturally or synthetically born. As expressed by the clone, Lorraine, “Only inside this church [I am human]. I am non-human outside it.”

The collection hits a slight snag right at the end with the final installment “Dyads” by Ken Pick and Alan Loewen. Nearly three times the length of the other stories, the selection slows the pacing of the anthology, dragging it to the finish line. The plot of this last story revolves around a race of fox-like creatures who practice what the Vatican believes to be an authentic derivation of Christianity. Trouble ensues when a Bible-thumping Earthling desecrates their place of worship in what amounts to act of religious terrorism. Yet there is something off-putting about the native inhabitants that makes it difficult to sympathize with them. They exude an aura of otherness such as in the passage:

“Her ears flattened down, came up; white showed around her cat’s eyes; her mouth worked as her delicate fox face passed from anger to shock to puzzlement. Finally she looked up at him, head cocked and faint squeal in her throat. ‘Yerf?’”

Whether it is their beady eyes, pointed ears, or sharp teeth, it is a bit repulsive to view these animal-like qualities conflated with one of humanity’s oldest religions.

Overall, Infinite Space, Infinite God II expands the role of faith through the endless possibilities of the sci-fi genre.