The Infinite Moment of Us 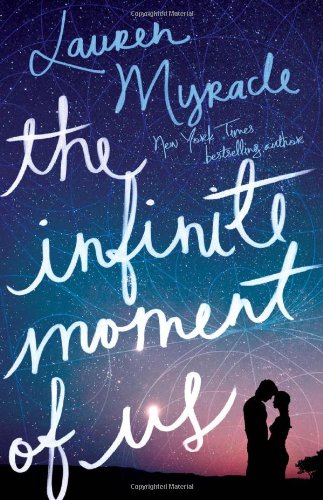 “Sexy yet restrained, The Infinite Moment of Us is a pretty, often introspective tale of first love.”

Lauren Myracle’s latest young adult novel, The Infinite Moment of Us, is a prettier, quieter work than her previous books. Ms. Myracle is famous for pushing boundaries in children’s literature.

Those boundaries can be structural—she wrote a series of bestselling books (ttyl, ttfn and l8r, g8r) told entirely in the form of a long series of text messages—or content driven. Her brave novel Shine took on hate crimes, poverty and the meth culture.

By comparison, The Infinite Moment of Us is much more self contained. In alternating third-person voices, it tells the intertwining stories of a boy and a girl just graduating from high school.

Eighteen-year-old Wren has a perfect academic record. Unfortunately, she also has a near perfect record for doing precisely what her parents expect. And even though the future is bright, Wren realizes at what feels like the last possible moment that she seldom makes her own choices.

Then there’s Charlie, whose life has not been run by doting parents with high expectations. It hasn’t been run by parents, period. And the choices in Charlie’s life aren’t really choices at all. Or, rather, that’s what he tells himself.

When their lives collide, both Wren and Charlie will realize, inside of a single summer, how much they’ve missed by being afraid to step outside the confines of expectation. When they break through their fear, the results are powerfully affecting, if messy and frightening.

Even if The Infinite Moment of Us is quiet for a Lauren Myracle title, its story peals loudly in the hearts of its two main characters. “Is this real?” asks Wren, as she struggles with the question of just how far an ambitious girl should allow her first love to affect her long term plans. “How real is real? How real are we?”

While the classic good girl has existed as an archetype since biblical times, the 2013 version of Wren still feels fresh. Though the Wrens of the world have been quietly taking orders for Millennia, in our brave new world of accelerated premed programs, declining admissions ratios and baby boomlet competition, the character feels uncomfortably timely.

While this new work feels less ripped-from-the-headlines than her others, there are still boundaries pushed in this book. Most notably, The Infinite Moment of Us contributes to the trend in YA fiction to reach beyond the high school graduation ceremony. In the case of Wren and Charlie, an argument can be made that these characters are late bloomers, finding their rebellious teenaged selves a few years after their peers. Their YA story could not have been written when the characters were sixteen. The fictional Wren and Charlie weren’t ready for it yet.

But the better argument is to note that at 18, even after the mortarboard is already hurled into the air, the transition isn’t over. There is still plenty of room in the teen headspace to accommodate the jarring moment of true separation from one’s family. Authors Sarah Dessen, Rainbow Rowell and Gayle Forman have also lately demonstrated that the departure for college is an excellent proving ground for adolescent growth.

Sex is another boundary that Ms. Myracle is willing to explore in her new work. The author has said that she wanted to write about first time sex in The Infinite Moment of Us, and the book does not close the door on its characters’ first sexual experiences. The scenes are honest, on-screen, and unafraid. That said, they’re not written to titillate. Instead, they’re included to explore the far corners of emotional intimacy. The result contains at least as much awkwardness as heat.

Sexy yet restrained, The Infinite Moment of Us is a pretty, often introspective tale of first love.