Infidelity: Why Men and Women Cheat 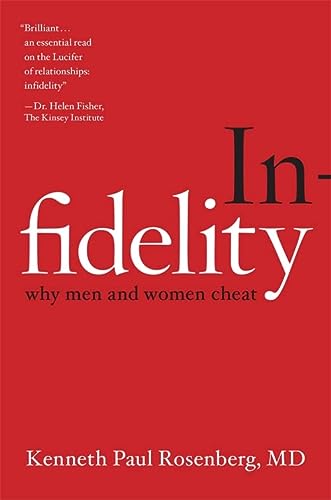 Dr. Rosenberg is a “leading expert in addiction and compulsive sex” and his book, Infidelity : Why Men and Women Cheat, is based on very detailed but carefully disguised case-studies of his patients. Inevitably, his sample is biased toward “the sex and love addicted,” and as “high-risk” behavior is testosterone-related most of the “cheaters” are men, though women with unusual levels of testosterone are also in the mix.

In addition to using data from the therapy sessions with the unfaithful and their wronged spouses Dr. Rosenberg brings to bear a broader perspective from contemporary research in biology, genetics, psychiatry, and so forth to demonstrate “the science behind sexual betrayal, including the fact that our brains are actually wired to be addicted to sex.”

He is at pains to point out that biological and psychological explanations of infidelity—defined as “a breach in the expectation of sexual exclusivity”—do not excuse “bad behavior.” Though he claims that his thesis is not intended as a paean to the joys of heterosexual monogamy, and he does include material from same sex couples, and the polyamorous, it is evident that a stable nuclear family unit is his preferred mode, and his analysis focuses on restoration and maintenance of this mechanism.

So why is not cheating so difficult for so many people if “evolution ensured that humans would stay together long enough to raise viable offspring”? Dr Rosenberg “paraphrases decades of research” on the science of the human brain which has identified the tensions between the “urge to cheat” and “the urge to connect,” equated with the effects of testosterone and dopamine that compel us to seek novelty and thrills (“the new rat in the cage”), and the influence of oxytocin responsible for “the cuddle chemicals” that seek order, stability, familiarity, and connection.

Infidelity is structured to mimic “the arc of an affair . . . the incentive, the indiscretion itself, and the resolution” and is said to be timely in the current   “moment of increased cultural awareness surrounding sexual impropriety.” Perhaps it would be more accurate to say we are actually living in times when “sexual impropriety,” other than as it relates to such phenomena as paedophilia or rape, is increasingly difficult to define, and in many societies the stable two-parent family is rapidly losing its iconic status.

Dr. Rosenberg’s goal is to help prevent infidelity—one’s own or one’s partner’s—from destroying life and relationships, though readers are urged not to treat his book as a medical textbook but to seek individual counselling. He cautions his readers to “try not to get taken in by shallow advice, or one-size fits-all relationship tips” though often his own text has some of that formulaic flavor. He urges on couples shaken by infidelity to show Respect, Acceptance, Forgiveness, combined with more robust advice to “STOP SHITTING ON YOUR PARTNER.”

A couple of unexplored observations might have led to a more nuanced view of “infidelity” and the institution of marriage, namely, that contemporary women are expressing more interest in no strings attached sex and that since the legalization of same-sex marriage same-sex couples are less relaxed  than previously about physical infidelity.

Dr. Rosenberg seems to be an objective, and empathetic therapist, and no doubt very effective for those patients needing his help to get back on the agreed path of righteousness. As he says “sustained romantic love is worth the struggle. It is as close as we get to the divine.” He has marshalled a number of scientific resources to support his analysis but more attention to the social sciences and the changing meaning of commitment in contemporary society, would have produced a more nuanced book or perhaps a companion volume: Fidelity: What Makes Men and Women Not Cheat? Or Why Is Infidelity Still a Thing?