The Inevitable: Understanding the 12 Technological Forces That Will Shape Our Future 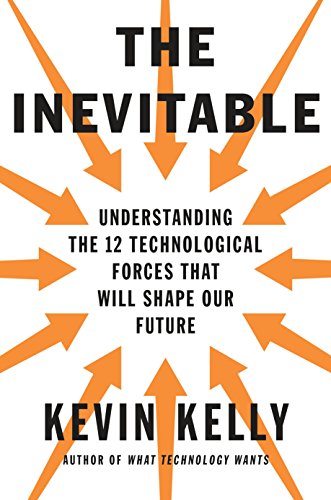 As founding executive editor of Wired magazine, Kevin Kelly has been chronicling technology’s steady—and, on occasion, unsteady—march for almost 25 years. He has made it his business to hold up a periscope and peer over the horizon on behalf of the rest of us. Having done this job for so long and so well for so many years, Kelly should be among the first to resist the urge to announce a singular “official” future. And yet, here he is, offering us a book that boldly calls itself The Inevitable. Kelly is either being supremely clairvoyant or supremely cavalier.

To further seal the deal, the subtitle specifies exactly a dozen forces that will determine the future. Can Kelly, the sultan of Silicon Valley scribes, see the writing the wall in a way that we just cannot? To find out, of course, the reader must succumb to the inevitable and crack open the book.

Kelly’s approach to attaining perfect foresight, like that of other futurists, rests on a framework of “forces.” In a departure from standard operating procedure in the biz, however, Kelly’s takes an innovative approach. His forces aren’t the usual recitation of technologies or global trends, but are drawn from a much more elemental level. The names for the forces seem like they have been plucked from a brochure at a yoga retreat: Becoming, Cognifying, Flowing, . . . you get the picture. (One has to remember, of course, that the man is an alumnus of the Whole Earth Catalog.)

The chapters are organized by the forces: Becoming, Cognifying, Flowing . . . The last chapter is the final force: Beginning. That ought to be enough to intrigue the reader. Once you dive in, the prose just flows.

Kelly is at his techno-enthusiastic best in this book. To the disillusioned youth morose about the state of the world and little but the memories of Bernie Sanders’ last stand to hold on to, Kelly’s message is: “You are not late.” To the reader who may have picked up a copy at a bookshop at Chicago’s O’Hare airport before getting into the unending line for the close encounter with the TSA, the message may be the exact opposite: You are late. But, consider the bright side; this is a spectacularly upbeat book while you wait: “Right now, today, in 2016, is the best time to start up. There has never been a better day in the whole history of the world to invent something.”

Kelly’s future scenarios are equally bright-eyed. In his list of goodies to anticipate, there is “Cognified Laundry—Clothes that tell the washing machines how they want to be washed.” And then, with only a vanishing trace of irony, he adds, “Cognified Knitting—Who Knows? But it will come!” Kelly’s future transcends the inevitable digital dreams; he is open to inter-stellar interference. For him, “AI could just as well stand for ‘alien intelligence.’”

As for how productive our future might be, Kelly implicitly weighs in on the debate that is raging. Those who side with economist Robert Gordon, flag-bearer for the dismal science and author of the recent The Rise and Fall of American Growth, point to a secular productivity decline.

The techno-optimists, led by Erik Brynjolffson and Andrew McAfee, who wrote an earlier book called Race Against the Machine, argue that the true impact of the evolving technologies has not yet been realized and the real productivity boost is yet to come.

Kelly takes the latter spirit of optimism further. “This is not a race against the machines, he contends. “This is a race with the machines.” He celebrates the global connectivity and the liquid nature of the products of a digital society. His example of the barber in Bombay listening to Beethoven all day long may seem far-fetched, but one gets the point. One can hope that humming to endless replays of the Ode to Joy makes the scissors snip faster.

As for Kelly’s writing, it is a bit like smooth jazz. Every other sentence seems designed for instant tweetability. Consider a sampling:

In other words, the book moves quickly. The forces, too, have a rhythm. Only the frequent appearance of lists makes the prose a bit more prosaic. The forces are recognizable. Despite their New Age-y labels, they appeal to common sense because so much of what they embody is happening right now. The only force that seems forced is the last one; it is a tad too cute: Beginning. It is relatively content-free and is a bit of a throwaway force.

There are places where one can pick fights with Kelly. For example, he declares that, “Possession is not as important as it once was. Accessing is more important than ever.” Wouldn’t this mean that some party has to be in possession of assets, content, rights—and as a greater proportion of society relies on access, wouldn’t the owners have the power to drive up the rents? And then wouldn’t that cause the pendulum to shift towards more ownership?

At other junctures, Kelly displays the political schizophrenia of the Valley, making bedfellows of the libertarian and the Marxist. A memorable example is Kelly’s observation that crowdsourced images of the Eiffel Tower taken from different angles could be used to create a 3D model of the popular and excessively photographed Parisian eyesore. He, mysteriously, describes such an exercise of exceeding the promise of “from each according to his ability, to each according to his need.”

The “inevitable” future often devolves into a list; and Kelly has many of them in this book. One is left craving some nuance. If there is anything that the past 30 years of digital technology’s incursion has taught us, it is that the social life of technology is not as “liquid” as Kelly presents. There are many congealed masses, lumps, and grains of sand, particularly when networked humans attempt to absorb and adapt technologies into their illiquid lives.

Nevertheless, Kelly writes so well, one is drawn into the flow. The book is like a gentle bath in the future. It is comforting and refreshing. There is little that will startle and much that will seem familiar—and, yet, one steps out feeling renewed.

Kelly’s book title has taken another well-known futurist, Peter Schwartz’s book, Inevitable Surprises, a step further by boldly dropping the surprise element. “The Inevitable” does not seem as audacious when this is over. Kelly writes so fluidly that one is willing to give him the benefit of the doubt. Readers will likely forgive him if they come away unconvinced about the inevitability of cognitive laundry. After all, the forces—with one exception—leading to it are recognizable and believable.