The Indispensables: The Diverse Soldier-Mariners Who Shaped the Country, Formed the Navy, and Rowed Washington Across the Delaware 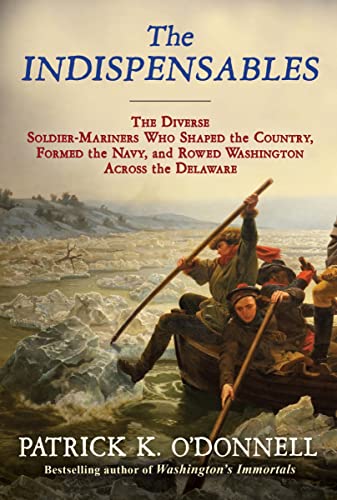 “O’Donnell’s vivid writing reveals the sights, sounds, smells, and feelings of the men who do the actual fighting in wars.”

The United States recently celebrated Independence Day on July 4th. That was the date in 1776 on which the Continental Congress formally declared independence from Great Britain. But it was not until eight years later that independence was won on the battlefield after an improbable military victory over the British Empire. Patrick K. O’Donnell’s The Indispensables is the story of a Marblehead, Massachusetts, regiment’s vital contribution to that victory.

O’Donnell is the author of numerous works of military history, including Dog Company (about the U.S. rangers who took the cliffs of Pointe Du Hoc at Omaha Beach in World War II), We Were One (about the Marines who took Fallujah in the second Gulf War), Give Me Tomorrow (about the Marines’ epic stand at the Chosin Reservoir in the Korean War), and Washington’s Immortals (about the First Maryland regiment’s heroics during the War of Independence).

The Indispensables, like these earlier works, is history at the combat soldier’s level. O’Donnell’s vivid writing reveals the sights, sounds, smells, fears, and feelings of the men who do the actual fighting in wars. Whether it is the freezing cold of the nor’easter that pummeled the troops as they crossed the Delaware River on Christmas Day in 1776, or the “bloody gauntlet” through which British soldiers retreated from Lexington and Concord, or the mud and smoke-filled air at Bunker Hill, war’s hardships and cruelties are front and center in this book.

The drudgery of combat for the Marblehead Regiment was compounded by filth, starvation, disease (smallpox), wounds and amputations, and horrid imprisonment on British ships (which O’Donnell calls “floating concentration camps”). There is no glory in war at the combat soldier’s level, but there is plenty of bravery, courage, and fortitude.

The Marblehead Regiment was formed in 1774, O’Donnell explains, when the “Massachusetts Provincial Congress directed towns in the region to organize companies of minutemen, troops who could be ready at a moment’s notice to defend the safety of their neighbors.”

The Marblehead Regiment consisted of 10 companies that O’Donnell describes as “a diverse conglomeration of unemployed fishermen, dockworkers, tradesmen, and farmers, as well as doctors and lawyers.” It included free African Americans, Hispanics, and Native Americans. It was the most diverse unit in the Continental Army.

And it was Marblehead mariners, O’Donnell notes, that formed the foundation of the American Navy. They engaged in smuggling and privateering, providing the Continental Army with gunpowder and other necessary war supplies. They harassed British warships, ferried soldiers of the Continental Army to safety when retreating from New York (O’Donnell calls this action the “American Dunkirk”), and famously transported General George Washington and his army across the Delaware to attack British and Hessian forces at Trenton.

O’Donnell also credits the Marblehead Regiment with “pioneering a new American way of war.” They used a “defense in depth” to wear down the enemy. They took advantage of the terrain of the battlefields, which they knew better than the British. They used spies and intelligence “to position their units to the best advantage.” They relied on “speed and flexibility,” and avoided fighting when necessary to keep the army intact.

O’Donnell introduces mostly unknown and unsung heroes of the Revolutionary War, including Dr. Joseph Warren, John Glover, James Mugford, John Manley, Caleb Gibbs, and Samuel Tucker. He also highlights the treasonous conduct of Dr. Benjamin Church, a Harvard graduate and British spy within the Massachusetts Provincial Congress. There were plenty of “Benedict Arnolds” in the colonies.

The War of Independence, O’Donnell shows, was both a war against the British and a civil war within the colonies. Loyalists (to Great Britain) made up at least one-third of the colonial population, and some occupied important and influential positions in colonial governments.

During the conflict, Patrick Henry wrote, “These are the times that try men’s souls . . . Tyranny, like Hell, is not easily conquered; yet we have this consolation with us, that the harder the conflict, the more glorious the triumph.” The men of the Marblehead Regiment proved indispensable in conquering tyranny. “Through their sacrifice and extraordinary actions,” O’Donnell concludes, “they fostered and forged a country.”