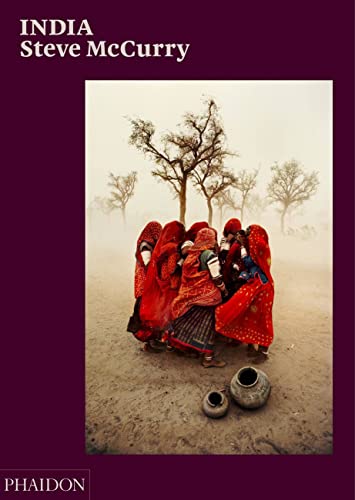 India by Steve McCurry is a book of first impressions that are intense and heartfelt. McCurry, an award-winning photojournalist who has traveled to India many over the past 30 years, sees afresh time after time, always instinctively reacting to his first impressions. He is a master of combining a powerful graphic approach with content that indicts poverty and reveals the ethos of a society.

India is a land of contradictions that “stands third in global technical and scientific capacity—behind America and Japan, but well ahead of China”* yet 15% of its population is undernourished and 70% live in rural communities. It is a country that claims 23 billionaires appearing on Forbes list (in 2006) but has only 75,000 hospitals for its population of 1.25 billion people.

India is also a land of visual contradictions as indicated by McCurry’s image of the formally dressed landowner in his room filled with hunting trophies; or his photograph of the dying naked beggar on a Mumbai train platform, lying in plain sight, but ignored by the passengers just a few feet away; or the well-dressed couple forced to wade the thigh-high flood waters of a city street while the man holds aloft his briefcase, shoes, and umbrella.

McCurry aptly shows a world of paradoxes that as William Dalrymple states in the book’s essay, “it is here, in the places suspended between modernity and tradition, that most of the pictures in this book were made.”

McCurry is obviously fascinated by the people of India and loves the culture. Given the direct and penetrating gaze of his subjects, it is clear that McCurry establishes a genial and instant rapport with his subjects where they look unflinchingly into the lens, without a sense of confrontation.

All of the images are in color and very Kodachrome, which is to say contrasted, highly detailed, with saturated colors that convey the flavor of life in India: colorful, traditional, crowded, with dilapidated buildings and antiquated rusting transportation systems. The book is an experience of sobering reflection with some abrasively haunting images while others are sweet or poetic and dreamlike.

Often McCurry’s extraordinary images show “how the other half lives,” and the harsh divide between rich and poor. The photographs show the intense labor of many Indians in sweatshops, on rickshaws, or hauling and manually carrying immense weights. Other images dazzle with their joy, graphic brilliance, and color, yet it is his empathy for the people of India that becomes his most touching statement.

The images are culled from over 30 years of photographing on the streets and far-flung regions of India such as Mumbai, Jodhpur, Gujarat, Punjab, Kolkata, the Thar Desert, and streets of Rajasthan; from the snowy climes of Kashmir to Uttar Pradesh and Bengal. Although there is a brief notation for each photo in the back section, there are no descriptive captions to speak of, merely an indication of location and year when the photos were taken.

Steve McCurry first made his name in photography when dressed in disguise he made his way across the Afghanistan border during the Soviet invasion of the country in 1979. He emerged with rolls of film sewn into his clothing that brought firsthand reportage of the conflict to the world.

Steve McCurry’s India is a lavish large format book, beautifully printed by Phaidon in hardcover, large (10 7/8 x 15 inches), and handsomely bound. The book avoids the temptation of printing two-page spreads and instead has large full-page images, printed at a gorgeous 9 x 14 inches, that amaze with their remarkable color and detail.