The Inconvenient Indian: A Curious Account of Native People in North America 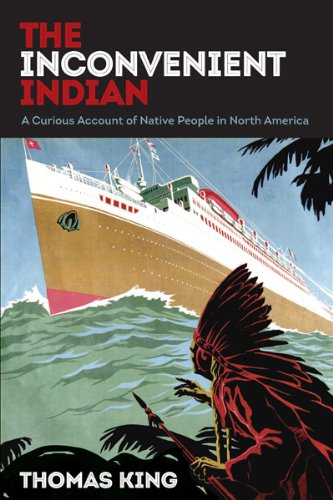 “. . . should be required reading for anyone seeking insider insight . . .”

As a child, acclaimed author Dr. Thomas King and his friends loved to play cowboys and Indians. A family photo shows a tough little hombre in leather vest and chaps, crowned by a cowboy hat. But nobody wanted to play an Indian because they were Indians (Dr. King is Cherokee). And it was better to be an Indian disguised as a cowboy in North America after the native people discovered Columbus!

In The Inconvenient Indian: A Curious Account of Native People in North America, Dr. King conveys what it feels like to be an Indian—an unexpectedly persistent obstacle to White settlers’ exploitation of usurped land, despite centuries of policies devised to exterminate, relocate, educate or assimilate the original occupants.

Dr. King insists that his book is an idiosyncratic “account” of Indian-White relations since contact, not the formal tome of a scholar confined to chronologies of agreed-on “facts” documented in tidy footnotes. He eschews this kind of history as “like herding porcupines with your elbows.”

Instead, Dr. King maintains that “history is not the past. It’s the stories we tell about the past,” and he is a born storyteller. The reader is swept away in a kaleidoscoping spiral of anecdotes, reminiscences, conversations, factual fragments, lists, gossipy snippets, asides and afterthoughts, which frame events gone by and perhaps suggest options for the future.

The outcome is an anti-history, or a subversion of history, which forces us to question “truths,” discard stereotypes, and reexamine policies as Dr. King uncovers the common threads which weave North American natives together despite their diversity.

Dr. King conveys his rage and sorrow about the dominant culture’s rationalizations and distortions of the history of White-Indian relations in forthright fashion. His recounting will be deeply disturbing to some, especially those realizing the extent of their complicity in what amounts to ethnocide. Yet the haunting tales are leavened by his rapier wit, sarcastic jabs, self-deprecating humor, wicked sense of irony, love of wordplay, and ability to include his audience such that there is something to chuckle about in all but the most disturbing material.

The first half of the book deals with historical misrepresentations and racist stereotypes. “North American popular culture is littered with savage, noble and dying Indians, while in real life we have Dead Indians, Live Indians, and Legal Indians.”

Apropos is Dr. King’s own story of swapping roles in an appliance commercial, along with the requisite headband and feather, with a serape- and sombrero-clad Latino actor who was bored with type-casting. Nobody noticed.

Yet Indians did not go gentle into that good night of modernity. James Earle Fraser’s iconic 1915 sculpture “The End of the Trail” portrays a dejected Indian holding a spear slumped over an exhausted horse, having run out of time and space. Dr. King offers an alternate reading wherein the horse has dug in its legs to resist the plunge into oblivion, as both rider and mount catch their breath before riding off refreshed into the future.

Dr. King’s narrative grows darker as he details the wars, massacres, treaties, removals, re-education and other atrocities and abuses that Indians suffered at the hands of the White “civilizers,” whose record of Barbary eclipsed by far that of the “savages” they set out to tame. He has difficulty finding any humor in the legal mistreatment of Indians, and how these various codifications have been justified.

The Western historical record is rife with such rationalizations, along with exaggerations and even outright fabrications, as a good story is preferred over uncomfortable facts. For example, a defiant Custer making a heroic last stand against overwhelming odds at Little Bighorn (1876) is much better stuff for legend than an arrogant officer’s fatal error. Similarly, a righteous, determined Louis Riel spearheading the Canadian Métis’ fight for independence (1885) surpasses his reputation as “a messianic nutcase.”

The last section gets to the meat of “What Indians want,” but after exploring notions of Indian sovereignty Dr. King refocuses the question as “What Whites want.” And that has always been land.

So where do we go from here? It seems pointless for Indians to try to erase the past and start over, unless we really believe that we have moved beyond historical prejudices. And it is meaningless for Whites simply to say “We are sorry,” for the centuries of unfair treaties, residential schools, sexual abuse, church denials, resource appropriations, crippling tutelage and everyday discrimination.

Dr. King finds such apologies disingenuous, particularly as “sorry” does not include acknowledgement of full responsibility and “North America’s paternalist intervention in the lives of Native people continues unrepentant and unabated.”

Nonetheless, Native cultures have proved to be remarkably tenacious and resilient. And recent land claims settlements such as in Alaska and Nunavut plus increasingly effective Indian activism may portend a reinvented future.

Dr. King’s book should be required reading for anyone seeking insider insight into how Indians have been treated in Canada versus the United States. Born in America and now a distinguished Canadian writer-educator, the author is in a prime position for this undertaking.

Though humor makes painful subject matter easier to take, the incessant one-liners can be grating. And some will find the litany of atrocities biased and the long lists boring. But the very recital of names, events, and places can be healing—as visitors to the Vietnam Veterans’ Memorial Wall testify.

Speaking the unspeakable and naming the forgotten makes them real. And that’s a big step forward from the matrix of misrepresentations, miscarriages of justice, and dismissive inconvenience in which the North American Indian has been embedded.