An Inconvenient Apocalypse: Environmental Collapse, Climate Crisis, and the Fate of Humanity 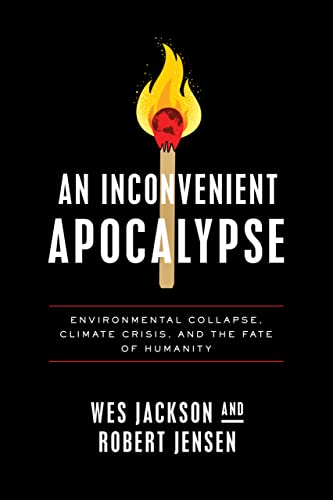 “The book, in sum, is a polemic rather than a serious attempt to sort out the science that informs policy and practice that would be a pathway to a better human future as the planet and all on it hurtle toward the brink.”

An Inconvenient Apocalypse would seem to take its title as a riff off of Al Gore’s groundbreaking 2006 documentary, An Inconvenient Truth, that helped turn popular attention to the deep challenges that climate change presented humanity.

Key orienting ideas include a social-evolutionary model of human development; our species’ human-carbon nature, a strident critique of capitalism, an embracing of a utopian socialist orientation, and a version of the degrowth paradigm.

Each comes across in the book as coarse-grained, reductionistic, and highly idealized. For example, the evolutionary model traces its origins to the advent of agriculture approximately 10,000 years ago. The idea here is that as humans were able to capture and store increasing amounts of energy, populations grow and get hooked on sedentism. As scale increases there is a necessary rise in a hierarchical political-managerial class. Long ago, anthropologist Leslie White characterized this through the formula: environment + energy + technology = social institutions. Jackson and Jensen go on to argue that human nature is, among other things, driven by the need to harness energy-rich carbon. Ultimately this leads to rise of the capitalist state riven with shocking wealth gaps, social injustice, labor exploitation, and the bottomless need for growth driven by unsustainable extraction and use of carbon-based fuels.

Yet they hedge and argue that a well-designed socialist system would use energy in a more socially responsible way: people’s energy over profit energy. They note that for even these well-designed systems, the “temptations of all that dense energy” would likely be irresistible. It’s hard to have it both ways.

In fact, we have two large-scale examples of socialist systems that chased energy irresistibly and in the service of the state and its elites: China and the former Soviet Union.

In contrast, David Graeber and David Wengrow’s recent The Dawn of Everything upends that linear evolutionary paradigm by demonstrating the remarkable diversity of human political-economic organization over the arc of human history. In short, the proposed sequences of the unilinear social evolutionary model do not square with empirical data collected by professional archaeologists, ethnohistorians, and ethnographers. Jackson and Jensen, however, cite the book in a deeply buried endnote, and largely dismiss it.

Jackson and Jensen then turn to the core problem for a sustainable future as they see it: the size of the human population, the scale of human communities, the limits of technology’s scope, and the speed needed to address our global climate challenges. These are all old, well-worn, ideas; nothing new here. They contend that the planet’s carrying capacity is around two billion people (we just surpassed eight billion). And that massive population consumes way too much. They further contend that there needs to be a major realignment of human social organization into smaller, less dense and locally resourced communities. The Western enlightenment paradigm of endless growth also depends on equally expansive tech innovations to solve ever-mounting problems. Finally, they note that there isn’t much time to pull off this tectonic realignment.

The facile reductionism of this argument is highlighted by their statement “The goal of our planning can be stated simply and clearly: fewer and less. Fewer people, less stuff.” Okay.

There are also some stunning tautologies, such as “[T]hen it is a matter of simple logic, an unsustainable system cannot be sustained, at least not indefinitely and not without serious modification.”

Without labeling it so, this is really a full-on degrowth argument that suggests everything needs to reduce in size, scale, and scope. As such, the argument misses much of the subtlety, nuance, and detail of the climate challenges in which we are now immersed.

For example, the four largest carbon producers are China, America, India, and Russia. The rest of the world’s countries are also-rans in this regard. This is to say that the release of carbon into the atmosphere is highly unequal. It is also worth pointing out that those who produce the least are likely to bear the greatest burden of climate change. We could make a similar argument about the vastly unequal concentrations of consumption. Indeed, scholars who are deeply engaged with degrowth arguments often dislike the label because of its reductionist quality. They would note, for example, that you want to shrink some things (the burning of carbon-based fuels is at the top of the list) and grow other things (alternative forms of cleaner energy: solar, wind, geothermal, and hydraulic that can be stored in high-tech batteries). Climate change activist Bill McKibbon has even advocated for the measured use of nuclear energy.

A good starting place to dig into both the science and policy of degrowth-stasis-growth arguments is McKibbon’s recent Falter (2019) for a highly accessible and nuanced view of climate challenges. For an academic deep dive, the work by Timothée Parrique is a great place to start.

As the book begins its slow descent to its conclusion, the concept of the “apocalypse” is interrogated. Rather than framing it as a total collapse, it is treated as a form of inalterable transformation. The authors then move through what this altered, low-energy, post-carbon world might look like. They then address the mindset that might accompany this new world, one that they intimately anchor to a Christian theology and its notions of grace and love. Yet, in their view, God is a “human projection of a life-giving capacity of the ecosphere . . .” Since God, in their view, is a cultural construction, then only we can work to save ourselves.

The overall sentiment of the book is laudatory. We are in the midst of a major environmental catastrophe for which we are little prepared, but for which action is desperately needed. It seeks to engage this problem with a deep concern for social justice, equality, and reverence for us and the planet that we have so deeply scarred. However, the book’s conceptual framework that trades on old ideas is doomed to fall short in charting our way into a vastly different and altered world.

The book, in sum, is a polemic rather than a serious attempt to sort out the science that informs policy and practice that would be a pathway to a better human future as the planet and all on it hurtle toward the brink. The book is equally silent about a serious consideration of systems of governance that are needed to achieve those ends. After all, geopolitics as it plays out through nation-states is driven by competition far more than cooperation. We are saddled with institutions that are designed to fail when faced with global disasters that demand collaboration and consensus.