An Incipient Mutiny: The Story of the U.S. Army Signal Corps Pilot Revolt 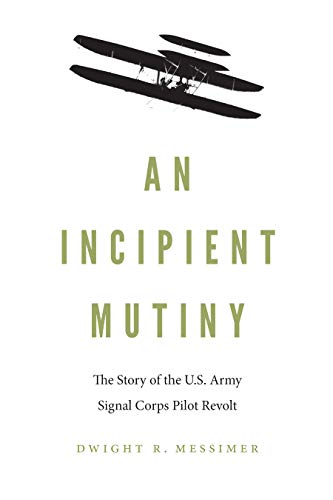 "An Incipient Mutiny fills in an unexplored but critical part of American military history."

Many book titles exaggerate the importance of the subject or at least offer more than the book delivers. This work does the opposite. In Incipient Mutiny, Dwight Messimer tells the forgotten, stormy, and important history of "army aviation on the ground floor" as a part of its beginnings in the Signal Corps. It is not about mutiny as much as evolution and revolution.

"It all started in 1892 when the Signal Corps bought a balloon." Because "the Signal Corps was not a line formation, and combat was not its primary role," balloons but not airplanes could find a home there. When the weather bureau left the Signal Corps in 1890, the Corps without approval or an appropriation took on the new task of gathering military information.

The Signal Corps pushed the value of aviation with little encouragement. Benjamin D. Foulois wrote a thesis in 1907 on the future of flight in 1907, and "he lived to see some of his predictions come true." The following year, he conducted the trials for "the army's first dirigible and first airplane."

The Corps succeeded, however, in part because of the growth and despite the growing pains of civilian aviation. At that time, flying was offered as a correspondence course. The Curtis and Wright companies each offered different flight systems. Military pilots received pay from the two respective companies to serve in air events. Many pilots died.

The turning point came in 1911 "the year in which army aviation actually got its start." In January, Eugene Ely landed on and took off from the battleship USS Pennsylvania. By then, the Signal Corps had "demonstrations that included aerial photography, airborne radio transmission, scouting, and a live bomb drop." That year, the first airmail also took place.

Problems with "personal advancement and turf protection" came with disagreement about the future of aviation. Progress came despite problems with funding, organization, pilots, planes, and the argument for a separate aviation service, on such a personal level that the important decision on flight pay involved a congressman and a poker game. A debate a raged on the moral and practical need for arming aircraft.

Most of the book leads up to the mutiny of 1915 against Captain Arthur S. Cowan and policies that gave command and position in the Signal Corps' aviation to men with little or no experience as pilots, the use of dangerous Wright planes, and other issues. The Army succeeded in covering up the scandals.

The mutiny led to the court martial of Lewis E. Goodier and from that the media made Army aviation a national issue as Americans debated entering World War I. It brought on the rise of the later famous Billy Mitchell in Army aviation and many needed reforms.

The scandal did not bring on the eventual separation of aviation from the Signal Corps, however. That came from American needs in the First World War and huge scandals, "real or imagined," from the failed wartime expansion of airplane manufacture.  Famed sculpture Gutzon Borglum railed against what he saw as massive fraud. As with military aviation, "the problem stemmed not so much from incompetence as it did from experience." "Bad decisions and outright blunders were frequent."

An Incipient Mutiny fills in a relatively unexplored but critical part of American military history. The author seems to know his subject too well, however. Messimer sometimes refers to events yet explained that the reader would not know. He does not hesitate to bluntly state opinions such as "where it belonged" (referring to a rudder) and "short-sighted mismanagement" although supported by the facts.

Part of the entertaining quality of this writing comes from the author's humanizing the colorful characters while keeping the technical details at a minimum. An Incipient Mutiny offers the reader candid histories of forgotten figures such as Adolphus Washington Greely, Paul Beck, Charles DeForest Chandler, and many others.

Messimer's informal style makes a highly readable, fast read on a subject that with some other writers would be dull. An Incipient Mutiny is annotated, illustrated, and has a bibliography.