The Incendiaries: A Novel 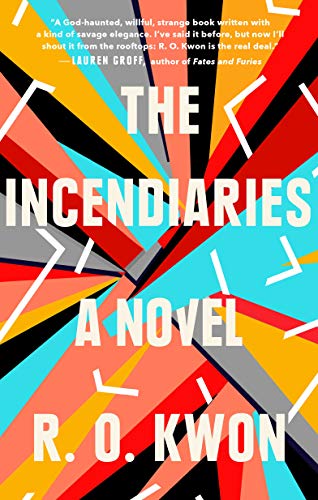 “The Incendiaries marks the genesis of a dazzling career and showcases a writer who pushes herself courageously into the dark.”

With the near-certain confirmation of Brett Kavanaugh to the Supreme Court this fall, the fate of abortion rights hangs by a proverbial thread. Our literary writers have not shied away from the agonizing debate, as evidenced by Joyce Carol Oates’s sprawling A Book of American Martyrs, published last year. Along with race, abortion is the serrated knife that carves a jagged line through our country, Christian fundamentalists on one side, the rest of us on the other.

In The Incendiaries, a luminous and propulsive if uneven debut, R. O Kwon adds a fresh twist by illuminating anti-choice Christianity from the inside. Set mostly at Edwards, a prestigious college in upstate New York, the novel shifts between three characters: Will Kendall, raised working-class and a transfer from a Bible college; Phoebe Haejin Lin, daughter of divorced Korean immigrants; and John Leal, older, whose earlier efforts in smuggling desperate people out of North Korea had resulted in a gulag sentence.

As the novel opens, Leal has emerged back at Edwards, where he is slowly building Jejah, a ministry—or cult—devoted to militant theocracy. A social outsider, Will meets Phoebe at a party and falls hard; she’s a glamorous femme fatale surrounded by privileged, self-absorbed peers who suck down gimlets and skip classes. Will has rejected his own faith and is eager to explore more secular (and sexual) connections. After a string of hook-ups Phoebe is ready for a relationship, and she’s drawn to Will’s naiveté and fervent devotion.

Will, a dead ringer for Tartt’s Richard Papen, guides us into the maze of Phoebe’s past and Leal’s growing hold on her, stemming from dealings with Phoebe’s father, now an evangelical pastor in Los Angeles. Will recognizes Leal as a scam artist dressed up in Christian garb: “I’d still listen to still more versions of John Leal’s gulag tale, his shifting harlequin cast. The penitent assassin. The ex-trapezist, who escaped. The spy, the kingpin. He invented a hanged child to fill out this troupe plucked from a fortune-teller’s pack of obvious lies.”

The Incendiaries’ first half then, chronicles Will’s suspicions, the rollercoaster of his relationship with Phoebe, a classmate’s horrific death—Scott Spencer’s Endless Love sprinkled with a pixie dust of bathos.

Then something happens. The novel’s second act swerves sharply, as Phoebe pulls away from Will and seeks solace in Jejah. Kwon knows this milieu well. For those of us rooted in evangelical Christianity, she gets so much of it right: the unwavering belief that abortion is “baby killing,” the conviction that the secular world teems with devils in disguise.

Under Leal’s tutelage Phoebe is born again: “Each morning, she went to the college pool, looping back and forth in fast, obsessive laps . . . a new Phoebe, fresh-hewn, more powerful than the original. In direct light, her head looked as if she’d tinted it sea-witch green. It brought to mind the bronze statues on the central lawn, stone-eyed heroes oxidized to verdigris.”

Kown’s language is often intoxicating, but in her drive to layer on poetic sentences she occasionally overreaches, as in this moment between the star-crossed lovers: “Despite the heat, I held Phoebe’s hand. I kept it in mine while we leaped the ancient stones, raising exuberant brumes of dust.”

Her pacing in the final stretch feels rushed, wrapping up loose plot threads, as if she’s unsure about the narrative choices she’s made. Leal remains a stock charismatic leader, a cardboard cut-out in the mode of David Koresh and Charles Manson; and as with Koresh and Manson, his holy mission devolves into senseless violence.

But these are minor quibbles. There’s a fine line between religious ecstasy and auto-da-fé, as Kwon suggests. What starts as a kind of love triangle concludes as a searing meditation on the loss of faith and love, the shadows religion casts over damaged lives, and a scathing indictment of extremist elements in Christianity today. The Incendiaries marks the genesis of a dazzling career and showcases a writer who pushes herself courageously into the dark.