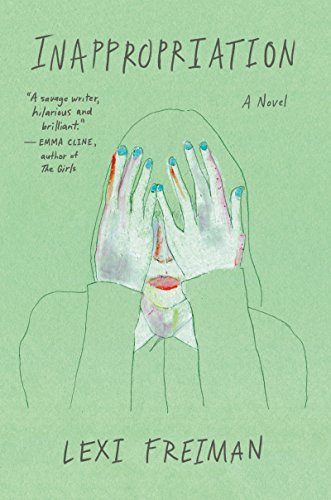 “Freiman is nothing if not an ambitious writer, unafraid to make vicious fun of those who take themselves far too seriously. Inappropriation is truly an impressive debut.”

Author Lexi Freiman is from Oz. Australia, that is. So she’s an Aussie, pronounced Ozzie. Irreverant, in your face. That’s part of the national culture there Down Under. And no mistake about it, her debut novel, Inappropriation, just screams irreverence.

The main character, Ziggy Klein, is a fifteen-year-old Jewish girl who has just transferred to Kandara, a private girl’s school in a wealthy Sydney suburb. Ziggy is having serious identity issues. Her hormones have not yet kicked in. No period, no boobs. She is an androgynous figure surrounded by contemporaries who are developing bumps and curves and who are obsessing about sex and boys. Most notorious are the “Cates,” three rich girls whose ambitions are focused on preparing for the grade 10 formal at the end of the school year (which, this being Australia, is in December).

So Ziggy feels completely left out and has begun questioning her sexual identity. Is she a boy or a girl, gay or straight? Something else entirely? She runs inner debates with her derogatory side, whom she calls the “Hitler Youth.”

Ziggy’s father has started hanging out with athletic men. Has he turned gay? Ziggy’s mother, Ruth, is a psychotherapist with a past as the disciple of a Shunyata, a female guru who “traumatizes people out of their trauma” and says things like “Coca-Cola would have told Hitler to be himself. A bad artist, a genocidal maniac. Coca-Cola is a Hitler machine.” Ruth’s practice is helping women regain their sense of self. Her techniques involve a lot of jumping around, yelling, and role-playing. The jargon of female self-awareness fills their house. None of which helps Ziggy one bit.

Ziggy is an outsider at Kandara, but she makes a couple of new friends: Tessa, who has a prosthetic arm, and Lex, who is from India. Both also outsiders to the rich, white, unblemished world of Kandara. They introduce her to “A Cyborg Manifesto,” an actual 1984 essay by Donna Haraway, an American scholar, which rejects traditional gender identity politics by advocating breaking down of traditional dualistic barriers between human and animals, between humans and machines, and even between the physical and non-physical.

As Ziggy later puts it: “Haraway dissolves borders by creating metaphorical affinities.” Ziggy laps it up, and after much internal struggle with all the identity and non-identity jargon she is pummeled with, decides she is “transhuman,” i.e., non-gender and maybe post-gender. A teenage cyborg. She starts walking around with a GoPro camera attached to her head filming her classmates. She later converts to GoPro glasses. Meanwhile the grade 10 formal approaches, and Ziggy has to decide whether to go, with whom, and, most crucially, as girl, boy, or something else.

Inappropriation is at times unbelievably funny. Freiman pokes fun at just about every aspect of private-school life, self-help gurus, teenage angst, and, of course, gender-identity politics. This book has been labeled satire, and there are any number of sweetly vicious moments where this or that social convention or presumption is skewered without mercy.

At a certain point, it becomes clear that Freiman is also engaged in a very clever parody of Haraway’s ideas. Scholars have criticized Haraway for a variety of faults, including creating confusing neologisms, using circular arguments to the extent that she ends up contradicting herself, and failing to understand or to use the scientific method. But Freiman takes this to another level and has a great deal of fun doing it.

Ziggy’s interactions with friends and family, her texts, Ziggy’s online postings on various chat websites are filled with so much of Haraway’s terminology that they rapidly become self-parodying. And of course that’s the point. For example, here is part of a conversation between Ziggy and her Hungarian-born grandmother (who speaks English unevenly) when they are out shopping for a dress for the formal

“No, the gender binary is fascist!”

On this level the book is highly entertaining. And one doesn’t really need to follow the arguments closely—her clear point is that they circular and thus pointless.

But at times this playing with jargon gets the better of Freiman. She delivers exhausting lists of gender-politics terminology, often spouted in quasi-debates among 15 year olds. Oral discussions and texts are crammed with words and phrases such as transgender, cisgender, heteroromantic homosexual, balancing the polarity, patriarchal sadist, transphobic, and gendernormativity.

She also runs into a problem early on with her narrative descriptions of what is going on in Ziggy’s head, Ziggy’s debates with herself about her sexuality. These might have been intended to be extended internal monologues, but they come across as commentary by an overly academic outside narrator—a caustic scholar, not a nervous teenager grasping for the right word to describe herself. This creates, not intimacy with or empathy for the character, but distance from her.

By the end of the book, Freiman, though, is using dialogue better to get her points across, and the characters become more engaging.

Freiman is nothing if not an ambitious writer, unafraid to make vicious fun of those who take themselves far too seriously. Inappropriation is truly an impressive debut.