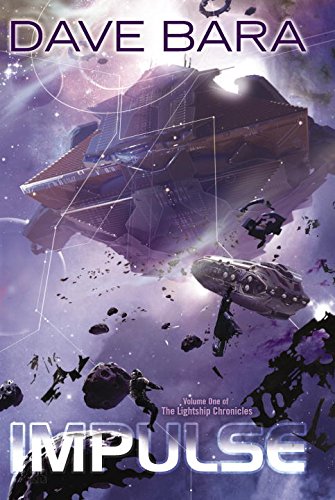 Impulse is the first in a new military scifi series from Dave Bara, following the adventures of Lt. Peter Cochrane as he oversteps his bounds and eventually saves the day.

Cochrane is the son of the new ruler of his planet, Quantar, one of two human colonies recontacted by Earth a century and a half after a civil war collapsed the previous empire into isolated planetary concerns again. As one of the first acts of the new Union, a new class of ship—the Lightship—is sent out to recontact other worlds and bring them, too, into the new organization of planets. Almost immediately, however, the first ship, the Impulse, is damaged by unknown means and then kidnapped by their own contact from Earth, and Cochrane, on the second, Starbound, and a number of other arrangements, seems to be the only one willing and able to get it back.

The setup is interesting, potentially rich, and has a lot of promise, but the execution of the novel as a whole was less successful. The plot is a straight line of noticeable points that the characters are obliged to mold to, so that previously reasonable characters keep acting utterly unreasonable and characters that should face retribution for ridiculous breaches barely get a slap on the wrist.

Cochrane is brash in a way that feels forced, never losing any game he plays against anyone so that he comes across as unrealistic and everyone's belief in him feels unfounded. His emotional entanglements are so murky that they make all of his relationships suspect.

There is heavy emphasis on the structure of command, but little to no respect for the chain of command established, and the one female officer throughout the book is alternately unpleasantly shrill and pushed aside so the men can do their work, regardless of the fact that she outranks most of them.

The framework of the story owes a lot to Star Trek with a little Star Wars, but seems to miss almost all the subtlety and nuance. It focuses instead on long scenes of various officers talking at each other and not ever coming to any sort of conclusion that doesn't involve someone plowing over what reason there is, and doing exactly the wrong thing so that Cochrane can do the opposite and save everyone. It becomes hard to believe that these are the best the Union has to offer, if one entitled prince who has never been on a space mission can manage to get everything right even when he's the cause of what's wrong, especially when his supposed superiors can't even manage to listen to each other.

What the book does do well, however, are the space battles and the locations. The ships, when in action, are exciting and interesting, and the battles themselves are full of that sense of neat that readers look for in science fiction. The ships “look” very nice, despite their wild impracticality, and the one alien planet they manage to land on seems to be gorgeous. Too bad it's rather stereotypically non-white, and features heavy-handed attempts to not be as macho as, say, the Barsoom stories, and winds up confirming the unhappy place of women on that world.

Another bright spot is the introduction of the Founders far into the story. The Founder technology they encounter is very gee-whiz in contrast to their own technology, which seems outdated and slow. There is a disconnect between how we're told these are the top-of-the-line ships and what we actually see—which is that scans take hours to complete, heavy weapons run on atomics, and only the new hyper-dimensional engine is advanced. Perhaps in future installments, this can be dealt with as they search out new lost technology and contact other lost civilizations.

All in all, the book wasn't bad, but it seemed outdated in technology and equality, juvenile in characterization, and perhaps rushed in plotting—the frameworks are there, and could be wonderful, but it could have benefited from more fleshing out and polishing.

If you are a fan of military scifi that is heavy on the military look but not on military function, and if you are a reader who prefers action and setting over character, this might be the book for you. If, however, you prefer characterization, Impulse will leave you wishing it had been more fully fleshed out.