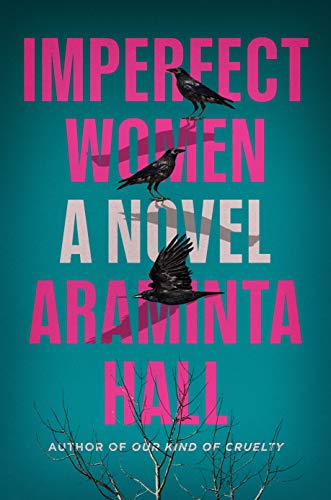 “At times surprising and other times disturbing, Imperfect Women is a suspenseful mystery with depth, a frightful look at domesticity gone awry, intricately written with layers of female frailty and ferocity that are impossible to turn away from.”

A beautiful woman in her late forties, with a loving husband and daughter, is found murdered in a park late at night. Is it a mugging gone wrong or something more personally sinister? In Araminta Hall’s Imperfect Women she gradually confronts what happened leading up to Nancy Hennessy’s violent death by unmasking this woman’s complicated history with her two best friends, her longtime husband, and a lover whose identity she revealed to no one.

The narrative is sectioned off in three points of view: Eleanor, a practical single woman who runs an organization for overseas relief; Nancy herself; and then Mary, a wife and mother who gave up her career and is, in effect, burnt out on life in general. At first it seems odd that the three of them could ever be such close friends when they are so drastically different and yet Hall reveals that in college when they first met they shared extraordinary dreams of becoming successful in their respective careers and this, in part, draws them together.

The story begins with Eleanor’s point of view, and she definitely feels ambivalence and even a little guilt about how she left Nancy the night she died. They’d gone out to dinner, Eleanor having known about the affair though not the true name of the man, is frustrated with Nancy for not having ended the affair. Nancy has been trying to get out of the relationship, but her lover won’t let her go. As for Eleanor’s feelings about her friend, “Eleanor had watched Nancy constantly create little dramas in her life, culminating now in this big one, and she couldn’t help wondering if it was to add interest to a life that wasn’t nearly as full as it could’ve been.”

Eleanor is not perfect either, hence the title of the book. A woman who has never sustained a long-term relationship, she becomes so consumed by a new relationship with a man that she thinks of little else and neglects to check on her downstairs elderly neighbor, breaking the promise she made to the woman’s daughter, then lying about it.

Nancy’s point of view begins in the throes of breaking free from the relationship with the man whose identity is finally revealed, although some readers may suspect who it may be early on. Why does she choose to cheat on her husband and threaten their domestic life of relative stability? “Women in this world are still expected to conform, even though it doesn’t seem like that anymore.  You can be many things in this life, but a dissatisfied woman is not one of them.”

Hall pushes the thought-provoking theme throughout the narrative of women’s freedoms being compromised in even the most successful of marriages. She also points a searing light on women and their friendships, and the gut-punching betrayal juxtaposed with unyielding loyalty that often comes with one female knowing too much about another.

Who killed Nancy remains in the background, an underlying seductive pull that by the time Mary’s section occurs the reader is anxious to learn the reason why the perpetrator committed such a brutal act. For her part, Mary, a woman of color, naively gave up her aspirations for a career in academia in order to marry her former professor and bear his children. “She looked for the first time at the brownness of her skin next to the whiteness of his, and something about his assumptions smarted inside her.”

Hall sets the characters at odds with one another in such a way that nearly every character in the story has a legitimate reason for harming Nancy and yet she is beloved by many of them. In Imperfect Women Araminta Hall uncovers the realistic and dangerous flaws of her three female protagonists by showing the reader why they chose the man who shares their bed. At times surprising and other times disturbing, Imperfect Women is a suspenseful mystery with depth, a frightful look at domesticity gone awry, intricately written with layers of female frailty and ferocity that are impossible to turn away from.