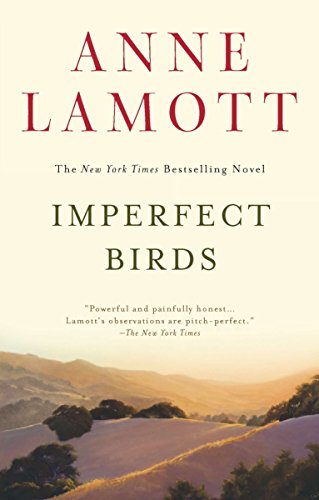 “Out beyond ideas of wrongdoing and rightdoing
there is a field. I’ll meet you there.”
— Rumi

Anne Lamott is intriguing. She writes like Anne Tyler with a professor’s seriousness about life but a child’s smile. Life scares Lamott but she keeps the bogeymen away by writing about people who are like her, except that maybe they have a just a bit more courage. Or maybe they don’t.

Imperfect Birds is a novel about a family, about mother Elizabeth Ferguson, her second husband James and daughter Rosie, a senior in high school in Marin County. Elizabeth and James worship Elizabeth while they simultaneously count the days until she’ll leave for college so that they can stop worrying about her. “. . . life with most teenagers was like having a low-grade bladder infection. It hurt but you had to tough it out.”

Rosie’s been a straight-A student until, as a 17-year-old senior, she begins getting Bs in even her best courses. That would not be much of a disappointment for other students, but there’s a reason why she’s coming undone. She’s using drugs, of virtually every variety, to the point where even her extremely forgiving mother can no longer ignore what’s happening. “. . . (Elizabeth) had a conviction now that when she thought something was going on, it was.” This also means that a mother’s worst fears are coming true, “I was afraid of how doomed you would be as a parent. . . .”

The title, of course, refers to imperfect people—people who have lost the ability to fly straight. Elizabeth is too forgiving of her daughter’s faults for far too long. James is too judgmental and too quick to prescribe a harsh remedy for his stepdaughter’s problems. Rosie, who lost her father to cancer years before, is young and wants to enjoy life until. . . . Until she finds that her drug abuse has left her with a heart “like a little dead animal. . . .”

Rosie also wants to be loved by someone other than her mother and stepfather, which is why she creates fantasies about one of her male instructors and eventually becomes involved with someone older. Eventually a decision must be made: Will Rosie’s parents save her from herself or will they step aside and let her destroy herself before her life even really begins?

In the hands of a less-talented writer, the reader might take a guess as to what the ending will be and put the book down prematurely. But Lamott is one of the best writers we have—about this there should be little doubt. So this story feels like a gift—one to be savored and treasured—and will be appreciated by any reader who does not make a claim to perfection in his or her own life.