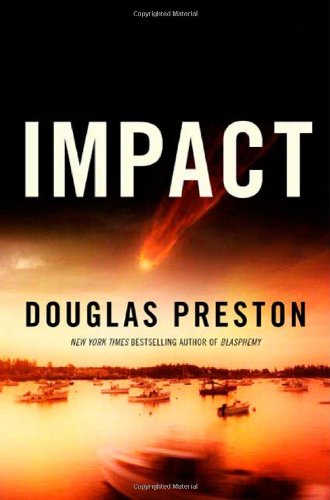 One of the best things about not reading anything about a book until after you read the story in it is that you get to come to a story completely blind, totally unspoiled. Unfortunately, the flip side of that is you aren’t warned when books aren’t as great as they sound on their cover blurbs.

Impact has a great idea once it’s boiled down: Something streaks across the sky in Maine and the search for it uncovers all sorts of unexpected things: slavery, dirty bombs, terrorism, cover-ups, alien civilizations—and a host of unknown dangers to the planet as a whole. In execution, however, the story isn’t so exciting, getting bogged down in itself and its flat, boring characters, of which there are many—too many—all of them basically interchangeable as far as voice and characterization go. As a result, when something really interesting finally happens, it tends to get buried under those problems. Crazy things happen around them, and people don’t even notice, or notice only so much as one sentence worth? Real people would be slightly more distracted by, say, the moon exploding.

It’s obviously meant to be an adventure-thriller take on a scifi story, which is fine, but Impact comes out almost like a spoof of both action-adventure-intrigue books and classic scifi tropes, falling victim to the failings of both. No one seems to care enough about what’s going on to make the reader care, and that makes it a tough read, not because it’s written in any complicated manner—quite the opposite, in fact, probably due to Preston’s history as a journalist, tending to strip writing down more than it needs to be—but because when the reader doesn’t care, the reader doesn’t care to keep reading. Douglas Preston is repeatedly compared to Michael Crichton, and the comparison is fair as this writing holds the same broad-stoke characterizations and obsession with make and model, superseding the depth and subtlety we might expect from a better book. These failings damaged Crichton’s reputation as a writer—not that this prevented him from being read and enjoyed by millions. . . .

If you are the sort of reader who likes short sentences, wooden characters with not much inner life, action and adventure that mostly involve standing around and worrying until at least the half-way point of the book, and several storylines that could each have been the purpose of the book but don’t play nice together, then this is the book for you. If, however, you want more from a book with such a potentially great concept, chances are, like me, you’ll be frustrated.

The end of the book is satisfying enough, but it comes as sort of too much, too late: everything happens in the last few chapters when it could easily have gotten moving beforehand; and the real satisfaction of the book is taken down a notch by the epilogue. In addition, the entire book seems unaware of how to handle a scifi trope like incipient alien contact, but instead fumbles with the concept and continually pushes it back, foregrounding self-involved inner monologues that don’t tell us much about how the characters really feel or how they think, only what they think of themselves. On behalf of science fiction, it feels like a mostly-failed attempt to steal an idea and reshape it as something it isn’t; the concept never settles in and functions, always seeming out of place and forced.

The only real saving grace is the character of Abbey, who has more personality and more interaction with the world than any of the others. If only the book had been more about her and less about other people doing things to her. Maybe the next thriller will feature her alone.