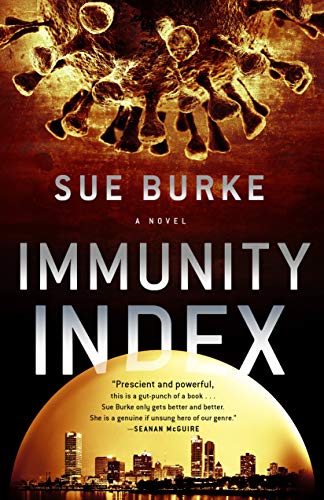 Immunity Index takes place in a future that is uncannily similar to 2020. A pandemic spreads across the world, killing thousands and breeding political dissention. The President of the United States blames China, though there is no evidence it was China’s fault. Economic disparity drives protests, rioting, and a growing sense of disenfranchisement.

But the novel’s future world also includes human cloning, self-driving cars, and woolly mammoths brought back from extinction. The juxtaposition of future technology with present-day politics is jarring, leaving the reader with the sense that the future setting exists primarily as an excuse to comment on current events.

The story separately follows four characters who do not cross paths until near the end of the novel. The first three—Avril, Berenike, and Irene—are identical clones who have never met. Avril is a college student who wants to overthrow the government; Berenike works at an autocar rideshare company; and Irene cares for Nimkii, a woolly mammoth, at a low-budget zoo. The fourth is Peng, the geneticist who originally cloned the three women and who has been forced to work for the government to create a pandemic for political gain.

The president and his followers are shallow, stupid, and evil. They want to quash political dissent at any cost, even to the point of recklessly introducing viruses to universities and population centers that oppose them. Everyone who supports the president does so blindly and selfishly, an utterly one-sided political landscape with no nuance or balance. The four main characters are each subjected to some aspect of the government’s hostility: infected by viruses, attacked by drones, or thrown into secret prisons to be starved or murdered outright. Each resists in their own way until the regime eventually collapses through its own stupidity.

Burke’s earlier books Semiosis and Interference were masterful, capitalizing on the author’s knowledge of plant life to create a fascinating ecosystem and alien life. Perhaps unsurprisingly given her strengths, the best part of this book is the woolly mammoth, whose fragile hold on life in a modern world is both charming and bittersweet. “For all his huge magnificence, Nimkii looked desolate, pitiful, even out of place, although ten thousand years ago his kind had dominated North America’s grasslands.” Without the originality of science and biology found in her other novels, however, the humans of this story fail to spark much interest.