Imagine Us, The Swarm 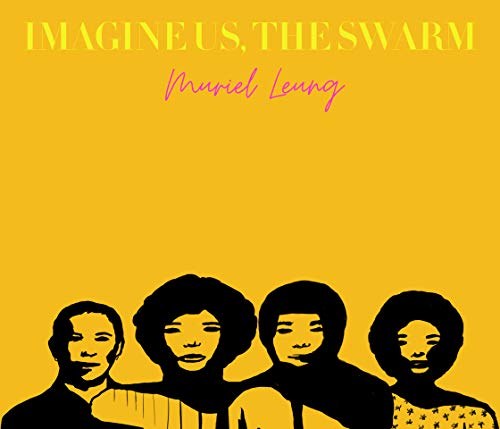 “In Imagine Us, The Swarm, Muriel Leung takes risks experimenting with non-traditional literary resources to show us the challenges faced by an immigrant family and alienation felt in the swarm. . . . brings attention to the emotional baggage we carry in our journey, and delights the readers with exquisite poetic language.”

Imagine Us, The Swarm by Muriel Leung is a hybrid collection of poetry and essays revisiting the ghosts of an immigrant family from Hong Kong. Much like immigrants do in their lives, the poet experiments with non-traditional resources to reach deep into grief and alienation in this fascinating book.

It is evident from the start that the poet is well informed in poetics, and that the text requires an active and educated reader. Leung uses non-linguistic clues to make the reader part of the collective experience of creating meaning, to bring us into the swarm.

That image, the swarm, speaks of the colony but also of the sound of “steadfast and synchronous” labor and the alienation—“all is empty when one is plural”—that signals to the constant grinding of workers. The author’s family is then a reflection of the collective immigrant experience of laboring to create a life from scratch in a foreign land without instructions.

Another unifying image is that of the ghost, which also offers a solution for Leung’s task as a poet. She refers to Avery Gordon’s Ghostly Matters to let the reader know that she will explore the ghosts of her immigrant family inhabiting this tale of bees. Thus, Leung establishes a connection between “horror, history, and haunting” to illustrate how social issues control individual life.

Beyond the extended metaphors, Imagine Us, The Swarm presents a buffet of formats to convey meaning. The book opens with two lines of ellipses inviting the reader to hear the silences in the open spaces. These visual silences could be interpreted as one of the main roadblocks in the immigrant journey: language barriers. “I am not even legible to myself. Cannot not even English my way out.”

A letter from the speaker’s father, who is portrayed as a hardened man, seems to point at communicative issues. The readers see only a few sentences sprinkled on a mostly open page of dotted lines. “You have to work hard,” and the reassuring statement, “Your dad loves you.”

As readers, we eavesdrop on the conversation between father and daughter, a story of survival loaded with myths and contradictions. Thus, we become participants in the creation of meaning, and the message comes into focus: revisit the myth of the hard working, successful immigrant family. Capital letters scream this irony from the page: “YOU CAN MAKE IT IF YOU TRY.”

The voice threading through the seven texts of the collection reflects on this internalized myth with phrases like “maybe I am making this up,” “another myth: my father swimming from mainland China to then British occupied Hong Kong,” “you have to work hard,” and much later, “some nights, I am thinking of the colony of my father and me and what the bees know to be true.” At the same time, the ellipses command the readers to see what is not present on the page, the truth behind the myth, while the reality of this immigrant family deconstructs it.

This is a family with a multigenerational hurt. The striking language brings out those ghosts to convey the mental health issues associated with the constant grinding expected of all immigrants. Phrases such as “Pancreatic humor,” “we begin this circuit of love and tumorous ache,” and “drink one another’s pain” all direct the attention to the hurts buried several generations deep. The texts go from the pain of a teenage girl learning about her father’s cancer on her prom night to the pain of the father as a child working to provide for his sister.

At other times, the punctuation seems to represent space and time for grief after death. “Grief pours through me like a sieve. Its aftermath of sand and salt debris grows heavy at the banks. I kiss that too.”

We feel the depression on the page. “The world was on fire, but I was only ready for the most immediate disaster, which was the realization that I could not swim and was sinking with painful slowness.”

Leung plays with other non-linguistic resources. Two texts coexist on the same page to tell two simultaneous stories. On the main page we learn about the collective Asian immigrant:

“Then, they would call me, and it would be another

Asian woman’s name.4 Waiting there, I would turn doe

until correction, and always, the apology bears

a light touch of resentment. The plural of me

and yet they cannot tell me apart.

Says Trinh T. Minh-ha, “All is empty when one is plural.

Yet how difficult it is to keep our mirrors clean.”

In the footnote, another story calls from the margins, where the readers learn about the cancer eating away at the speaker’s father.

At times, the speaker also muses about her writing as both witness and participant of this story. “It’s funny that the book is not about the bees at all,” and “How do you write a history that is both [yours] and [not yours] but an extension of an improbable future?” In this line, the poet opens the door for an interpretation. The poet, daughter of an immigrant, becomes the subject and witness of her father’s story of labor, through her own pains and resentments, filling the holes in memories with sadness. Then she apologizes to the reader, in a reference to Arati Warrier’s poem “Alive,” as a form of promise that she will make something out of the devastation.

The poet plays with different genres. Poetry becomes poetic essays informed by theory. In that sense, Leung comes across as a well-informed writer who can play with traditional forms in unexpected ways. Her ingenuity shines in a text based on a psychological thriller film. There is movement in migrations, and there are ghosts and traumas dragged in the movement. Both are explored in depth in this conversation between two different artists, the filmaker and the poet.
In Imagine Us, The Swarm, Muriel Leung takes risks experimenting with non-traditional literary resources to show us the challenges faced by an immigrant family and alienation felt in the swarm. By doing so she deconstructs the myth of the successful immigrant, brings attention to the emotional baggage we carry in our journey, and delights the readers with exquisite poetic language.