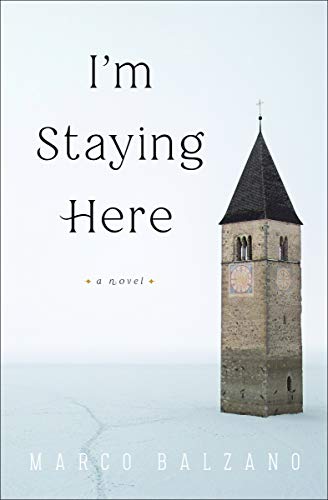 I’m Staying Here is a simple title surrounding a profoundly moving story about ordinary people trying to live their lives as farmers, as they have for centuries. It’s 1923. Their village is Curon, an Italian/Austrian border town nestled in a valley as the forces of racism, hatred, and war swirl across Europe. Locally, Brown Shirts with guns patrol the streets and Mussolini’s edict forbids the speaking of German. Curon, originally in Austria, has recently been annexed by Italy.

The voice of this novel is Trina, a woman looking back on her life, still deeply grieving her long-lost daughter. She speaks in a tone soaked in both loss and resignation as well as a wisdom gained through suffering and the inevitability of life. Her words are written directly to her missing daughter, whose ghost fills the pages with another personality. We’ve opened the book, so we’ll pretend this narrative is meant for us as we piece together Trina’s life story. Over the shoulder of her loss, we see villagers struggling with the restrictions of Mussolini’s regime.

Trina determines to teach German anyway, but must do so in secret. She teaches here and there—a clandestine network of schools in the valley—and escapes discovery and capture. Her close friend, Barbara, who becomes a teacher at Trina’s urging does not, and her abrupt absence on the day Trina marries Erich, haunts Trina the rest of her life.

As a local backdrop to the changes taking place in Europe, there is the threat that a dam recently planned for the area will submerge the villages in the valley with water. The townsfolk of Curon and other towns to be affected by this dam alternate between a desire to fight against this threatened destruction and believing favorable rumors—effectively wishing it would go away. Farmers busy with everyday chores to maintain their rural lives talk of resistance to the dam but are distracted with the pressing necessities of their lives. Time passes, and the political environment with its growing menace of war seem to postpone any real plans to implement the building of the dam. Awareness of it fades.

When Germany announces the “Great Option” in 1939, and communities in South Tyrol are invited to join the Reich and leave Italy, the town begins to fracture, as some decide to leave. Those who choose to stay, like Trina and her family, are seen as traitors and spies by an increasing German presence; added to this complication is their son, Michael, whose teenage rebellions send him toward the fascist cause. One day Trina comes home and finds that her daughter is missing. And then, Erich is conscripted to fight. When he returns from the war, denouncing it and determined never to fight again, he is changed.

As the war closes in around them, Trina and Erich must flee the village into the mountains just to survive. On the run in the middle of winter, they encounter other farmers like themselves trying to live their lives in spite of the brutal realities of winter, suspicion, famine, and fear. Somehow, they find their way back and the war is over. Miraculously, their home is still standing; some of their animals still alive in other barns.

And then, activity of building the dam begins again with renewed power and determination.

The novel is simply but brilliantly told in Trina’s words to her daughter and the many characters she describes in her shorthand resemble us, as everyman: "the man in the hat" the "fat woman," "the old man." Balzano’s observations through this character are so familiar and spot on, as to be poetry.

Here’s an excruciating truth told by "the man in the hat" who came to represent the forces behind the building of the dam: “He knew people well; he’d traveled the world his whole life. They were the same everywhere, anxious for peace. Content not to see. That’s how it had been when he’d cleared other villages, emptied neighborhoods, demolished houses to put down railway tracks and motorways, thrown cement over fields, built factories along riverbanks. And his work never ran into trouble because it flourished wherever there was blind faith in destiny, absolute trust in God, the heedlessness of men who wanted only peace.”

I’m Staying Here puts a microscope on the history of a generation before us in one small corner of Europe, whose instincts are similar to our own: the desire for peace, the unwillingness to see what we don’t want to see until it can no longer be denied—and those of us who are lucky enough to be alive when there is a moment to contemplate it all. Ultimately I’m Staying Here begs the question after all, what is the meaning of a life?