I'm Not Dying with You Tonight 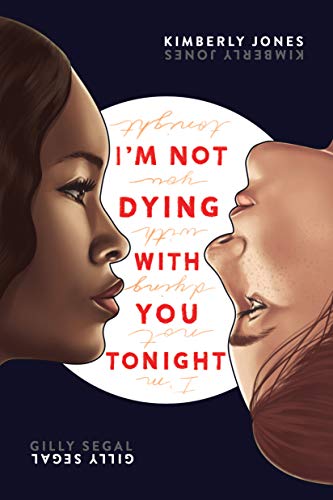 “‘If you had a nice boy, there would never be a need to lie.’

“‘Go on, little liar on the prairie.’

“I don’t care what Pops says as long as he don’t say I can’t go to the game. Imma try to hook up with Black later. I think tonight can end better than we just left it in the car.”

“‘It’s good you’re doing this, Campbell,’ Dad says, as the bus empties and a long line of beefy football guys in tracksuits lumber out.

“Is it? I stay in my seat, remain buckled. I wonder why he thinks it matters if I work the concession stand for one game at this school. I’ll only be here a year—my senior year. Where does he think this one night is going to lead?”

Two girls. One night. One fight gone bad, accelerating across the stadium, across the street, across the town. Lena, beautiful, stylin’, popular, black. Campbell, new girl, frightened, lonely, white. When they get trapped inside the concession stand after a riot breaks out between students from opposing schools, the girls are thrown together. Partners, just trying to escape, to find a ride home, away from the violence.

“Campbell gets to her feet, and we take off again. Sweat rolls down the line in the center of my back, and my hair is flying like a superhero cape. The noise of the fight begins to fade behind us, so I can hear both of our tired breaths and our feet slapping the pavement. My charm bracelets jingle on my wrist. Ah, these shoes makin’ it hard to run. The straps are rubbing my toes into blisters, and my feet are starting to swell. These delicious gladiator sandals were not designed for this apocalypse. Ewww. I hate this night.”

It’s an awful night, and Lena and Campbell have to make their way across town, through terrifying streets, riots, and peaceful protests gone bad. Campbell doesn’t understand how she ended up there, so far from the New England town where she lived only weeks ago, before her mother left the country and shuttled her to this unfamiliar, unfriendly place. Lena has lived there forever, has family all around, but there are parts of the city even she won’t go. Until tonight.

Will they find their way safely? Will their separate pasts help or hinder in their quest to survive? Can any kind of relationship be forged with two such different people?

I’m not Dying with You Tonight is filled with tensions of our day. Racism, misunderstanding, corrupt police officers, people who can’t—or don’t want to—get along. Through these two girls the reader is taken on a journey of discovery and surprise. This book is tough, educational, and a race through not just the city streets, but the fast-paced story. Each chapter keeps the pages turning until a satisfying, but unpredictable, ending. Highly recommended.