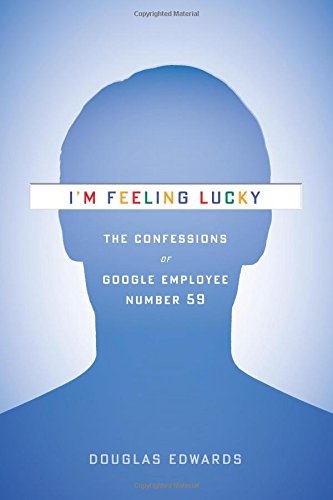 “Mr. Edwards, who came to Google as a marketing executive and became the ostensible ‘voice’ of Google through his branding work, has written a memoir that is sometimes readable, sometimes excruciating.”

Is Google the strangest company on earth?

From usurping copyright law by scanning every book in the world, to its wacky teenage corporate mantra “Don’t be evil,” there’s definitely something amiss.

Its founders, Sergey Brin and Larry Page, believe they’re special people—“data driven” in their own parlance—and that Google was designed to change the world. To help the revolution, they hire the earth’s smartest people to do anything and everything under the sun.

If that doesn’t give you the heebie-jeebies, how about this? Google proclaims itself a technology company because it has many computers and engineers to help people search for information on the web. But it makes its money through advertising—despite the fact its founders profess to hate the activity. This is one of the first philosophical inconsistencies we learn in Doug Edwards’ I’m Feeling Lucky: The Confessions of Google Employee Number 59, the latest in an increasingly long line of Google books.

Carrying this definition of technology to its logical conclusion, we could call NBC a technology company. It too has engineers, cameras, and microphones to send images and sound to people through television sets. It also has a business model based on advertising.

So Brin and Page, who detest marketing and advertising, have built their company so solidly on those very activities that it would warm the heart of Albert Lasky, the founder of modern advertising. One wonders, are they simply clueless or supremely cynical? It’s difficult to tell: Instead of the smooth rap of “Mad Men”’s Don Draper, in I’m Feeling Lucky we get the ADD-like pronouncements of two Stanford computer jocks who believe they’re at the top of the world, Ma, with the firepower of software code to protect them.

Mr. Edwards, who came to Google as a marketing executive and became the ostensible “voice” of Google through his branding work, has written a memoir that is sometimes readable, sometimes excruciating.

For example, his souped-up recounting of the internal jousts and near disasters associated with the creation of Google’s AdWords and AdSense programs may be interesting to ex-Googlers (or “Xooglers” as they’re known, one of many annoying endearments the company heaps on itself), but for civilians it’s no more compelling than any other project-management anecdote. What new corporate initiative doesn’t have obstacles, near-derailments, and hallway Simon Legrees ready to harm little Nell?

And for all its self-regard as a different breed of corporation, Google is hardly immune to the office politics any old-line behemoth is prone to. Author Edwards’ nemesis is Marissa Mayer, then Google’s product director and now vice president, who pops up repeatedly in I’m Feeling Lucky to big-foot his attempts at writing simple, friendly English. Mr. Edwards makes it clear that by also being Larry Page’s main squeeze, Mayer could run roughshod over any and all projects regardless of who led them.

If anything, Mr. Edwards seems torn about his former employer; Lucky is part hagiography, part Upton Sinclair exposé. Despite the free meals and massages, the company is renowned for—the 18- to 20-hour workdays for months on end, the 3 A.M. emails, and the denial of any life beyond Google—seem designed to suck every corpuscle from its employees’ bodies, much like a high-tech Jonestown.

Yes, the prose is clever and seems candid, yet there is something thoroughly depressing about the number of times Mr. Edwards’ ideas, efforts, and words get trumped by other—particularly by the everpresent Ms. Mayer. Indeed, he may have been billed as Google’s “voice” in its early years, but Mr. Edwards makes it plain he was considered plankton by the engineering and product management cadres.

Salvation comes when Google’s IPO hits the market in 2005. For Mr. Edwards (and the reader) it can’t come soon enough. It makes him rich, allows him to quit, and returns him to a family who must have wondered who the vaguely familiar visitor to their home was.

Still, like a battered spouse who can’t quite press charges, Mr. Edwards tells us that Google, because of its founders’ brilliance, hubris, and eccentricity, is something special—an enterprise several magnitudes beyond a normal for-profit company.

But it isn’t. It just believes much of its own PR.

Google has already missed the bus on social media (Facebook, Twitter) and retail promotion (Groupon, Foursquare). Selective leaks from the Googleplex about research into driverless cars, energy alternatives, and other “big ideas” occasionally occur, but little else. The company finds itself in the innovator’s dilemma: hemmed in by its own initial success.

The day will come when someone has a better idea for web searches than the “page ranking” ingredient that is the base of Google’s secret sauce. When that happens, we will see Google struggle in the same way every dominant organization does in confronting its weaknesses. It may survive. It might collapse. That’s why “Don’t be evil” seems simplistic and mostly irrelevant in the corporate ecosystem.

A better credo would be: “Always mortal, never infallible.”