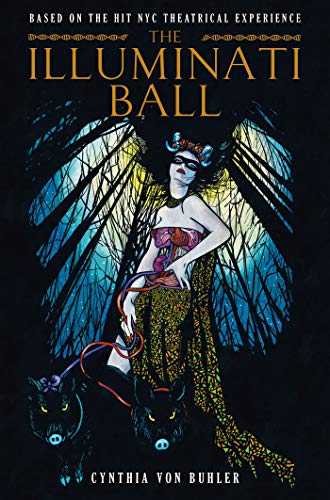 “The Illuminati Ball has a magnificent concept . . .”

The graphic novel of The Illuminati Ball is less a story in itself than an attempt to convert an immersive theatrical experience to the page. The generic leap isn’t always sure-footed. What’s dynamic and engaging in performance doesn’t always transfer to the page, and a story that flows seamlessly around the audience may stagger and reveal its gaps when the viewer has the advantage of distance.

The book begins with an invitation: “The Baroness and Baron de Rothschild cordially invite you to The Illuminati Ball. You have been chosen for initiation into the Illuminati on August 24, 2016 at 6 pm. Please fill out the included application. We have enclosed fifty thousand dollars for your trouble. We will send a car to fetch you. You will be required to wear a blindfold en route. Join us, and discover the light of scientific truth.”

While it initially seems that the reader is in the position of invited guest, instead five other characters “fill out” their applications. Their professions are markedly generic: finance, “celebrity chef,” lawyer, scientist, musician. They arrive at a lush estate, greeted by masked figures. The male ones are clothed, but the female ones, including one heavily pregnant woman, are nude except for their masks. There’s a strong sense that this could be provocative as part of a performance, but on the page it’s sexually reductive, captured in the invitees’ concern, “Is this a sex party?”

Within the “ball,” which much more closely resembles a dinner party, three groups interact: silk-aerialist performers who fade away after the opening sequences, guests, and a host-group with marked physical differences: Pig King, Kamahednu, Parthenope, Vacanti, and Chumanzee. All of these characters have intense animal characteristics (conveyed by their names), and they are soon revealed to be human-animal hybrids masquerading as American royalty.

The story involves unethical scientific research, vegan/animal rights politics, and a satirical take on American cultural fears of the Illuminati. This group, clearly, is not the Illuminati; rather, they have taken on the narrative of a 1972 Surrealist event hosted by the real de Rothschilds in France, in partnership with Salvador Dalí. Neither are they concerned so much with the “light of scientific truth” as with ending animal bio-research through emotionally loaded scenarios.

Photos at the back of The Illuminati Ball reveal the exquisite costuming and design that underlie the theatrical production. Unfortunately, the graphic novel’s art style doesn’t convey either the performance’s delicacy of live creation or its startling juxtapositions of the real and the unreal. The graphic novel operates entirely in a hybrid mode between the two, wherein it’s often unclear whether the grotesquerie is intentional or accidental.

There are genuinely lovely moments in the book. The full-page image overlaying the Hindu goddess Kamahednu and Jesus has iconic power. Likewise, the hosts’ encounter with the Georgia Guidestones (monuments intended to allow humanity to rebuild after a catastrophic social failure) is deeply haunting.

Finally, though, the book lacks unity in purpose, narrative, and aesthetic. The story doesn’t flow logically, and on the page, there’s nowhere to hide that flaw. The Illuminati Ball has a magnificent concept, but it emerges only as a shadow of some larger, more coherent work.