iGen: Why Today’s Super-Connected Kids Are Growing Up Less Rebellious, More Tolerant, Less Happy—and Completely Unprepared for Adulthood—and What That Means for the Rest of Us 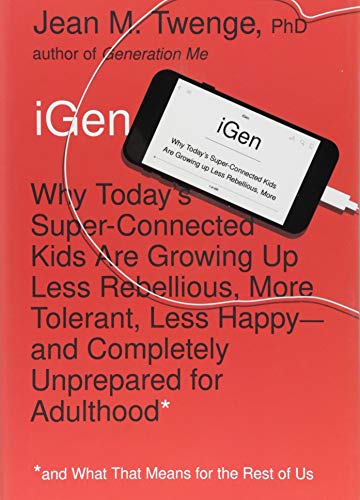 “an important barometer of youth mental health and reminder of the insidious ways that technology can swiftly reshape society right under our noses.”

Once upon a time, not so very long ago, a computer required a whole building to house it at an exclusive research facility. Nowadays, all you need is a smartphone to make calls, check the news or weather, book travel, watch videos, shop, get travel directions, post photos, text your friends, and keep up with what’s trending on social media. Twenty-four seven, you’re never alone, you’re never disconnected—as long as you can recharge your device.

But this may come at a price far greater than the dollar cost of a phone and data plan—the mental health of the rising generation of children, teens, and young adults in the Internet age. (Yesterday in the park I saw a baby in a stroller confidently swiping away at a device with one hand while teething on a stuffed rabbit!)

This is the focus of American social psychologist and leading generational researcher Professor Jean M. Twenge in her new book iGen: Why Today’s Super-Connected Kids Are Growing Up Less Rebellious, More Tolerant, Less Happy—and Completely Unprepared for Adulthood—and What That Means for the Rest of Us, a sequel to her 2006 mainstream bestseller Generation Me.

Twenge coined the label iGen for young people born in the mid-1990s to the mid-2000s and later, who are vastly different from their millennial predecessors and from any other generation before. Most significantly, iGen is the first generation to spend their entire adolescence in the smartphone era. With social media, videogames, and texting replacing other activities, iGen spends less time with their friends in person—perhaps why they are experiencing unprecedented levels of anxiety, depression, and loneliness in tandem with a sharp decline in happiness and life satisfaction.

While not directly claiming a cause-and-effect relationship between smartphones and declining mental and social health, Twenge uncovers a pervasive pattern of correlations and associations between daily screen time and iGen self-identified malaise.

Twenge bases her findings on three reputable national surveys of high school and college students, and one of adults forming a data base drawn from more than 11 million respondents since the 1960s. In 2011–2012 she started seeing significant large and abrupt shifts in teens’ behavior and emotional states. This was the year when the majority of Americans started to own cell phones that could access the Internet.

The most radical impact of the smartphone on American lifestyles in terms of changes in attitudes and behavior has been on adolescents in their most formative years in terms of brain, emotional, and relationship development. “They grew up with cell phones, had an Instagram account before they started high school, and do not remember a time before the Internet . . . The average teen checks her phone more than eighty times a day.”

Highly indicative of the extent to which smartphones have become an essential lifesupport for today’s youth are the responses Tenge obtained from her undergraduate students when she asked: “What do you do with your phone while you sleep? Why?”

“Their answers were a profile in obsession. Nearly all slept with their phones, putting them under their pillows, on the mattress, or at the very least within arm’s reach of the bed. They checked social media websites and watched videos right before they went to bed, and reached for their phones again as soon as they woke up in the morning (they had to—all of them used it as their alarm). . . . They talked about their phones the way an addict would talk about crack.”

Twenge cites a recent story by the Washington Post profiling Katherine, a young Virginia teen and what she did on her iPhone during the 12-minute drive home from school. Her thumb moves restlessly as she scrolls from Instagram to Buzzfeed, back to Instagram, then opens Spotify, followed by Fitbit. Next she checks her Snapchat and watches a sparkly rainbow fly from her friend’s mouth. She is checking out a tutorial on nail art when the bump on the driveway tells her she’s home.

Social media sites go in and out of fashion fast with iGen. Facebook is regarded as an older person’s platform eclipsed for teens by more immediately interactive picture-friendly sites such as Instagram and Snapchat and group video chat apps allowing “live chilling.” Snapchat seems to be particularly popular as validation of one’s popularity with points awarded for every snap sent or received. It is also seen as a safe way to talk to friends as all pictures and messages disappear after 24 hours so there is no potentially embarrassing permanent record.

Although some electronic interactions may only take a minute or two, the total time teens spend online, texting, and gaming in a day adds up to a formidable chunk of their waking moments. High school seniors spend an average of six hours a day with new media, of which a third is on the Internet, a little more is spent texting on their cell phones, and the remainder is devoted to electronic gaming and video chat. And that’s just during their leisure time!

Combing painstakingly through her nationally representative databases, Twenge identifies 10 important trends shaping iGeners and the culture of us all in years to come.

“In no hurry (the extension of childhood into adolescence), Internet (how much time they are really spending on their phones—and what that has replaced), In person no more (the decline in in-person social interaction), Insecure (the sharp rise in mental health issues), Irreligious (the decline in religion), Insulated but not intrinsic (the interest in safety and the decline in civic involvement), Income insecurity (new attitudes toward work), Indefinite (new attitudes toward sex, relationships and children), Inclusive (acceptance, equality, and free speech debates), and Independent (their political views).”

Perhaps most striking of these trends, other than the visual of youths with an ubiquitous electronic appendage, is the prolongation of childhood, increasingly refraining from sex and alcohol, delaying getting their driver’s licenses, living at home longer, and being less likely to work. Concomitant with an increasing preoccupation with physical, personal, and emotional safety, this means a generation more comfortable alone in their rooms with their smartphones than in public interactions where there is a risk of being challenged outside of their comfort cocoons.

Individually, these trends may not seem so alarming, but together they suggest a climate of escalating social atomization and alienation confirmed by extensive interviews Twenge conducted with iGen members to flesh out her number crunching. The correlation between smartphone use and depression is striking.

The relentless optimism and self-confidence expressed online by youths making goofy faces on their Snapchat selfies and Instagram party pictures can mask a profound vulnerability in real life. As one of Twenge’s informants puts it: “People post pretty Instagram posts, like ‘My life is so great.’ Their lives are crap! They’re teenagers.” Obsession with Snapchat scores, numbers of Twitter followers, and Facebook post ‘likes’ reflect fears of being left out, of not being popular enough to be invited somewhere, so that life can become a treadmill of torment without constant social media self-validation.”

So what can be done to help these hurting teens? Twenge does not offer any quick fixes, just a plea for moderation and mild boundary setting—for both teens and adults. She urges parents to delay getting kids smartphones as long as possible. A clamshell without Internet is fine for an elementary student to call Mom after school. Install programs that restrict phone Internet access to under two hours a day. Tell your kids to put down their phone. “Even Steve Jobs limited his kids’ use of the devices he brought into the world.” Don’t think that your children are safer in their rooms on their phones than at the mall with their friends, or they may grow more comfortable with selecting an emoticon than with in-person interaction.

This book is a must-read for parents, teachers, employers, and anybody trying to make sense of iGen behavior and what this bodes for the future. Twenge writes in straightforward conversational style, and the statistical data is presented in easy-to-follow graphs illustrating change over time though the format quickly gets boring. Most telling are the direct quotes from her informants as Twenge is a highly skilled and empathetic interviewer who elicits honest and often haunting responses.

However, the work is not without flaws. The pop-psych theme seems rather too slickly tailored to the mainstream market through over-generalizations. Despite disclaimers, the book still smacks somewhat of youth-bashing—the common reaction of previous generations to “What’s the matter with kids today!” Methodologically, the causal correlations suggested often seem to be observed associations wherein intervening variables have been downplayed in order to cherry-pick the data for maximum shock value rather than teasing out subtleties.

Nonetheless, this book is an important barometer of youth mental health and reminder of the insidious ways that technology can swiftly reshape society right under our noses.