If You Leave Me: A Novel 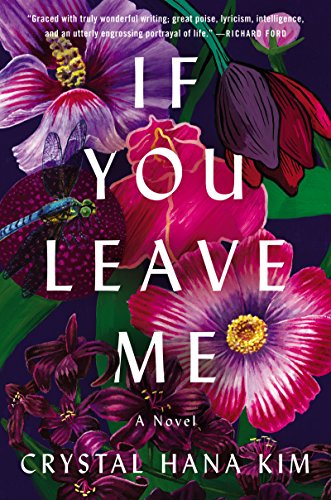 Crystal Hannah Kim’s celebrated debut novel can either be read as a tragic love story, in the tradition of Romeo and Juliet, or as a feminist parable of a woman victimized by the Korean war, or even, perhaps, as a symbolic embodiment of Korea itself in the form of a rustic nature goddess broken in two by a pair of male cousins engaged in a violent struggle for her affection.

Jisoo, the “manly” enlisted soldier, and better-off cousin, is favored by Haemi’s mother for bringing food to the family when he comes courting. Kyunghwan, on the other hand, is academically smarter and handsomer, but, being from the poor side of Jisoo’s family, and a draft-avoider, to boot, lacks the resources and “manliness” of his rival. As romances go, however, it is of course Kyunghwan, the handsome narcissist, who captures Haemi’s heart.

Hovering over the domestic drama is the perpetual shadow of the war: armies from the North, the South, the United States—posing an ever-present danger to women, who are frequently raped and murdered by soldiers from every side of the conflict.

While centered on Haemi, the narration skips among the three protagonists in this love triangle, providing three different versions of the backstory. To Kyunghwan, his rival, the “Seoul-born” city boy, Jisoo, is filled with contempt for the rural life he and Haemi share. For his part, Jisoo readily admits to his overriding desire to return to the city. And, unlike his caddish, cowardly cousin, is, at this stage of the novel, at least, presented as generous, strong, and courageous.

What the two rival cousins do share, however, is the shame Koreans endured under the Japanese, and all the ensuing foreign invasions . . . “How we were perpetually hungry, how we weren’t even allowed to speak our own tongue. We had no power in this fight, either. We were pawns, tossed around by Japan, then the Soviets and the United States.”

Like the cousins, Korea is depicted as a society riven by invaders, but even worse than those coming from the outside are the interfamilial hatreds that keep the two Koreas in a state of war-readiness to this very day.

Kyunghwan dismisses Jisoo’s courtship of Haemi as “a distraction,” using this as an excuse for abandoning her abruptly, with no explanation, at several points in the story. But Jisoo remains unfalteringly loyal, to both his country and his love, so that by 1952, he is married to Haemi and on his way to fight.

Before his departure, however, he uses his connections to ensure that Haemi and her family are safe by getting the women jobs in the army hospital laundry. But Haemi isn’t contented to be a washerwoman, and she talks her way into helping the nurses at the hospital. In keeping with her symbolic role as “healer,” and refusing to make distinctions between “enemies” or “soldiers” or “innocents,” she soothes the injured and tends to the dying equally.

Even in the hospital, however, women are not safe. They are raped or become prostitutes, or are, unfairly, blamed for affairs with married male staff doctors initiated by the men.

Nonetheless, Haemi and her mother remain safe until Jisoo, who wounded, has lost the use of his right arm, returns home. At this point, the story turns on its head: Jisoo, now becomes the villainous, cruel husband; Haemi, no longer spunky and independent, is his victim; and Kyunghwan, working as a garbage collector in Seoul to pay his way into college, is the hero. Not quite as sure-footed as when she is dealing with the vagaries of village life and youth during the war, Kim now resorts to an extended romantic trope by reversing the roles of the two rivals.  Inevitably, Haemi becomes the victim of both men.

The final words belong to Kyunghwan, now an entrepreneur doing business with Japan, as he contemplates the fate of an “orphaned,” newly industrialized and Americanized Korea that sheds its past and strides into its giddy materialist future.

Perle Besserman is a staff reviewer at New York Journal of Books.