If Wishes Were Horses: A Novel 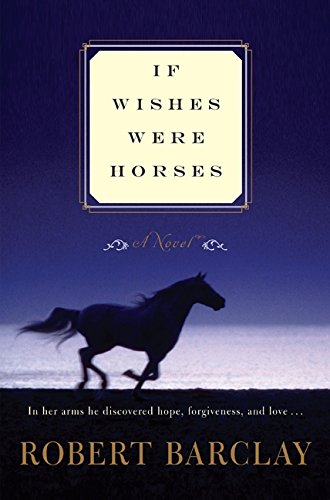 If Wishes Were Horses could start a lively debate in a book club about what constitutes a romance. The commercial romance category is often maligned for being formulaic and stilted, whereas literary fiction is expected to be richer and deeper.

This book is a mix of both, in a package that appears serious yet trumpets romantic clichés. “In her arms,” the cover announces, “he discovered hope, forgiveness, and love.” The jacket blurb calls it a “novel of love, hope, and second chances;” while a press releases touts it as “the story of healing, redemption, and life re-found.” The author, meanwhile, is quoted as saying it’s “about the power of self-forgiveness and learning to love again after horrific loss; obstacles that any of us might be forced to face one day.”

Then there’s the cover art: an atmosphere-laden horse image suggesting equine characters and/or a horsey setting.

The novel delivers it all—sort of. From page one it reads like a category romance with a happily-ever-after ending, dishing out enough setbacks along the way to raise doubt. This will satisfy fans of sweet romances and tender family sagas but will disappoint readers looking for high passion or insightful animal stories.

Despite a horse-ranch backdrop, the book stays focused on human relationships. It orbits around the reluctant affair between Wyatt and Gabby, complicated by psychodramas among their loved ones that distract from the central romance. The narrative viewpoint switches back and forth between Wyatt and Gabby with detours to include Wyatt’s feisty father, Gabby’s rebellious son, and their meddling minister. However, the story always cycles back to the Wyatt-Gabby affair. Around it Mr. Barclay weaves a quiet tale about people with hearts of gold, each barely coping with inner demons or tragic circumstances, who learn that they need one another in order to find redemption.

This old theme has been presented in many ways by many writers. Mr. Barclay gives it a fresh spin by setting the horse ranch in Boca Raton, Florida, where Wyatt reinstitutes his dead wife’s equine therapy program for troubled teens. His wife and child were killed by a drunk driver who happened to be Gabby’s husband (also killed in the accident). Gabby’s son is now a troubled teen desperately needing Wyatt’s horse program.

The trio’s roles in the program force them to confront their grief and undertake their redemption journeys. Despite episodes of misbehavior and stormy misunderstanding, everyone on the ranch ends up resolving their issues through rational discourse and forgiveness before things get out of hand. In this respect, If Wishes Were Horses could be a fictional primer on how to deal with heartbreak and guilt in a successful, adult manner.

Such an intellectual tone comes from Mr. Barclay’s journalistic/reporting writing style, which contrasts with the “show, don’t tell” technique often found in contemporary fiction. In a simple example: “Mercy was thunderstruck. She remained uncharacteristically quiet for a time, trying to absorb Ram’s jarring revelation.”

In the show-don’t-tell style, these sentences would be stripped down to something like, “Mercy went still and cold for a long minute” or “Mercy’s eyes bugged and her mouth fell open.” Or else the original sentence would be trimmed of extraneous words to read, “Mercy remained quiet for a time, trying to absorb Ram’s revelation.”

Few of Mr. Barclay’s sentences run that lean, tending instead to give more information than what’s needed to convey scene, feeling, or personality. This deprives the story of intensity, which is exacerbated by the absence of high stakes. While any of the characters would suffer if they failed to get what they wish for, there’s no sense of threat to their future survival. All have money or employment, family and friends, and options to fall back on. Only Ram, Wyatt’s father, who has been diagnosed with Alzheimer’s disease, has no hope for a happy ending.

Yet Ram proves to be the most engaging character, to the point where he upstages the main story. He makes the biggest mistakes, takes the biggest risks, has the most to lose, speaks most intensely with the most other characters, does the most unusual things, makes the most generous gestures, and has the strongest influence on everyone in the book. He’s also given the most cogent description: “If I were asked to sum up my father’s personality in just three words,” says Wyatt, they would be “Ready . . . Shoot . . . Aim.”

Ram’s situation reveals the antagonist against which all the characters struggle. It’s not anything human, or supernatural, or evil, or even named; rather, it’s just Life delivering hard knocks to a bunch of nice, upper-middle-class people, who stagger from the blows, learn important lessons, then recover and move on to something better that validates their experience.

Regardless of whether the novel itself is a romance, this phoenix-rising-from-the-ashes concept is classically romantic.