If: The Untold Story of Kipling's American Years 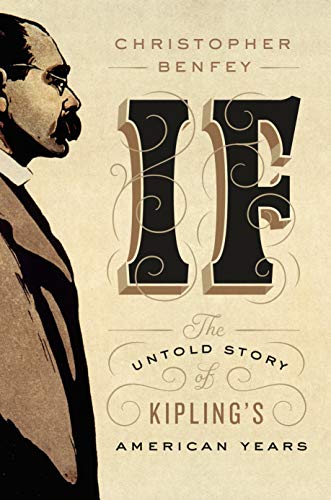 “If offers compelling research, information, and speculative insight. It reminds us all that we should read Kipling again.”

Rudyard Kipling once was, arguably, the best-known writer alive. For roughly 30 years, from 1890 to 1920, he was the most popular and financially successful author in the world. His short stories and novels and poems were everywhere recited; he was the first English artist to receive the Nobel Prize—and the youngest ever, at 41, to be so anointed. A confidante of presidents and kings, his pronouncements on the soldier’s life and “the white man’s burden” were hugely influential. There’s no American author today who remotely equals Kipling in terms of political consequence; the closest we have come, perhaps, was decades ago when Norman Mailer proposed himself a candidate for the Mayor of New York.

Which was a joke. Not so for Kipling, who could have become a Member of Parliament merely for the asking; when asked, the writer refused. At his death he was buried in Westminster Abbey, right by the graves of Chaucer and Tennyson; thousands mourned. Teddy Roosevelt, John Hay and Henry Cabot Lodge---to name only a few of his “stateside” admirers—thought the world of Kipling, as did a series of Prime Ministers; his moral sway and currency was huge.

Poems such as “If” and “Recessional” stood as sacred texts for fathers and sons, as well as of the British Empire writ large. His novel, Kim, would come to be an instructional manual for C.I.A. operatives in Vietnam; it served as a kind of primer for the techniques of espionage. It’s near-impossible to overstate the reach and power of Rudyard Kipling’s writings, though lately (in part, perhaps, because of our altered sense of what it means to be an empire builder) his reputation has been tarnished, and his sway reduced.

Now Christopher Benfey reminds us of both the merits and demerits of both the man and work. He has written, earlier, of The Double Life of Stephen Crane, and Degas in New Orleans; another of his titles deals with Love, Art, and Scandal in the Intersecting Worlds of Emily Dickinson, Mark Twain, Harriet Beecher Stowe, and Martin Johnson Heade. His sixth book continues in the vein of cultural biography and, as its subtitle suggests, tells “the untold story of Kipling’s American Years.”

It’s quite the tale. India and Great Britain are the two nations most often associated with Kipling, but he had close ties, as well, to America. As Benfy asserts, “Kipling’s decade-long engagement with the United States can best be seen as a quest for a lost paradise.”

In Brattleboro, Vermont, he built himself and his American bride a house he called Naulakha, in honor of a dear dead friend (and his wife Carrie’s brother), Wolcott Balestier. There he wrote much of the Just-So Stories, The Jungle Book, Captain’s Courageous, and Kim. There he raised his beloved daughter, Josephine—whose early death came close to killing her father—and his son John, dead in the First World War.

Among the bitter recantations of his Epitaphs of the War is this damning couplet, composed in the voice of the dead:

“If any question why we died,

Tell them, because our fathers lied.”

So the notion of Kipling, rifle in hand and happily waving the Empire’s flag is over-simplified and, to a degree, inaccurate. Benfy spends a good deal of time—perhaps too much—on parsing the meaning of the phrase, “A Fool lies here who tried to hustle the east.” He dissects competing definitions of “hustle” as “hurry” and “con,” and comes down on the side of the latter.

He writes of Kipling’s mysticism and fascination with the paranormal; he describes the boy’s idyllic childhood in India and rude awakening in England, under the care of a sadistic foster mother; he reports on the author’s devotion to Henry Wadsworth Longfellow, Ralph Waldo Emerson and, importantly Mark Twain, to whom young Rudyard made a pilgrimage in upstate New York. (Theirs was, early on, a mutual admiration society until their views on war diverged; among the illustrations is a photograph of the two men receiving honorary degrees from Oxford.) Fascinated first by trains, then motorcars, the deracinated Englishman dreamed of deep roots in Vermont.

This would not come to pass. As Benfy writes, “His departure from Brattleboro n 1896, he confessed, was the hardest thing he ever had to do. “‘There are only two places in the world where I want to live, Bombay and Brattleboro,’ he said. ‘And I can’t live in either.’”

His brother-in-law, Beatty Balestier, was—by most accounts—a ne’er do-well and drunk. He had sold Rudyard and Carrie the ten acres overlooking Mt. Monadnock on which they built Naulakha, but their relations were contentious and came almost to blows on the road into town. Kipling had taken a fall from his bicycle, and “At precisely that moment, Beatty, driving his carriage and roaring drunk, loomed into view and demanded to talk. “‘If you have anything to say, say it to my lawyer,’ Kipling replied. Beatty lost his temper. ‘By *****, this is no case for lawyers,’ he bellowed. ‘If you don’t retract those **** lies, I will punch the ***** soul out of you. I will give you week in which to retract, and if you don’t I will blow your ***** brains out.’ Kipling filed a complaint through his lawyer, and Beatty was arrested for ‘assault with indecent and opprobrious names and epithets and threatening to kill.’”

The asterisks are Benfy’s, and one could wish he’d been slightly more explicit as to the nature of the quarrel, since it effectively ended Kipling’s love affair with America. He and Carrie packed their bags and would not return. Their principal residence, thereafter, was Bateman’s—an old house in Sussex where Kipling, more and more reclusive, lived out the rest of his life.

The last chapter of this book, however, deals with “American Hustle” and the writer’s posthumous influence on the conduct of war in Vietnam. It’s an ambitious inquiry into the work of Philip Caputo, Michael Herr, and others, but seems somehow beside the literary point—or, rather, it focuses less on Kipling than Edward G. Lansdale and William Westmoreland and feels like an appendix more than a conclusion. The studies of this writer’s life and work are numerous; yet taking his full measure remains no easy thing.

Still, If offers compelling research, information, and speculative insight. It reminds us all that we should read Kipling again.