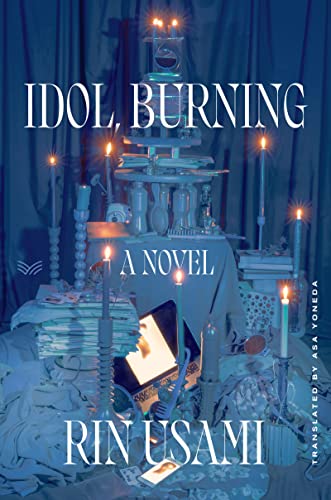 An international sensation, Idol, Burning appears in English for the first time and is sure to find a new fan base. The afterword makes clear the author’s intentions, to show the real harm caused by social media “flaming.” The story is ostensibly driven by what happens when a member of a musical group, Masaki Ueno, punches a fan, starting a social media uproar. But the real story is the disturbing way some fans obsess so much about their favorite band members that their identities become inextricably linked to their idol, or “oshi,” as the term is throughout the book.

Akari, the narrator, is a high school student with clear mental health issues. She spends a lot of time in the school infirmary because of anxiety, unable to face the stress of the classroom. The thing that heals her, that keeps her going, isn’t medication or therapy. It’s her oshi.

“When my eyes met his, they reminded me of how to really see. I felt an enormous swell of pure energy, neither positive nor negative, come rising up from my very foundation, and suddenly remembered what it felt like to be alive.”

Akari spends her days scrolling through videos, instagram, various forms of social media to follow her oshi. The money she earns at a restaurant is all spent on concerts and every conceivable kind of merchandise associated with Masaki. She writes blogposts about Masaki, sorting out her feelings when the news of the infamous punch first hits. She doesn’t care so much if he really hit someone or what he was fighting about. What matters is asserting her deep-seated loyalty no matter what, especially as the negative posts pile up.

The author describes well this immersion, the way Akari exists only in relation to her oshi, with no sense of self apart from appreciating every nuance of his life. Her oshi is part drug, part coping mechanism.

“Controlling myself took energy. It was much easier to ride the music and let it move me along, like a train or an escalator.”

When Masaki announces the band’s last concert, that the group is breaking up, Akari is devastated, completely unmoored. Of course she gets tickets to this final appearance:

“I saw him on the jumbo screens, the sweat pouring out of him, and my sides gushed in response. Taking him in awakened my true self. . . . Through getting to know his existence, I tried to sense my own.”

If social media flaming is supposed to be the villain in this book, the real trouble seems to be the deep-seated need to find meaning in illusions. With powerful language, Usami reveals a terrifying world of teenage fan obsession—and may provide a healing corrective just as current social media companies work to bury us deeper in these illusions.