Ideas in Food: Great Recipes and Why They Work 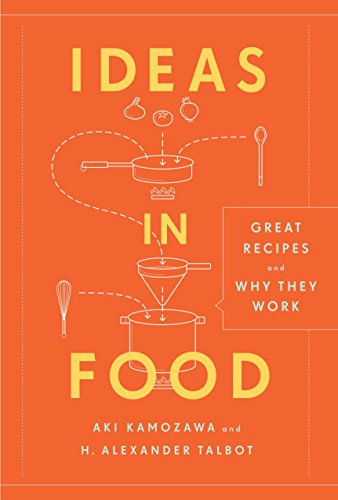 Do you:
a) Think food and high-tech belong in the same sentence;
b) Own at least one smoker;
c) Travel with your whipped cream canister and multiple cartridges;
d) Keep liquid glucose in your pantry;
e) Dream of buying your own $1,000 immersion circulator so you can go around talking about your “sous vide” supper;
f) Answer e) with “Whaddya mean, dream? I own two!”
Or
g) Just want some fun facts to share at your next boring work party?

Answer “yes” to at least one of these, and you’ll know it’s time to read Ideas in Food. From smoked maple syrup to octopus confit, this is a book to make food science fun.

Authors Aki Kamozawa and H. Alexander Talbot, who met (and later married) while working as chefs in Boston, own Ideas in Food, a Pennsylvania consulting business, and maintain a blog by the same name filled with sometimes far-out kitchen experiments.

Those attempts lead to recipes that often demand special equipment: smokers, cream canisters, immersion circulators, pressure cookers, a pain de mie bread pan, and vacuum sealers. Although the authors give alternatives where possible, they require more persnicketiness than many cooks could tolerate. Lacking an immersion circulator, for example, you could bring a large pot of water to 152.5 degrees, add potatoes, lower the heat to 149 degrees, and hold it there for two hours—but would you?

Of course, if you’re reading this book, you would likely at least consider it—and then you’d be on your way to a batch of ranch-flavored gnocchi, one of many recipes that turn the standards on their heads. After the water bath, those potatoes get salt-baked for an hour before finally getting turned into dough.

For some of the recipes, the extra effort involved just won’t seem worth the trouble for a home cook, for whom the first two-thirds of the book is written. If you want a hard-boiled egg, will you really cook it for an hour in a circulating water bath? Maybe so, since it requires little other attention—but how about gently cooking an egg, icing it down, peeling it, then reheating it for 10 minutes at 140 degrees before serving . . . a simple soft-boiled egg?

Yet even for cooks who can’t see themselves taking on that hassle, the book makes a great read, with explanations of the science behind the recipes leading every section (for example, on meat, dairy, fruit, bread, brining, and freezing—oops, make that cryo-blanching).

Even the chapters that lack a gee-whiz recipe offer some impressive ideas: sourdough spaetzle, anyone? Ideas in Food also offers a variety of useful, quicker, gadget-less recipes, such as “BBQ rigatoni,” which calls for soaking pasta in a mixture of water and barbecue sauce for four hours before a quick final cooking, or a straightforward Hollandaise sauce made with browned butter.

Cooks can also pick up tips easily applied to their own recipes, if they’re reluctant to go all the way with the book’s versions. Mozzarella recipes, for example, usually call for mixing salt in as the cheese is stretched, not always an easy way to distribute it evenly. Ideas in Food instead offers what is, in retrospect, the obvious suggestion to salt the hot liquid used for the final dipping.

The last section, “Ideas for Professionals,” may be the least-used but most-read for many home cooks. Learn here how to use xantham gum, methylcellulose, transglutaminase (“meat glue”), and liquid nitrogen, in science-for-nonscientists explanations. Whether you find these recipes fascinating and mouthwatering or too much messing around with your food, the straightforward writing will hold your interest with its details of trendy chef methods, setting the book apart from other food science books.

And even this section offers recipes easily attempted at home, with the ordering of a few special ingredients. Make a chef-worthy foam of cherry juice with a blender, stand mixer, xantham gum, and Versawhip (a treated soy protein), or light and crisp onion rings from a batter flavored with coffee and aerated with carbon dioxide from an iSi canister (or a pricey carbonation rig and CO2 canister, if you start feeling like a pro).

Pro or no, if you’re going to read Ideas in Food, start clearing some shelf space and prepare your wallet: Serious, supersize-gadget desires will surely follow this food-science fun.