I'd Die For You: And Other Lost Stories 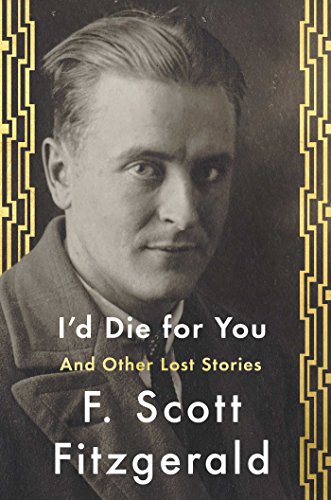 “The stories in the volume are all worthy—some extraordinary.”

The thing is that, when faced with a volume of, say, “the uncollected stories,” or worse, “the unpublished stories,” or as in the case of the volume in question, I’d Die for You and Other Lost Stories by literary great F. Scott Fitzgerald, the reader quakes. Because the contents gathered together in these sorts of collections tend to be bottom of the barrel stuff. The dreck and the dross, which, far from celebrating the talent of a given author, most usually represents a publisher eking out the last few dollars available from that author’s estate.

The new Fitzgerald volume is something quite different.

The stories gathered together, introduced, and edited by Anne Margaret Daniel, having been “lost” for various reasons—but mostly because magazine editors wanted stories of the usual Fitzgerald sort, what with Bernice bobbing her hair and such, and so refused the edgy and even somewhat experimental fiction that Fitzgerald preferred to create as he grew as an artist. They are, to a one, most worthy of having been “found.”

That stories like the titular “I’d Die for You,” (which Fitzgerald based upon the suicide of Peg Entwhistle, who, after failing to find success in the early film industry, jumped off the Hollywood sign at age 24) and the wonderful “The Women of the House”—to name the two that together make up the heart of the book—could have been languishing in a drawer in some desk or other seems quite remarkable, given their excellence and pedigree.

Happily, they are here in print now, with individual introductory notes from their editor in a beautiful volume that is as far from the usual posthumous crap as our last two presidents are separated in terms of education, skill, and gravitas.

As Ms. Daniel explains the collection:

“Most of these stories are from the days when America, and the world, was in the Great Depression. Fitzgerald’s fortunes, so high just a few years before, had fallen with the country’s. He was often sick, often broke, and anxiously shuttling between the Baltimore area—where he and Zelda had settled with their daughter, Scottie—and a string of health resorts in the North Carolina mountains . . .

“The first story in this collection, ‘The I.O.U.,’ comes from Fitzgerald’s earliest days as a writer; and the last complete ones, ‘The Women in the House’ and ‘Salute to Lucy and Elsie,’ from a stint in Hollywood in 1939 when he had quit drinking and was eagerly working on a new novel, published after his death as The Last Tycoon. There is writing from every stage of his well-chronicled career—the youth reveling in bright days and nights of success and celebrity; the husband and father at thirty suddenly plunged into a world of doctors and hospitals because of his wife’s illness; a struggling man in poor health himself, looking for that new vein to open up for his own writing; and, above all, a professional writer who never failed to take inspiration and energy from the American landscape and personalities around him. That hunger never ended for F. Scott Fitzgerald, and these stories show it.”

The particular joy of this collection, as noted above, is that the stories collected come from all phases of Fitzgerald’s career, from the young romantic to the broken and brittle cynic. And note, whether by choice or through life experience, the two words that best describe the various protagonists on display here can be taken from the editor’s note: the “struggling man.” Fitzgerald’s heroes yearn and fret, and, very often, try to make sense of situations they find mysterious and/or intolerable, but above all else they struggle.

They are terriers all, who until the final, sudden clenching of their chests, push on, as if life itself were a magic act and they had a few more rabbits in their hats and silk scarves in their pockets.

As these stories testify, it was not his belief in romantic love that propelled the author-as-struggling-man. That particular affectation faded early. It was instead the belief that a career that had started with such alarming success, and that brought such riches, could, after having fallen behind and below the work of so many others in the minds of the critics and the audience alike, could resurrect one day—at least enough that Fitzgerald could to some extent enjoy the struggle.

Among the surprises in the volume is the way in which Fitzgerald was, very soon after his early success, treated by the agent and editors who, only a few years earlier, fought to be able to publish his short stories. Again and again, rewrites are demanded. Again and again, his authorship was demeaned. In one instance, with the extraordinary “The Women in the House,” written at the end of his career, he was simply told to “cut six thousand words.”

And more than anything else, Fitzgerald is chastised for being ever more unwilling to simply write the rather childish romantic romps that were, at first, his bread and butter.

And again and again he took pains to explain his view of the situation. As here, in a 1939 letter to an editor that accompanied the manuscript to “The Women in the House:”

“Asking you to read it I want to get two things clear. First, that it isn’t particularly likely that I’ll write a great many more stories about young love. I was tagged with that by my first writings up to 1925. Since then I have written stories about young love. They have been done with increasing difficulty and increasing insincerity. I would either be a miracle man or a hack if I could go on turning out an identical product for three decades.”

This new volume I’d Die for You celebrates Fitzgerald’s work beautifully and appropriately: by taking the shackles of expectation off his wrists, and by exploring the paths that F. Scott Fitzgerald himself wanted to walk (most often in stories that went unpublished or published in altered form or format) and not gathering together the usuals, from that Ritz-sized diamond to Benjamin Button (which is, after all, thanks perhaps to the movie, a well known story and one that displays just how experimental Fitzgerald’s work was, not only for his time, but also today) to all those dancers in the fountains of days now long gone in what was once called the Jazz Age.

The stories in the volume are all worthy—some extraordinary. And while I’d Die for You, in all its esoteric glory, is perhaps not the best introduction to Fitzgerald’s work in general, it is a necessary collection for all those whose appreciation of F. Scott Fitzgerald extends beyond the memory of having been forced to read Gatsby in high school.