The Icepick Surgeon: Murder, Fraud, Sabotage, Piracy, and Other Dastardly Deeds Perpetrated in the Name of Science 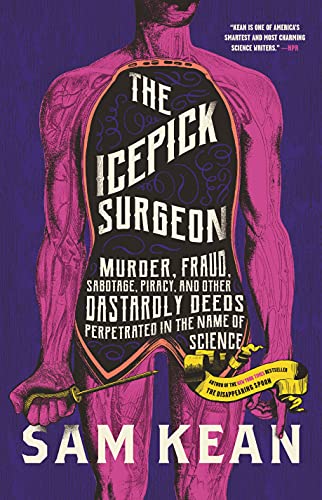 Dr. Walter Freeman (1895–1972), a Groucho Marx look-alike, called himself “the Henry Ford of psychosurgery.” Also known as the icepick surgeon, he stands out among the deviant scientists recalled in Sam Kean’s wonderfully readable The Icepick Surgeon.

Freeman was a master of the lobotomy, a procedure used to “treat” the insane in the days before antipsychotic drugs. The idea was to remove brain tissue, severing connections between the frontal lobes and emotional centers. Many patients calmed down enough to rejoin their families, says Kean. Others went back to asylums, much more docile than in the past.

Freeman pioneered the kitchen-icepick method of getting at the frontal lobes through the eye sockets. (Earlier surgeons drilled holes through the top of the skull.) A slim rod could slide past the eye, puncture the orbital bones, and reach the brain. One then wagged the rod back and forth, destroying brain tissue. The patient was left with black eyes. Often, they were also left with dulled personalities and little self-awareness.

Freeman toured the nation’s asylums, performing as many as two dozen lobotomies a day, always with press coverage. He sometimes operated on four-year-olds. Deemed barbaric by many, his procedure diminished the constant howling in many insane asylums.

Some, like Thomas Edison, did simple things like demonstrating on a dog how alternating current killed at lower voltages than direct current.

Nazi doctors, on the other hand, shot people with poisoned bullets, transplanted limbs without anesthesia, and rubbed glass into open wounds to study healing. Joining the Nazi party in greater numbers than other professionals, they were attracted by Nazi rhetoric about “curing” society’s ills, say Kean. Non-Aryans were the subjects of their experiments.

The author devotes a chapter to each deed (fraud, piracy, etc.), exploring the most engaging moments (criminal and otherwise) of scientific behavior. The British naturalist William Dampier (1651–1715), explored the seas, becoming an “unsurpassed” observer of nature (and perhaps the first travel writer) as well as a daring buccaneer, seizing doubloons from Spanish galleons.

Another naturalist, Englishman Henry Smeathman (1742–1786), a foe of slavery, traded with slavers for supplies and equipment and hitched rides on slave ships on his expeditions to Sierra Leone. He eventually traded slaves for goods and sold others to plantations in the Americas to fund his research.

Many specimens collected via the slave trade “still reside in museums to this day.”

Kean’s account of the exploits of John Hunter (1728–1793) explains that the Scottish anatomist and surgeon became a model for Robert Louis Stevenson’s Dr. Jekyll and Mr. Hyde. Hunter’s “vulgar manners” made him a favorite of fellow grave robbers. His house had a back entrance where “resurrectionists” could unload corpses under cover of night.

The robbers worked in teams, many with female spies who kept careful watch at hospitals and workhouses (waiting for people to die). Spies also had to spot booby traps at burial sites, such as “spring-loaded rifles buried in the dirt and ‘torpedo’ coffins that exploded if tampered with.”

There are many modern-day horrors in the book, including the study of long-term effects of syphilis among 400 Black men conducted by the U.S. Public Health Service in Tuskegee, Alabama, between 1942 and 1972. Doctors never told participants that they had syphilis to prevent them from seeking treatment.

“What makes mad scientists mad isn’t their lack of logic or reason or scientific acumen,” writes Kean. “It’s that they do science too well, to the exclusion of their humanity.”