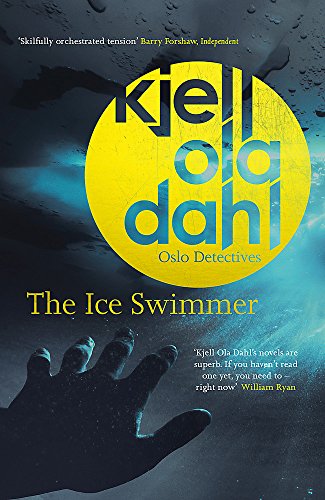 It’s 24 degrees below zero in Oslo, Norway, as police detective Lena Stigersand watches a corpse being pulled from the harbor, in contrast to the Christmas decorations around the market area. A crane hauls the body from the water: “The dead man rose higher and rotated in the air. The lapels of his jacket hung like heavy pennants. Water dripped and immediately froze into icicles on his clothes. . . . The water on the dead man’s face froze to ice as they watched.”

Lena’s quickly aware that this is a suspicious death, with the body identified right away but the clothing and alcohol-free stomach contents denying the proposal that it could be a suicide. Yet who would want to kill Sveinung Adeler, a relatively minor political aide?

When a journalist steps into Lena’s life, seducing her with both hot sex and hints about the dead man’s significance, things look promising: She’s feeling great about herself and she has more to add at the department meetings. Her colleague, Detective Gunnarstranda, is working on another death that looks at first like suicide, where a homeless woman’s run over by a train after leaping in front of it. When the two deaths, and then a third, show signs of being linked, the detectives must negotiate the perils of governmental interference, including a member of Parliament whose staff bites with powerful teeth.

Lena’s path is the more compelling in The Ice Swimmer, as she’s handling (badly) a medical diagnosis that puts her way off balance in a very recognizable way, so her errors of judgment in the investigation make perfect sense. Meanwhile, Gunnarstranda’s pursuit of the criminal behind the deaths is suspenseful and dangerous:

“Gunnarstranda got up. The shadow slipped through. Gunnarstranda went after it, through the door opening. . . . He was standing on the edge of a sheer drop. A square hole in the floor.

He gasped as his hands groped for something to hold on to. They found nothing, but he regained his balance.

A vibration made him step back two paces without his knowing why. A crash made him start. A concrete block had landed where he had just been standing. It smashed into pieces and sprayed his face with bits of cement and gravel.

. . . At that moment he received a violent push and fell. He broke his fall with his hands and grazed both palms. Someone jumped over him and ran down the stairs.”

Regular readers of Nordic noir may recognize Gunnarstranda as one of the two noted detectives in Dahl’s Faithless, and this is the sequel, second in Dahl’s popular Oslo Detectives series, finally being translated and brought across the Atlantic. The translator, Don Bartlett, also works with material by Jo Nesbø and Gunnar Staalesen (the Varg Veum crime novels), and provides a smooth text that’s only slightly “foreign” in feel (more a question of the “music” of the phrasing; nothing awkward). Inspector Frank Frølich is absent from this second title in the series, except for a short visit that Gunnarstranda makes to tap his expertise. Hard to say what will follow, but it would be great if these all returned in book three in a year or so.

Although the crimes and their locations are dark, Dahl’s detectives arrive with force of character and are willing to share a bit of wisdom with each other. That’s lucky for Lena in this case, because a police detective going to bed with a journalist hints at disaster to follow, and she’s far from immune.

Well written, quickly paced, Dahl’s series fits the traditional police detective model (think Michael Connelly and Karen Slaughter), including the hint of despair that a high-alcohol profession brings along. Good reading, and all the plot threads fit together by the end, although there’s a rather odd postscript chapter to pick up the last bit. But perhaps it’s also to lay the start for the book that comes next.