Ice Bear: The Cultural History of an Arctic Icon 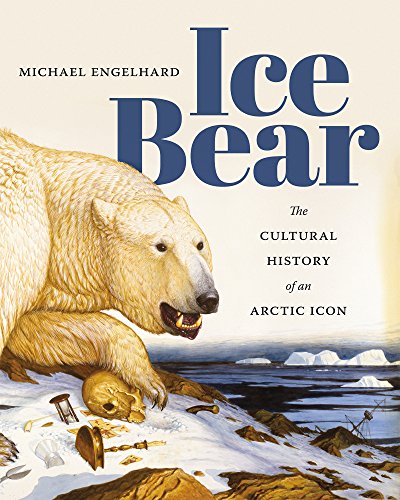 The majority of humankind has long since stopped depending on hunting for subsistence, but we are still strangely fascinated by wild animals, the larger the better. In particular, the sheer strength, charisma, and free spirits of carnivores in their natural habitats along with their very otherness both attract and repel in a mix of awe and fear.

If you are lucky enough to get close enough to make eye contact, you can’t help but be thrilled by the magnificence of nature’s design while wondering who is going to get eaten here! There is something alien yet recognizable and knowing in that mutual gaze.

This is especially the case with animals that resonate as physical and cultural familiars like bears as part-time bipeds who sit up to breastfeed their cute cubs, only two of many aspects in which they resemble us. And looming especially large in human history is the massive and relatively rare polar bear—the majestic white ghost and top predator of the ice and tundra on the roof of our world. Although exotic, we see ourselves in them. Yet no other animal except perhaps the wolf divides opinions so strongly on the conservation spectrum.

In Ice Bears: The Cultural History of an Arctic Icon anthropologist, essayist, and wilderness guide Michael Engelhard unpacks the interactions between man and Ursus maritimus and the different meanings attached to these animals over time and across cultures.

Using an interdisciplinary umbrella of anthrozoology, or animal studies, which emphasizes our place in the world of living things, Engelhard uncovers our changing perceptions of the variously termed ice bear, white bear or polar bear to suggest how it has become a sentinel of the Arctic and an indicator species of planetary health including our own.

Via wide-ranging cross-cultural comparison of the history of ideas about ice bears, Engelhard holds up a mirror that shows us much about ourselves as well as the animal other.

“Deeply held preconceptions keep us from seeing the true nature of some animals. The polar bear is a prime example. Over the past eight thousand years, we have regarded it as food, toy, pet, trophy, status symbol, commodity, man-eating monster, spirit familiar, circus act, zoo superstar, and political cause célèbre. We have feared, venerated, locked up, coveted, butchered, sold, pitied, and emulated this large carnivore. It has left few emotions unstirred.”

The product of Englehard’s exhaustive research is an eclectic, comprehensive, compelling, and very readable cultural iconography elevated to a level of art form by the inclusion of well-chosen and often stunning illustrations on almost every page. Ice Bears is a visual National Geographic with real verbal punch!

The second chapter highlights The Life and Death of a Superstar—Knut, a zoo polar bear born in 2006 in Berlin. Arguably the world’s most famous bear, the cub attracted millions of visitors and made a fortune for the zoo through sales of merchandise and branding underscoring the value of an animal as a poster child for ecology.

“The media had at last put a face to the climate crisis. One more photogenic than Gore’s. It was a predator’s, but fluffy. Nature defanged.”

But polar bear cubs in captivity do not stay cute and cuddly for long and start to be threatening at an early age, at which time their marketability dwindles. So it might have been a mercy that the adolescent Knut drowned at the age of four from a seizure in front of his still-adoring fans. “The resulting outpouring of grief turned vitriolic over Knut’s after-life, when the city’s Museum of Natural History presented to Berliners a sculpture wearing their beloved Knut’s pelt!

This extended example of the hold polar bears have on our imagination sets up the structure of the remainder of the book which is to show us, in roughly chronological fashion, “how his kind came to live in our midst and our minds.”

Starting with the bear’s place in Norse culture and medieval Europe as a subsistence resource, early commodity, prestigious gift good, we move briskly though the animal’s role in entertainment, such as bear baiting in Elizabethan England.

Engelhard then deals with the Western “discovery” of white bears and the Native people who cohabited with them on their home ground in the heydays of enlightenment and exploration. This chapter examines how the early scientific knowledge generated by these encounters shaped the polar bear’s place in contemporary societies.

It is logical to follow this with a chapter on the polar bear as white terror and our fear of becoming their dinner, set in the context of exploration literature and growing cachet of trophy hunting with the onset of modernity. We continue with a chapter on bears in two relatively modern institutions, the circus and the zoo., which already seem almost passé.

The lens then zeros in on more mainstream anthropological material. One chapter deals exclusively with indigenous uses of the bear and their ceremonial framework. This is followed by a cross-cultural examination of eating polar bear.

“The remaining chapters analyze not only Native customs and perceptions, but also trophy hunting, taxidermy, polar-bear watching, and political activism. As the distinction between Native and non-Native worlds has grown more complicated since the late nineteenth century, these final sections—focusing on the bear’s roles rather than chronology—draw on both perspectives to show contrasts and congruencies.”

The end product, Ice Bear: The Cultural History of an Arctic Icon, is a treasure chest of encounters and events that have gone into weaving the fabric of our collective imaginary of this lord of the North Pole. It is a compelling read, written in accessible language by a born storyteller based on solid scholarship. You can inhale the book a chapter at a time, or dip into snippets of entertaining anecdotes and interesting facts. (Did you know that the “whiteness” of adult polar bears is a trick of refraction?)

But it’s the sumptuous illustrations that bring the stories to life and make them linger in your mind. Some are stunningly beautiful works of art. Others are detailed photographs of ethnographic, historical, or archaeological record. Then there are drawings and cartoons as well as advertisements in which the polar bear is used to sell causes as well as commodities.

While many of these illustrations are highly idealized representations, others are graphic reminders of the often brutal ways of the wild where bears behave like the animals they are and everything is potentially food to be killed, including each other and ourselves. This forces us to strip some of the scales of centuries of anthropomorphism and anthropocentrism from our eyes. Polar bears are neither teddy bears nor circus clowns.

The world is certainly the richer for having such fascinating and enigmatic creatures as ice bears in it. Surely, it would be a tragedy to allow anthropogenic climate change to destroy their habitat and hasten their demise as well as being a harbinger of things to come for other species?