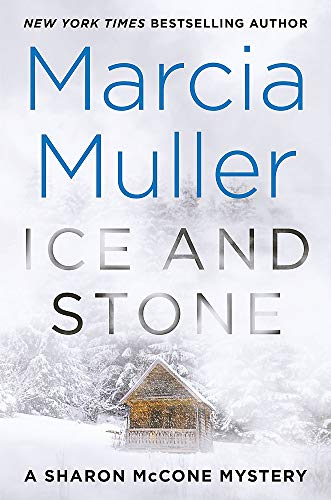 “the story holds together and delivers a fast, intense, thought-provoking read.”

Thirty-five books are a lot to write about one character, but Marcia Muller keeps going with her Sharon McCone mystery series. This private investigator—one of the earliest female sleuths in fiction—has undergone dramatic changes and had many extraordinary adventures since 1977. Ice and Stone is the latest, and uncomfortably current in its focus on racial bigotry and violence against women in the United States.

Here the topics are combined in a case where Sharon goes undercover to investigate the murders of Indigenous women. It takes her from cushy San Francisco to isolated impoverished communities in the wilderness of northern California. She is hired by an activist organization, Crimes Against Indigenous Sisters, that provides her with a secret cabin in the woods to hide in when she’s not pretending to be a journalist in town.

Sharon initially blends in with the locals because of her part-Shoshone heritage, which gives her the right look, and subjects her to the same prejudices. She has to walk both sides of the street at the same time, which messes with her head and shifts her perspective.

Soon her probing questions give her away, and she’s shunned by people who could provide useful information while targeted by hostile people who can—and want to—hurt her. These include the racist white sheriff of the county, who dismissed previous murders by ruling them as accidents or playing jurisdiction games so that nobody actually investigated; and a corrupt wealthy white family manipulating a land grab from the Natives to get a monopoly on a material crucial to a lucrative new drug trade.

The risks Sharon takes in confronting them will turn any reader into a nail-biter.

There are occasional breaks in the tension, even a moment of levity, when Sharon experiences a turnabout of the assumptions she’s fighting against. Her birth father, who provided her Shoshone genes, is helping her collect information on the Native participants in the case through the fabled and clichéd “moccasin telegraph.” When he offers to email the information, Sharon exclaims in amazement:

“The moccasin telegraph is online?”

“Perhaps because you were raised white, you think we are still sending smoke signals into the sky?”

I was stunned. Silent. Elwood said, “We old farts get around, too.”

That’s probably the lightest moment in the novel. The rest is dark and angry. Sharon has a lot of personal interests at stake in this case, and almost every aspect of it offends her values. So she’s determined to find the killers and bring them to justice. At the same time, she has to handle the aftermath of somebody bombing her office and figure out if it’s related to her case.

Fortunately she is a pilot with her own aircraft so she can go zipping back and forth between San Francisco and the boonies. She’s also fortunate that she’s built up a team of employees and associates, including several family members, whom she can tap at a moment’s notice to cover her back and uncover important information.

In this volume she’s unlucky in that her partner-spouse, Hy Ripinsky, is off on another case and can’t help her. But she has plenty others available, most of whom are younger. Sharon confesses to the reader she is feeling her age. There are even vague hints she might retire. But until then, she’s still willing to walk into danger and bring down bigoted bad men.

In the same way the narrative contains moments of levity and insight, there are also lines that give an extra zing. One that comes early in her investigation: “The room looked like a cyclone had hit a thrift shop.”

That’s a fresh way to describe a common setting in novels, i.e., the pigsty that many suspects or low-class characters live in. Sharon goes on to include details to help draw that particular character, but the line itself is so evocative readers can fill in the scene easily with their own imaginations.

Such deftness in writing combined with the lead character’s passionate morality and willingness to fight for the underdog are what have made this series successful for its long run. This volume is edgier than some of its predecessors, and at times it’s hard to distinguish between Sharon’s outrage and the author’s. But the story holds together and delivers a fast, intense, thought-provoking read.