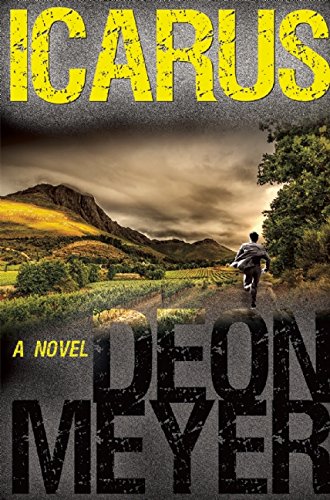 Christmas. Goodwill and peace to all. But not, it would seem, if you live in the Cape of Storms.

A few days before The Big Day, a young photographer discovers a plastic-wrapped corpse amid the sand dunes north of Cape Town, due to the aftermath of a large storm hitting the area.

The only thing found on the corpse is an iPhone no longer working; however, it doesn’t take long for the police to identify the body as that of Ernst Richter. He disappeared mysteriously almost a month previous. Initial reports suggest he was strangled:

“Heaven and earth conspired to expose Ernst Richter’s corpse, the universe seemingly intent on reaching out a helping hand for justice.”

Richter was the notorious high-tech whiz behind the controversial Alibi.co.za, an Internet dating service that provides unfaithful partners with sophisticated cover stories to hide any infidelities they are engaged in from their spouses.

Meanwhile, Captain Benny Griessel of the South African police investigative team, known as the Hawks, is called to the scene of a multiple homicide involving a former friend and colleague, Vollie Fish, who had caught two serial killers in four years. The man has shot his wife and two beautiful daughters before turning the gun on himself.

Later, Benny will confess to a colleague:

“Why did Vollie Fish shoot his wife and children? Do you know why? Because I know. I know exactly. I know what he knew. And he knew he couldn’t hold it back any more. It was coming closer, growing bigger. More and more.”

For Benny, unable to bear any more personal tragedies, four long years of sobriety are demolished on the spot, and he quickly turns to his best liquid friend, Jack Daniels, to ease his pain and nightmares. He moves out of his home into a hotel, and suddenly his relationship with former pop singing sensation, Alexa Barnard, looks to be in ruins.

He eventually emerges from his drunken hazy binge determined to quit the force he once loved. Fortunately for South African law enforcement, the indomitable Major Mbali Kaleni wants Benny and his unique skill on the Richter homicide case, and will accept no excuses or talk about resigning. Plus his good friend and colleague Captain Vaughn Cupido has been assigned to lead the case and will need all the help he can get.

Cupido is more than up to the challenge of such a high profile case. Or is he? Benny has always been in charge, and Cupido suddenly finds himself having romantic feelings for Richter’s senior colleague, the beautiful Desiree Coetzee.

The high-profile murder of Richter is quickly becoming the subject of frenzied speculation, mostly questions directed toward suspects: Could the perpetrator be one of the countless jilted spouses? An aggrieved client? Richter had so many enemies it will be like looking for a needle in a vineyard.

To add to the woes of Alibi.co.za members, someone has created a Twitter account that threatens to list all their names within a day; plus a member of parliament has now been dragged into the scandal.

The secondary characters finally get the chance to prove they are more than competent to take the lead. Cupido finally emerges out of Benny’s formidable shadow, giving us a duo worthy of any famous pair in police lore.

Perhaps one of the most telling and poignant episodes in Icarus is Cupido’s heartfelt and beautifully frank admission to Benny:

“The heart of the matter is, I can’t be Vaughn the Terrible, if you aren’t Benny the Sober. It’s like that line in the movies—you complete me.” With Benny answering drily: “And now you’re going to kiss me.”