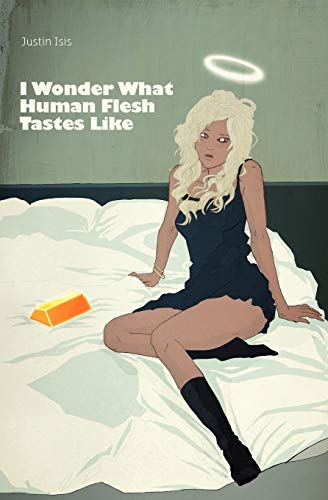 As far as collections of short stories go, I Wonder What Human Flesh Tastes Like is a highly mixed bag.

On the one hand, there were some beautiful sentences, some truly inspired imagery. On the other hand—and this is a much larger and more visible hand—most of the stories felt . . . pointless. Hollow. Lacking substance.

The characters were uniformly unlikable, self-involved, and obsessive about strange things that never seemed to matter as much as they said they did—a classic case of telling more than showing. Each story set up an interesting new point of view, and then proceeded to show us how they all shared the same peculiar sort of bizarre madness. Reading through the first few stories, this was interesting; after about half the book, it was tiresome.

The story the book takes its name from was perhaps a misstep. In the story, the POV character comes across as a mouthpiece for a young, pretentious author more than as a character, and states flat out that the title doesn’t mean anything, that it was just intended to confuse people. The story itself is distasteful and gratuitous, and ends without anything even approaching a conclusion—while serving as a microcosm of the book as a whole.

It’s a frustrating read, something along the lines of reading submissions for a litmag: there’s promise here, a lot of potential talent, an intriguingly fresh imagination, a real gift for putting words together in unexpected ways to make for some wonderfully evocative imagery—but a full collection feels premature; the glowing praise of the intro sounds like the author protesteth too much.

Author Justin Isis’s natural talent is drowned in the artifice of a new talent in love with the sound of his own voice. Maybe in five years or ten years this book would have been justified, but right now, there’s too much of the new author sure he’s changing the world when really he’s really just being obnoxious and artificial.

But this isn’t a unilaterally unflattering review. There are enough glimmers of something truly wonderful here that it will be interesting to see how Isis matures as a writer, to see if the next collection is purer, less subsumed by what reads as arrogance.

If the next book is better, perhaps Mr. Isis will actually earn the praise piled on in the introduction to I Wonder What Human Flesh Tastes Like.