I Will Destroy You: Poems 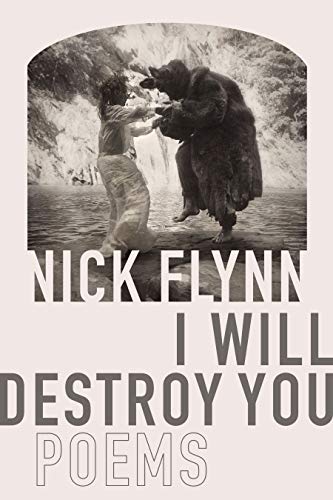 You pick it up. The cover reads I Will Destroy You: Poems, Nick Flynn. There is a forest nymph dancing with a bear. Cool, you think.

No. Not cool. Not cool at all. Instead, these scenes, these written feelings that are, some might say, the opposite of cool: shame, fear, sadness, a memory pops up, there’s regret, and more of it the more you read, also pain, lots of it. Why? You’re not the addict/drunk/louse on his/her last hallucinogenic hit narrating these pages with the lucidity of those who’ve lost their sanity.

But, see, that is what Nick Flynn does. He makes you an accomplice, shows you how bad you could have been (were?), each confessional poem uniting you, the reader, with the voice doing the confessing, until all that has happened to him could’ve just as easily happened to you, his crimes are your crimes now, and for each of these first-person, relatively short poems, a different incarnation of repentance cries for help, the plea directed at a created character, a savior (is it you?), the language faux-hopeless, the narrator, acting, as if he barely cared, while graphically (and beautifully) surrendering through verse and imagery all that he had been hiding.

“I admit you haven't heard from me

in a while. In me there’s a little liar.

I was lost in a trance... the sky wild

blue, fruit trees jeweled with ice . . . if not

for what I promised, I wouldn't be here

at all. You were with me when I found that

entering a room and having (at last!) someone else

breath for me. No one, as you know,

sets out to lose their mind. This poem began

as a secret—not from you, I didn't know you

then. Now it wears its shame like a halo.

Please, take it, rip it up, put it in your glass.

We can watch it dissolve.”

This is not out of character for Flynn, neither the theme, nor the skill for the macro-raw EMO of “please, one more chance.” In his work, life is a tightrope on which demons walk naked at night, every one of us a potential acrobat in the nude, addicted, compulsive, and dangerous.

I Will Destroy You is a two-way conversation (late-night confession?) between you, the reader, and the junkie, the drunk, the oblivious person who doesn’t want to die and, so, shares his darkness in hopes you will save him, perhaps realize this is as much about you as it is about him, his title’s threat of death, that he would destroy you, lurking in every page, as in these lines from the poem, “Balcony”:

he’d had his first drink, not right

Bookcase. For years he dragged

his furniture, every night as the sun

went away & in the morning he

put it all back in place, never con-

sidering, not once, that maybe,

he should stop. The one promise I

can make is that I'm staying

even though what knocks on our

door at night has at its heart only

my getting lost, even though

some part of it wants me dead,

which is why I feed it with a stick.”

In the vein of true confessional poetry, the redemption is in the telling of a thorough hell in terms intimate and disgraceful, in the confessing with skill, Flynn, a master of the line break to render flow and layers of meaning, makes you hang on, because the one promise I can make is that I'm staying . . .

And isn’t that the ultimate thing about lovely addicts/drunk/louses? They promise to be better, to stay, each promise, a poem, but also, possibly, a destruction.

(You close the book. It wasn’t a nymph, just an innocent, a good, little girl, still. She dances with the bear that is really a man, who, tipsy, poses, happy to hide inside the dark, furry costume.)