I Wear the Black Hat: Grappling with Villains (Real and Imagined) 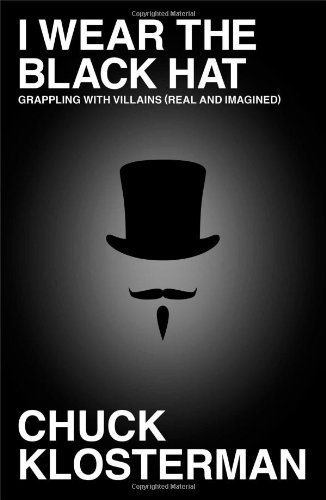 “Mr. Klosterman is as much a showman as anything else—and he never pretends otherwise.”

The jacket copy for Chuck Klosterman’s I Wear the Black Hat: Grappling with Villains (Real and Imagined) boasts that the author “continues to be the only writer doing whatever it is he’s doing.”

Although this claim may well be the hyperbolic puffery of an overworked and under-read book publicist, it raises a valid question. To wit: What is Mr. Klosterman doing?

Ostensibly, I Wear the Black Hat aims at explaining the place of villains in popular culture. This pretense, the author freely admits, provides him with an opportunity to write almost obsessively about himself and his own pet interests. While fans of Mr. Klosterman (I count myself among them) will likely find this strategy fairly engaging if, by now, somewhat overfamiliar, his detractors and those new to his work may find it solipsistic and vexing.

A villain, Mr. Klosterman argues, is “the person who knows the most and cares the least.” The late Joe Paterno, to use an example from early in the book, “knew too much and did too little” about Jerry Sandusky’s sexual predation of adolescent boys; hence his public vilification.

With this premise in mind, Mr. Klosterman goes on to examine the true roots of public outrage over such figures as Kareem Abdul-Jabbar, Bernhard Goetz, Andrew Dice Clay, Monica Lewinsky, and the long-disbanded hip hop group N.W.A.

As the list above suggests, Mr. Klosterman’s interests lie primarily in the last quarter of the 20th century. This isn’t to say that he completely ignores events of the last 13 years, as references to Sandusky, blogger Perez Hilton, and WikiLeaks founder Julian Assange offer grudging nods to the news of the day. Yet the author’s unrelenting fascination with the public figures of his youth frequently undercuts both the relevance and weight of the book’s larger discussion.

Nowhere are omissions of contemporary events more glaring than in a chapter titled “Easier Than Typing,” which investigates the issue of vigilante justice by comparing Bernhard Goetz with Batman. While the comparison works, Mr. Klosterman’s neglect of the controversy surrounding George Zimmerman’s shooting of Trayvon Martin in February of 2012 under Florida’s “stand-your-ground” law renders the chapter little more than an academic exercise.

Likewise, the chapter’s focus on Batman all but cries out for at least some examination of responses among Second Amendment devotees to the July 2012 shooting spree that took the lives of 12 people during a midnight screening of The Dark Knight Rises in Aurora Colorado.

Instead, Mr. Klosterman adds the 1974 film Death Wish to the mix, a move that he notes others have made before and which largely amounts to providing a closer-to-real-life version of his Batman example.

Of course, there’s something unfair about judging a book for what it doesn’t do—especially when what it actually does is both entertaining and intelligent. In essence, Mr. Klosterman is like the smart, snarky, witty guy you used to hang out with in college just to hear what he was going to say next. His knowledge of pop culture is clearly vast, and his ability to draw unlikely connections is his stock-in-trade. On top of that, he can be very funny.

Frequently, Mr. Klosterman comes across as the print version of a standup comedian, as when he riffs on the rationale behind his one-time hatred for The Red Hot Chili Peppers: “They seemed like all the idiots at my college who were constantly starting terrible bands and failing organic chemistry, except these idiots were famous and never wore shirts.”

Other times, he makes the kinds of pithy observations about Western culture that are usually the domain of French intellectuals like the late Jean Baudrillard: “Necessity used to be the mother of invention, but then we ran out of things that were necessary. The postmodern mother of invention is desire; we don’t really ‘need’ anything new, so we only create what we want.”

At his best, Mr. Klosterman spans decades and sometimes centuries as he connects the cultural dots that join the recent past to the distant past and, on occasion, the present. An explication of Niccolo Machiavelli’s The Prince, for example, provides the backdrop for a discussion of Joe Paterno’s aforementioned villainy and also lays the groundwork for understanding the difference between the levels of villainy we attribute to George W. Bush and Dick Cheney.

Similarly, an examination of Andrew Dice Clay’s dated brand of humor provides context for a fleeting glimpse at understanding various controversies that have sprung up around Lena Dunham’s HBO series Girls. The result is a vision of popular culture in which the details of the past, however trivial, resonate forever in the present. Whether or not this position is valid, it certainly makes for a fun read.

Perhaps belying the claim that he’s “the only writer doing whatever it is he’s doing,” the author at one point coins a term for the class of people who do exactly what he does: mercantile intellectuals—i.e., people who sell ideas for a living.

From this perspective, amusing readers with obsessive, off-the-wall theories about bygone football dynasties and fading pop culture icons can only be described as Mr. Klosterman’s shtick. Mr. Klosterman is as much a showman as anything else—and he never pretends otherwise.

Ultimately, then, the best stance to take toward I Wear the Black Hat—indeed, to all of Mr. Klosterman’s work—is the one he recommends with respect to the music of N.W.A.: “You have to take it seriously and unseriously at the same time.”

To take I Wear the Black Hat any other way would be to miss the point entirely—assuming, of course, there is one.