I Want to Keep Smashing Myself Until I Am Whole: An Elias Canetti Reader 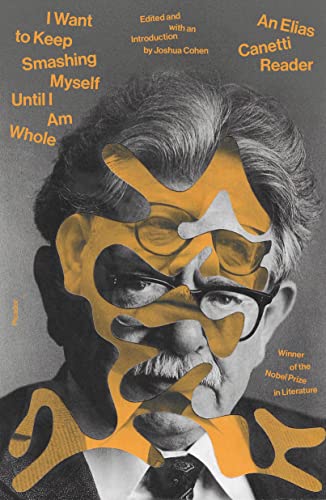 “This is more than an introduction to Canetti, the thinker, the writer, the man. It’s a profound portrait of a creative talent and the times he lived in.”

Elias Canetti lived in several countries, starting with Bulgaria, ending in Switzerland, and spoke several languages as well, beginning with the Landino native to his Sephardic Jewish community. The scope of his life from 1905 to 1994 covers most of the last century. His writing provides insightful witness to pivotal times in our recent history as well as his own unique cultural experience. Joshua Cohen brings together a blend of Canetti’s personal diaries/notebooks with excerpts from published pieces into a single mesmerizing, powerful collection. This is more than an introduction to Canetti, the thinker, the writer, the man. It’s a profound portrait of a creative talent and the times he lived in.

Cohen does more than bring a wealth of material together into a single book so that Canetti’s thoughts in notebooks are seen in later echoes in his fiction and nonfiction. He also includes excerpts from Canetti’s final book, the posthumously published The Book Against Death, translated here in English for the first time.

Readers these days are probably not familiar with Canetti’s name, unaware that he won the Nobel Prize in literature. This book may right that wrong, bring a forgotten writer back into public attention. His work seems eerily prescient as he writes about the nature of the crowd vs. the individual, the way a mob can form quickly and ruthlessly as he describes in his nonfiction book, Crowds and Power. His first novel, Auto da Fe, published in 1934 and written in reaction to the post-war culture in Austria, skewers how totalitarian thinking causes ultimate and thorough destruction.

As Cohen describes in his introduction, Canetti is very much a writer for today’s concerns: “Canetti, exile, cosmopole, polyglot, was among the first modern voices who refused . . . identity and politics and their conflation in what’s now called ‘identity politics,’ which his Viennese experience told him was the primary sign, or symptom, of the individual’s absorption by the crowd, or of the crowd’s co-option of selfhood and independent conscience.”

Canetti’s colorful childhood with Turkish grandparents, Sephardic Jewish culture, education in England, and the far-too-early death of his father, gives him much material for the stories he would find himself naturally telling. For him books, literature, ideas, stories are all central to existence—to survival even: “Nicest of all would be if you could live on words alone and did not even need to eat.”

His notes do more than describe a singular life. He describes his sense of what it means to be a good writer and why that matters:

“For me, this is the sole criterion of the epic talent: a knowledge of life even at its most horrific, a passionate love for it nonetheless, a love that never despairs, for it is inviolable even in its desperation. Nor is it really tied to a belief, for it originates in the variety of life, its unknown, astonishing wondrous variety, its unpredictable twists and turns. For those who cannot stop pursuing life, it changes in the pursuit into a hundred new, overwhelmingly remarkable creatures; and for those who just as tirelessly chase after all hundred of them, they will change into a thousand others, all just as new.”

Other notes reveal the personal experience with violent mobs that led to what Canetti calls an “illumination,” a sudden, striking awareness about the power of the crowd that he explores later in Crowds and Power: “During that brightly illuminated, dreadful day, I gained the true picture of what, as a crowd, fills our century.”

This interweaving of notes and published writing create a deep sense of how the personal gets transformed by the writer. The book captures the broad variety of Canetti’s own unique talent, his open sensitivity to the world around him, his voracious curiosity and appreciation. The editor even includes the note that explains the title: Canetti wrote that line himself, resisting the social need of “grouping” people together to make them more understandable, denying individuality. Instead, he wants to see himself as he truly is: “I want to keep smashing myself until I am whole.”

The tools for this smashing are thoughts and words, the guides Canetti uses to understand himself and his world, tools he offers the reader to use themselves.