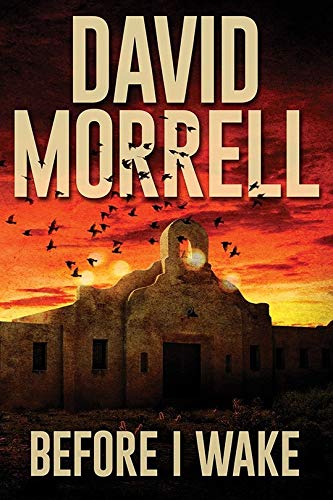 “Before I Wake is a welcome addition to the David Morrell canon. It showcases the author’s versatility and wide range of interests and influences . . .”

A husband-and-wife team offering personal protection services confront a duplicitous client. A fictionalized Thomas De Quincey tells a harrowing story of a young girl struggling to keep her brothers and sisters alive in a snowbound English cabin when their parents fail to make it home through a blizzard. And an editor with a high-powered New York publishing company seeks out a famous reclusive author who mailed in a manuscript, after decades of silence, to another editor who recently died.

Before I Wake is David Morrell’s third short story collection and his first since Nightscape (2004). Famous as the creator of John Rambo (First Blood, 1972), the action hero so memorably portrayed on the big screen by Sylvester Stallone, Morrell has published more than 30 books, with 18 million copies in print and editions in 30 different languages. To say that he’s a veteran of the publishing wars is putting it mildly.

Most of the stories in this volume previously appeared in anthologies published between 2005 and 2016, while others first appeared in magazines such as Ellery Queen’s Mystery magazine, Pages, and Night Cry magazine. Subterranean Press, a small publisher in upstate Michigan, has brought them together in a very attractively designed collection.

As with most short story collections, Before I Wake is something of a mixed bag. Morrell works in several genres, including action/adventure, supernatural suspense, and historical fiction. Some of the stories are very good while others are forgettable.

Many of his tales are based on historical fact. “My Name is Legion,” for example, draws on an account of separate units of the French Foreign Legion battling each other during World War II, supplemented by material concerning the Legion’s famous Battle of Camerone in 1863. As well, “The Spiritualist” explores Sir Arthur Conan Doyle’s well-known obsession with the spirit world by imagining a visit he might have had from his famous creation, Sherlock Holmes.

Additionally, “The Opium-Eater” features 19th century writer Thomas De Quincey, who also appears with his daughter Emily in three Morrell Victorian mysteries: Murder as a Fine Art (2013), Inspector of the Dead (2015), and Ruler of the Night (2016).

Originally published after the first novel in the trilogy, “The Opium-Eater” is a story within a story, as De Quincey relates to a tavern crowd the tale of Agnes, a young girl faced with a challenge of survival in a snowbound cabin in the Lakes District when her parents disappear during a blizzard. It’s an excellent piece, skillfully building suspense as it progresses, but in the end it tries to do a little too much and suffers from a ragged conclusion.

Perhaps the best story in the collection is “The Architecture of Snow,” inspired by the life of J. D. Salinger, who retreated into seclusion to escape critical responses to his work and, although he was never heard from again, may have continued to write on a daily basis until his death.

Morrell takes a “what if” approach and imagines an editor penetrating the shroud of secrecy surrounding the author to make personal contact. The theme of spiritual retreat resonates in this story, as it also does with the figure of the monk in “The Companions,” a very good ghost story showing off Morrell’s Twilight Zone and Ray Bradbury influences.

Other stories are based on Morrell’s personal experiences. “The Interrogator” draws on his exposure to the intelligence world, his relationship with G. Gordon Liddy, and training he received from a contract operative. “They” was inspired by his daughter’s interest in Laura Ingalls Wilder’s Little House on the Prairie series, and material incorporated into “The Opium-Eaters” came from Morrell’s grief over the deaths of his granddaughter and son from a rare form of cancer.

As readers we know all this background because Morrell provides introductions to each story. His intros are reminiscent of those written by Isaac Asimov for various science fiction anthologies in the 1960s and 1970s in that they’re highly personalized and they tend to go on and on. Morrell’s introduction to “The Interrogator” is 11 pages long, for example. The intro to “They” is almost three pages, and others are a page in length.

Reading these introductions before getting to the story is like finding out how much your spouse paid for a Christmas present before you unwrap it. You want to focus on the surprise, but your mind gets stuck on the business details.

The short story is a very special form of fiction. First and foremost, it must stand on its own without external props and explanations. Secondly, it must function as an efficient, well-oiled little machine. It must seize the reader’s attention in the opening paragraphs, it must convey all information important to understanding the story in a tight, economical manner, and it must end with a bang, a neat twist, or sublime insight.

A few of the stories in this collection meet these criteria. “An Architecture of Snow” immediately comes to mind. Others, such as “The Abelard Sanction” and “My Name is Legion,” do not.

Before I Wake is a welcome addition to the David Morrell canon. It showcases the author’s versatility and wide range of interests and influences, and while some of the stories fail to work well, others are not to be missed.