I See Your Dream Job: A Career Intuitive Shows You How to Discover What You Were Put on Earth to Do 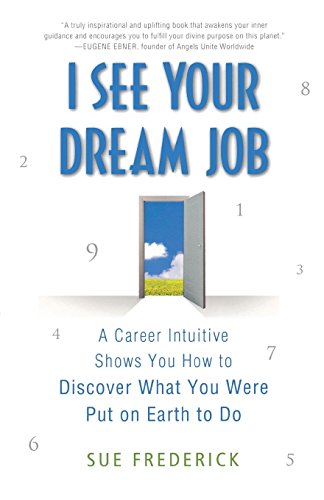 I want to be careful here.

We’re in the midst of a miserable recession. Ten, twelve, maybe fifteen million people are unemployed. We all know someone pounding the pavement. Maybe you are.

It’s as painful as any loss, particularly in New York where “What do you do?” is the first question upon acquaintance—more important than family, provenance, or education. That’s our culture: opportunity, opportunism, competition, win, loss. Yet with the death of one’s job comes purgatory, the endless search for new work.

So the temptation after reading Sue Frederick’s I See Your Dream Job: A Career Intuitive Shows You How to Discover What You Were Put on Earth to Do is to put her in her place and declare her book the result of a mating between What Color is Your Parachute and “The Ghost Whisperer.”

But, frankly, there’s a stronger, more truthful reaction: “Whatever works.”

Some career screeds implore the reader to go through endless self-assessment: forms, questionnaires, and cross-matching to come up with the ideal skill and job match. Others go for parables of endless variety; some, an elbow-in-the-ribs-go-get-’em-tiger mantra; and then there’s the occasional look back to religious or historical figures. (What would Jesus do—or Ulysses S. Grant for that matter?)

All these books contain methods created and declared successful by their authors. Such self-fulfilling prophecies are supplemented with the Toms, Dicks, and Janes who have followed the authors’ prescriptions and found nirvana. Who besides a publisher’s legal department, after all, could question such bulls-eyes around which targets are painted?

But any method that might give hope, get a person off the couch and doing something, is worth a try. For Ms. Frederick, who declares herself a “career intuitive” (that’s intuitive, spelled “p-s-y-c-h-i-c”), the way is through numerology and astrology. In other words, your birthday will provide you the codes for what you’re best and passionate at. Then it’s just a matter of pursuing what the codes tell you.

Such systems, unproven by rational science, would seem absurd. But Galileo said the earth orbited the sun and was persecuted by supposedly educated priests—the same ones who themselves extolled the inexplicable miracles of the scriptures.

Miraculous occurrences, however, happen every day. And Ms. Frederick seems earnest enough to help suspend our doubts and ask for the reader’s faith in the mysteries of the universe and job market. If following her guide brings self-actualization or simply bread on the table, so be it.